My Oklahoma grandmother sewed draperies. She didn’t always sew draperies–she was a farm mother on a dusty plains farm for most of her life. I wish I’d spent more time with her, but I didn’t see her very often and by the time I was in my 20s, she was in a nursing home. When I was little, she taught me to crochet, but I bet she could have taught me a lot more. (She said, “Do you want to learn to knit or crochet?” And she showed me the implements. I chose crochet because there was only one hook.) One of the few memories I have of my Oklahoma grandfather was him sitting on the curb outside our house in Silver Spring, Maryland, the Christmas I was five and got my first bicycle with training wheels. He watched me ride up and down the street. He died not long after that. We visited my grandmother periodically during my childhood–by then, she lived in a little house in town in Frederick. It was a small town, and I don’t know what it’s like now, but there was still a little department store in town and a short main street with businesses. It was so different from anything I knew. I grew up in the suburbs of big cities. Even more bizarre was when we drove outside the town to visit the old farm. Just tumbled-down fence posts and deserted broken-down barns framed by an endless horizon. I couldn’t imagine my fancy mother could have possibly sprung from such a dusty desolation.

My grandmother’s house in town was the littlest house I’d ever been in. All the rooms opened into each other, no hallways. In the back she had a porch with a bed where you could sleep outside in the summer, and there was a chicken house in the yard so she could wring supper’s neck. You can take a farm mother off the farm, but you can’t take the farm out of the farm mother.

My grandparents left the farm and moved to town after my brother died in a tractor accident on their farm. This happened before I was born, but I’ve been scared of tractors all my life. Since I live on a farm, this type of lifelong paranoia is super handy. My mother never learned to milk a cow, by the way, despite growing up on a farm. I asked her about this once, after I got BP, and she told me that my grandmother told her that she was not allowed to milk the cow. If she knew how to milk a cow, according to my grandmother, she would end up marrying a farmer. My grandmother wanted “better” for her, so she was not allowed to milk.

My mother did her best, but darn it all, her own daughter left the bright lights and ran off to a farm and got a cow.

Just goes to show ya.

Anyway! After my grandmother moved to town, she set up shop in her little house making draperies for the townies, which surely means I am genetically drapery-oriented.

As if that’s not enough, there are the curtain rods that crossed the prairie. Yes, I have in my possession the iron curtain rods carried across the prairie in a covered wagon by my great-grandmother in 1904.

I come from a long, well, okay, short, line of people who honor window coverings.

And yet I loathe, despise, and abhor curtains. I used to like curtains. Curtains were a huge part of styling any home I lived in. I changed curtains frequently, always seeking the perfect curtains. Never finding them. Eventually, I realized I just didn’t like curtains. OF ANY KIND.

At Stringtown Rising, I gave up curtains completely. There were no curtains in that house. There were wood blinds on the master bedroom and bathroom windows, that’s it. No curtains or blinds elsewhere in the house.

When I came to Sassafras Farm, the first thing I did was start ripping down curtains.

There are shades in the living room and dining room, and so far, I’ve left them. They’re inconspicuous enough to be tolerable. 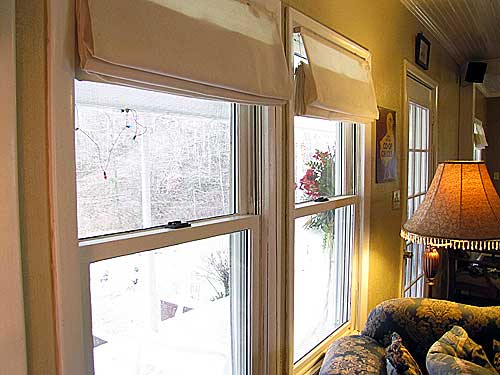 I was reaching out to rip the curtains down off the kitchen window when “my Debbie” (those of you from the CITR retreat know Debbie our cook) stopped me and implored me to try living with them a while. I’m trying. 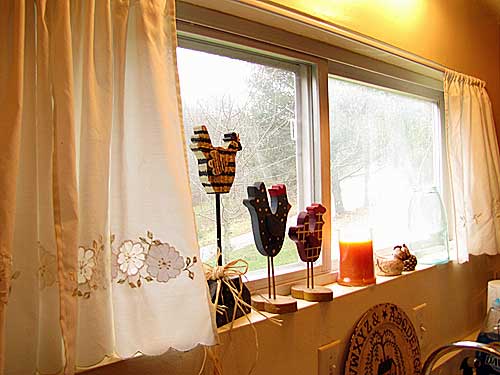 We’ll see. I pushed them all the way to the sides as far as I could.

The house at Stringtown Rising was halfway up a hill, so no curtains made sense to most people. No one could possibly see inside. Here, the house is not far from the road, but still I have never lowered the shades in the living room and I never pull closed the curtains in the kitchen. I can only live with them if they are out of the way all the time. Even at night. There are white wood blinds on my bedroom window, and I can take it there, but I can’t take anything covering a window anywhere else in the house.