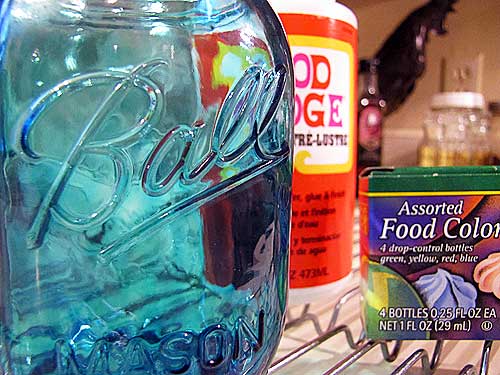 I love vintage green and blue Mason jars, but I don’t have very many of them and they can be hard to find. I also don’t like to buy jars. I have a lot of free jars already. I was intrigued when I came across this tutorial for tinting Mason jars in rainbow colors using a mixture of water, food coloring, and Mod Podge. Canning jars used to come in all kinds of pretty colors such as blue, green, and amber. Why they stopped doing that, I don’t know, but they are the most beautiful jars if you can find them.

Here is one that I have in green. 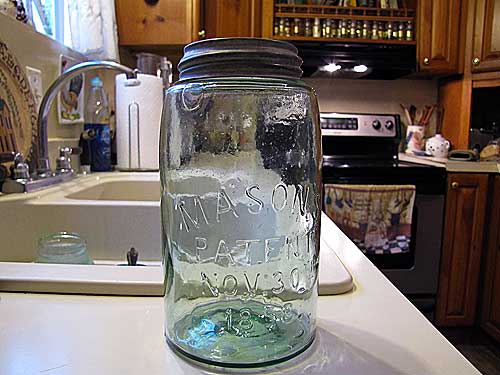 It’s the real deal, a vintage Mason’s Patent Nov. 30 1858 jar. Can I recreate that look using nothing more than a mixture of glue, water, and food coloring? I had to find out! I followed the tutorial linked above and had some trouble. The idea itself is a great one, but after a number of trials, I want to share with you what went wrong and what worked for me–so this is both a review of the process and my own tutorial take-off on the method.

One, however many jars you want to do, go with a 1:2 ratio on the water to the glue. The quantities in the original tutorial are a little fuzzy. (“A tablespoon or so,” for example.) Forget the “or so” or your mixture will be too thin. Not to mention, a 1:2 ratio in tablespoons is far too much for a pint jar. Or even a quart jar. One teaspoon water and two teaspoons glue will do a pint jar. Two teaspoons water and four teaspoons glue will do a quart jar. (You can do multiple jars at once–just multiply the quantities.)

Two, go heavy on the food coloring! I tried three drops the first time, 9 drops the second time (on a quart jar). My second attempt made a green jar similar to the color of the vintage green jar. I used that much or more on a pint jar quantity of the mixture when I made a purple jar–I wanted a deeper color. I used even more when I did a pint-sized blue jar. When you mix the water and food coloring, then add the glue and mix, you can add more food coloring to the mixture until you’re satisfied.

Three, DON’T ADD THE GLUE DIRECTLY TO THE JARS. It’s difficult to properly mix the water/dye solution with the glue in the bottom of the jar. It ends up leaving gummy unincorporated glue on the bottom of the jar that takes a long time to bake out. Mix the water/dye and the glue in a separate bowl and add all together to the jar. I find it easiest to use a paper bowl that can be put in the trash afterward. (Remember that you don’t want to be washing excess glue mixture down your plumbing.)

Four, skip the drain time suggested in the original tutorial. Take the jar directly to the oven for the best color retention.

Six, place the jar upside down on the cookie sheet for no more than three minutes then turn the jar upright (using kitchen gloves to move the jar, of course). This avoids a collection of gummy residue at the rim. Carefully wipe the rim then return the jar to the oven, upright.

Seven, my oven doesn’t have a “warm” setting so at first I set it on the lowest temperature it would go–170 degrees. Later, I experimented at 200 degrees and that worked better (faster). It also occurred to me that you could bake these in an Excal! As to the baking time, bake as long as you need to. I have found that some streaks may remain no matter how long you bake. In most cases, at 200, it takes 30 minutes to an hour, but it’s variable by the jar size and the thickness of the mixture. Once you remove the jar from the oven, let it set to cool and thoroughly harden before placing anything inside of it.

Eight, if your jar comes out too pale, re-do it (same jar). Just let the jar cool and repeat the process.

Nine, if it doesn’t come out how you like it AT ALL, run hot water into the jar with a few drops of dish soap. Let sit overnight. The next day, run more hot water and soap in the jar and scrub it out. The longer you let it sit and dissolve, the easier it is to clean. You can restore the jar to its previous sparkling clear state any time you like. 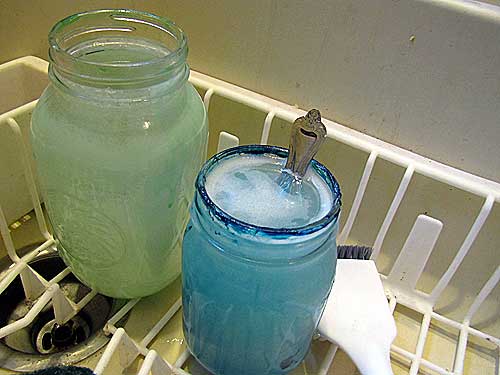 Ten, (with the above changes) it DOES work! 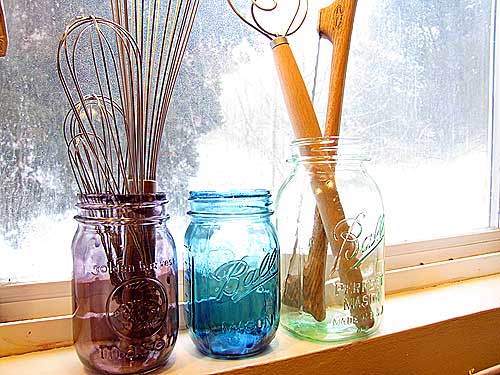 In addition to the items listed below, you will also need a bowl, measuring spoon, aluminum foil, waxed paper or parchment paper, and, of course, your jars.

Remember your ratio is 1:2 (water:glue) multiplied out to however many jars you want to do. This “recipe” is for one pint jar.

Printer-Friendly
How to Color Mason Jars: 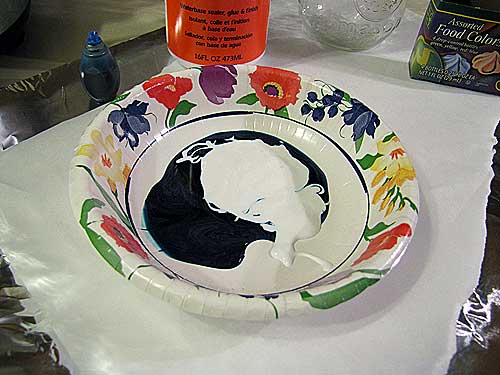 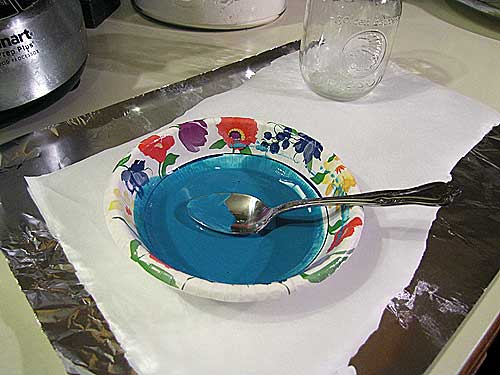 Pour mixture into a pint jar. 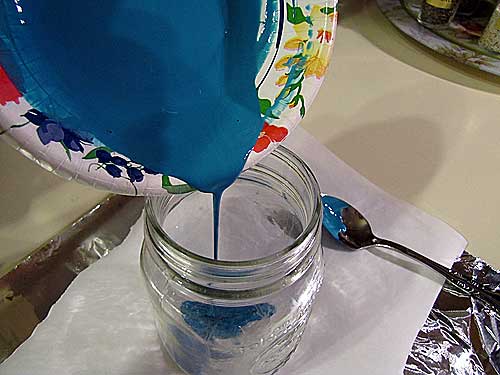 Turn the jar carefully to distribute the mixture all over the inside of the jar. 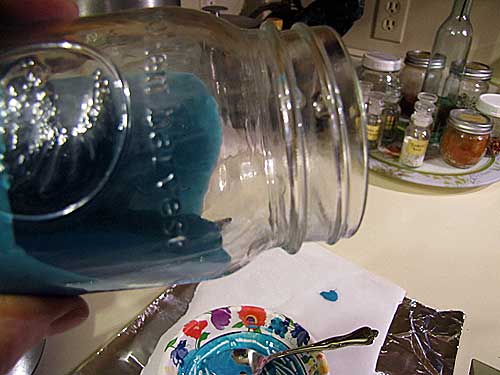 Holding the jar over the bowl, slowly pour out the mixture, turning the jar as you do, in order to coat the mouth of the jar. 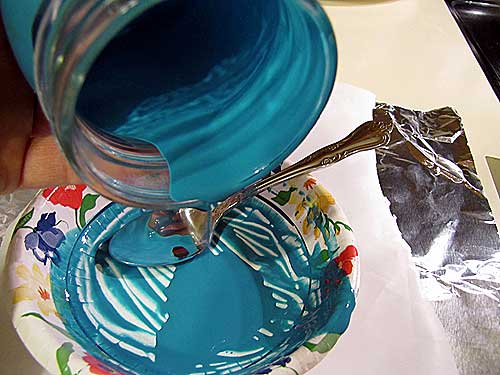 Place jar upside down on a cookie sheet lined with waxed paper or parchment paper on top of a sheet of aluminum foil. Put it in the oven for three minutes. 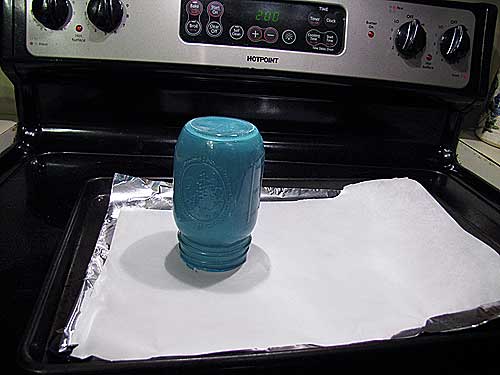 Remove the cookie sheet from the oven and turn the jar upright. Wipe rim carefully with a paper towel to remove excess then return the jar (upright) to the oven. Bake until the color is clear and beautiful. 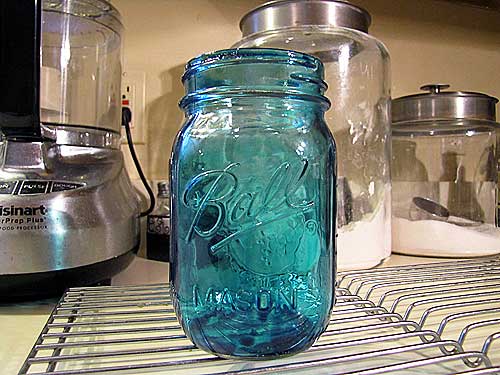 This is a very quick and easy project, and something you could even do with kids. The part in which you are actually doing something is just a few minutes. You’ll need to plan at least an hour for this project, but it’s kind of like making bread–most of the time involved, you aren’t doing anything.

Some additional notes: You can’t use jars treated with this application for holding flowers in water. The glue will dissolve. On the other hand, this is also an upside because you can always dissolve the glue and wash out the jar if you want to. Also remember that you should never use the jar for food, of course. Jars colored with this method are for craft and (non-food) storage.

Mod Podge is a waterbase sealer, glue, and finish. You can find it in most large craft stores, or online. After buying the Mod Podge, I saw this tutorial on how to make homemade Mod Podge using Elmer’s Glue with water (for matte) or the addition of varnish (for gloss). You will need gloss for this process.

If you really want to use your colored jar to hold flowers in water, you’ll have to color the jar on the outside. Here is a method using glass paint and thinner that is ragged onto the outside of the jar.

The glass paint/thinner method doesn’t appeal to me for a couple of reasons (including the special supplies), so I haven’t tried that one. The Mod Podge method is too easy–and I have other true vintage colored jars to hold flowers in water. I also like that I can find the supplies for the Mod Podge method right at home–mostly in my kitchen–and next time, I’ll even make my own Mod Podge. For non-food storage and craft purposes, I think this one is the way to go. I even like that I can wash out the jars if I ever want to use them for canning–or just change the color! (I considered trying to apply the Mod Podge mixture to the outside of the jars as an experiment, then decided that wasn’t a good idea as handling the jars during the process would be next to impossible. Being able to put flowers in water in the jars wasn’t important enough for me to pursue it. If you try that, let me know.)

My “new” green jar, left, and a vintage green jar. 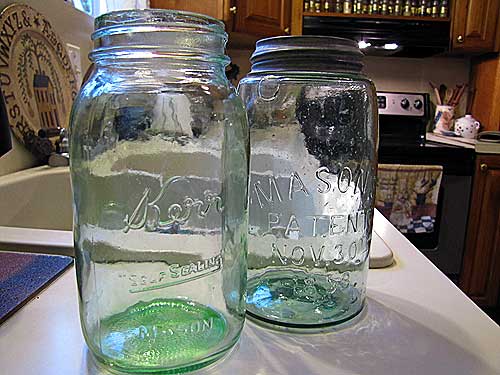 When Morgan saw me experimenting with this process, she requested a blue jar. The “new” blue jar, left, and a vintage blue jar. 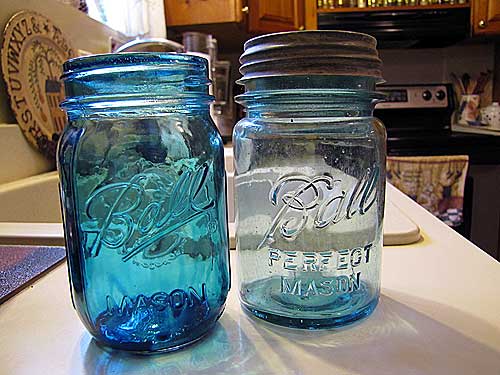 As you can see, the new blue jar has quite a bit more color than the vintage one. As I experimented, I started having fun trying for deeper color. If you’re going for a true vintage look, use less coloring. If you just want to have fun, use more.

Who’s gonna try this? If you experiment with this or another method of coloring jars, I’d love to hear about your results!