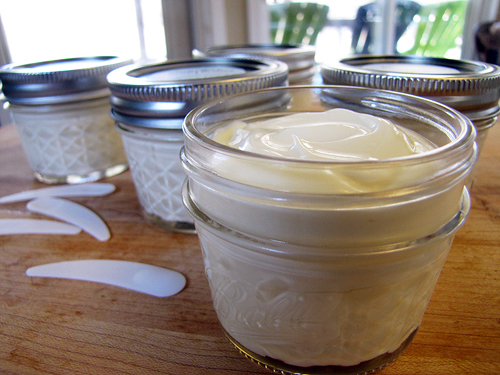 I’ve been getting a lot of questions about this lotion lately, so I decided to just post the recipe! For years, I’ve taught this recipe in all-day soapmaking classes (not that it’s a soap–it was a beauty add-on product we’d do at the end of the day) and I’ve also sold it, both in the studio and on Etsy. I’m doing neither anymore (and I’ll explain later in the post why I’m not selling it anymore), but first I want to credit the smart, generous lady who gave me the recipe to begin with, years ago–CindyP.

Many of you will remember the fabulous CindyP, who helped me learn how to make soap and partnered with me in so many learning adventures, including my very first workshop retreats back when they were held at Camp Sheppard. (What a lifetime ago that all seems like now! And so much fun.) Like me, and probably a lot of you, too, CindyP’s life has changed and grown in different ways and paths since then. Cindy is busy managing an addiction center and is doing great! Helping people as usual.

She used to have this recipe posted on her own website, but she’s not blogging anymore and gave me permission to post it here, so back to lotion. This is the basic lotion recipe as CindyP shared it with me years ago–I added aloe vera to the recipe later. (It’s optional–if you don’t want it, don’t add it.) It’s a light, non-greasy, moisturizing lotion that is safe to use on your face as well as your body. We’ll start with the basic recipe then how to incorporate aloe vera or other things to personalize it to your needs.

All of the ingredients are easy to find. Emulsifying wax thickens the lotion and holds the oil and water together. Use emulsifying wax pastilles like this

for quick melting. Glycerin comes in a solid and liquid form–be sure to use liquid glycerin

for this recipe. The olive oil can be any kind, but I always use a light extra virgin.

Heat the emulsifying wax, olive oil, and glycerin on low until wax is melted–this will only take a few minutes. Cool to 110-120 degrees. Combine with the water and blend until lotion-like–I use a stick blender, but you can also use a regular kitchen mixer. The lotion thickens further as it cools. Makes approximately 24 ounces.

Note: This is hard to make on a hot day! I can’t tell you how many hot summer days in the studio I watched attendees struggle to bring their lotion together. I learned over time that the best thing to do was refrigerate their bowls of lotion when that happened. Chilling the lotion brings it together and thickens it quicker. We’d chill the lotion, move on to another project, then come back to the lotion a little later and they could finish it quickly and easily.

1. Add several drops of aloe vera after the lotion is made and just stir it in.

2. Replace part of the water with several ounces of aloe vera and incorporate it from the beginning.

I’ve done it both ways–it really depends on how much aloe vera you’re putting in there. If you’re only adding it by drops, it’s just as well to add it at the end. If you’re going to add quite a bit, as in several ounces, it’s best to replace part of the water with the aloe vera liquid at the time you blend the mixture with water. How much aloe vera to include? Though we usually did it by drops at the end in workshops, for the lotions I sold, I would add several ounces and incorporate it as a replacement for part of the water. (Adding several ounces at the end can upset the balance of your lotion.)

A few drops or several ounces? Up to you!

What about other stuff? Liquid vitamin E! This is great to add in also, along with just about anything you can think of that may suit a personal need or desire of your own. You can add fragrance or essential oils–several drops at the end–as well, but—-

Caution! Fragrance and essential oils can irritate sensitive skin, and even not so sensitive skin. I never sold this lotion scented, and didn’t usually let people scent it in workshops either. Sometimes attendees would request to scent it, and I would only allow them to add fragrance after their group had completed the lotion and divided it amongst themselves. Then I would allow them to scent their individual take-home container if they wanted. I don’t consider my own skin to be sensitive, yet even I would find fragrance irritating when added to lotion, so be careful. If you want to try it scented, separate a small amount from your batch, add a drop of your chosen fragrance or essential oil, and test it on your skin before scenting the whole batch.

Why did I stop selling it? This is a preservative-free product. When I was still doing workshops and selling it in the studio (I only taught the recipe in all-day soapmaking workshops) and also had started selling it on Etsy, I could go through quite a bit of it in a short time. Now that I’m not selling directly out of the studio anymore, I can’t go through as much lotion as quickly as I did before. Even kept refrigerated, the lotion will go rancid after a few months. This is why I always sold it in small 4-ounce jars that people could use relatively quickly, and always recommended keeping it refrigerated or in a cool place. Since I can’t sell as much lotion as quickly as I used to when I was selling out of the studio also, I just quit selling it because I would have waste–I’d have to throw out whatever didn’t sell in a short period of time. For this reason also I suggest you don’t double or triple the recipe thinking a large batch would be more efficient. Unless you are a heavy duty lotion user, a large batch could lead to waste.

Can you add preservatives to your homemade lotion? Sure! I just didn’t want to do it. I prefer a natural product, and there is no natural preservative that will extend the shelf life of homemade lotion to the same extent as you’ll find in commercial products anyway. To me, hand-crafting a natural, preservative-free product is a main point in making it at all. If you want to add a preservative to your lotion, you’ll have to research elsewhere for that information. My recommendation is to make small batches that you can use in a short time period, divide it into small jars and keep currently unused jars refrigerated, always keep your current jar in a cool place in your home, and don’t touch it directly in the jar. No matter how much you wash your hands, you still run the risk of contaminating the jar by dipping your fingers directly into it. Use a popsicle stick or small spoon to dip in your jar. I always provided a tiny beauty spatula with each jar when I sold it. (Look again at the photo at the top of the post and you’ll see them beside the jars.)

Enjoy your home lotion-making! I hope it opens a world of new possibilities to you. I also made a version of this with cocoa butter and shea butter. I can post this recipe at another time if anyone’s interested?