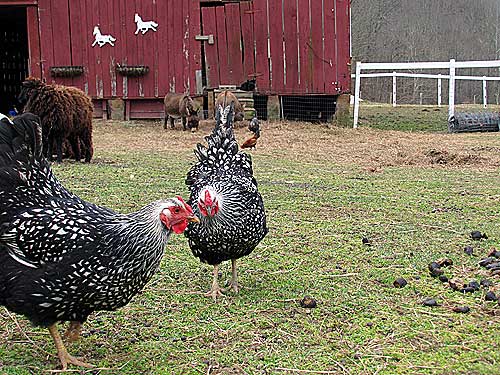 Another good news story–the chickens are mostly staying in the barnyard and barn now!

Yesterday was unbelievable! I never imagined that my Kickstarter project would actually meet its funding goal yesterday! I am in shock! But not in so much shock that I can’t keep using a lot of exclamation points!!!

Please hang in with me and watch it until March 3. It will be funded officially on Saturday, March 3 at 11:37 a.m. EST. Pledges are not actually charged until then. Early on, a sizable pledge was cancelled, which has made me nervous ever since. And I do understand that life happens. (Maybe their plumbing broke!) Perhaps something significant happened in this person’s personal life to change their circumstances. (I didn’t recognize the name as one of my readers here, so it may have been someone browsing through on Kickstarter and they simply changed their mind. I don’t know.) In any case, it did make me aware of the fact that I could be funded, and then suddenly not funded, and the project won’t be entirely safe until 11:38 a.m. on March 3. (Some degree of over-funding would be a buffer against last-minute disaster.)

Meanwhile, I’m excited and optimistic!!!!!!!!!!!!!!!! I have my handy construction team, Matt and Dave, scheduled to come back to work on the studio starting the third week of March. I asked them to clear the decks and work straight through till they finish! It will be two weeks after the close of the project on March 3 before the funding is released to me, which is why I scheduled them to start the third week of March. Starting on March 3, I will be contacting each and every one of you to go over the rewards and your individual choices, and also to check the name you want used on my “studio angels” page on my website as well as on the studio wall. Also, some people have already indicated to me that they prefer to not be named, so I will be confirming that also before using anyone’s name anywhere.

THANK YOU SO MUCH!!!!! I am just still shocked and overwhelmed and excited beyond belief. The studio is going to happen!!!! You did it! I am amazed over and over at the incredible support that you give to me, in so many ways. I’m justawriter (and usually get more credit than I deserve). You are the ones who make this website and make this community. Thank you more than I can express.

I canNOT believe that happened yesterday!!!