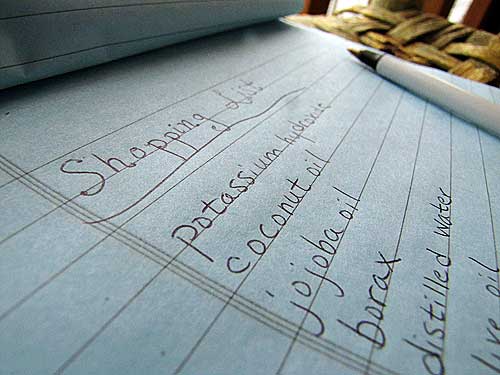 I’m studying on liquid soap. I always have to study on something new for awhile before I take the plunge. Study is possibly another word for procrastination, but even if you’ve made “regular” hard soap, liquid soapmaking is a little bit different, just different enough to require some study.

What goes into liquid soap? Liquid soap, like any soap, is created by combining fat with lye. The fat can be all sorts of things–-but for liquid soap, as opposed to hard soap, coconut oil (for lathering) in combination with soft oils is recommended. Soft oils are generally oils that are liquid at room temperature (such as olive oil).

You don’t have to learn how to make hard soap before learning to make liquid soap, but if you’ve already tried your hand at hard soap, you’ll find some of the procedures in liquid soap to be comfortingly familiar. I’m going to be making liquid soap by the hot-process method. You can use a crock pot, a double boiler or even the oven. Liquid soap starts with melting the fats/oils then combining the lye and water. (Use soft or distilled water. The minerals in hard water cause cloudiness in liquid soap–so while you may get away with that in hard soap without notice, it will hurt the look of your liquid soap.)

There are two distinct methods for making liquid soap, both of which diverge from the process of making hard soap after the first few steps. The “paste” method is much more similar to making hard soap. In the paste method, you use a stick blender to stir to trace then cook the soap to a paste before proceeding with dilution. In the “alcohol” method you add ethanol or isopropyl alcohol to the liquid soap mixture immediately after adding the lye/water mixture to the fats/oils and rather than stirring with a stick blender to trace, you stir until you have a homogenous mixture then cook a sort of soap “soup” on a continuous boil.

In either method, the soap is diluted with more soft or distilled water after it finishes cooking. The alcohol method has the advantage of being more easily diluted and producing a clearer soap. (The alcohol can be evaporated out of the soap, by the way.) The alcohol method also doesn’t require the stick blending to trace, so it’s a little easier that way, too, but you have to wrap the top of your pot with thick plastic held on by bungee cords, so it’s a little more like a mad scientist project.

Because it’s so important that all the fatty acids in clear liquid soap are saponified (to avoid cloudiness or separation), many soapmakers formulate their recipes with a lye excess. Potassium hydroxide flakes intrinsically contain water and other impurities, up to 10 to 12 percent, which means the lye excess in liquid soap recipes is not as high as it initially appears. Even so, liquid soap made this way must be further neutralized to get rid of the excess and lower the pH. This is done by adding a solution of boric acid, borax, or citric acid after diluting the soap (in either the paste or alcohol method). Until you are experienced enough to formulate your own recipes, it’s a good idea to use recipes from expert sources. I’m using the book Making Natural Liquid Soaps

by Catherine Failor, among other resources.

After neutralizing the diluted soap, you can add dyes and fragrances then the liquid soap is “sequestered” for one to two weeks, meaning it’s allowed to sit undisturbed to settle. (Actually, you could safely use it right away, but allowing the soap a “rest time” will add brightness and clarity.)

Today, liquid soap tends to be much more popular than hard soap. While I love the look and feel of old-time hard soap bars made in a plain mold and cut in thick slices (wow, what looks more awesome than that?), in practical terms, many of us want the convenience of a liquid soap. Morgan, in fact, refuses to use the hard bars I make. She prefers liquid soap. I know that many of the people I give gift bars to also prefer liquid soap. I want to learn to make liquid hand soap, shower gels, and shampoos. And so, while hard bars have their place, there is a lot of room for liquid soap, too. It’s the next step in my soap journey.

Who’s coming with me?

Here’s a list of things to gather if you’re going to get ready to make liquid soap. If you’ve made hard soap before, you probably already have most of what you need.

You can find potassium hydroxide on the internet at soapmaking suppliers, along with various fats/oils (some of which can also be found at the grocery store), and dyes and fragrances. You can find borax at the grocery store. You can find citric acid at some grocery and health food stores or online at various types of suppliers. If shopping online, just do a search on the ingredients you’re looking for. A couple of suppliers I use are Wellington Fragrance and Bramble Berry. You can get potassium hydroxide at Bramble Berry. I prefer Wellington for essential oils, etc.

Get ready! I’m laying in the supplies and will be posting my adventures soon. Liquid soap, here we come!

P.S. You can also make liquid soap with milk, and I’ll be trying that, too. Gels, by the way, are a slightly different process, and will be another adventure. There’s more than one way to make a gel, one being the inclusion of alcohol and glycerin. (Another method, for gel recipes with high proportions of soft oils, is borax.) Liquid soapmaking includes many mini-adventures within it.

Want to try hard soap first before taking the liquid soap plunge? See all my soapmaking posts here for my hard soap tutorials.