Bear with me. I’m sure I’ll be obsessed with something else tomorrow! Like getting the new halters on Glory Bee and BP.

Meanwhile, back in my soap laboratory, I was haplessly intrigued by the number of people who wrote encouragingly about a dry mixture. I haven’t used dry laundry detergent in years, and it was store-bought. It tended to not dissolve properly and nobody in my house liked it. (I always made the kids do their own laundry, as soon as they were old enough to reach the washer knobs, and they complained long and loud about dry detergent. Me, too.) But, I’ve never tried it with homemade laundry detergent. With all my homemade laundry concentrate methods focused on reducing the storage required, I decided it was time to stop being stubborn and try a homemade dry mixture which most certainly would require less storage space.

I didn’t want to run to the store for store-bought soap, so I broke down and made some homemade laundry bar soap. It always makes me feel guilty and lazy to buy store-bought soap when I’m perfectly capable of making it myself. It’s better and it’s cheaper.

I have a Hot Process Soap in a Crock Pot tutorial if you’ve never made soap before. I have “regular” and vegetarian versions of the recipe.

These are two pound recipes.

Add 1 ounce of scent, if you wish. This recipe traces and cooks very quickly.

Here it is going in the mold: 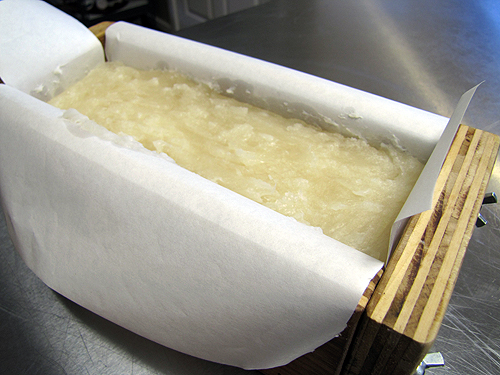 You can see how super-sudsy it is by the bowl when I ran water in it. (I usually put my soap in a bowl to stir it up some to cool before going in the mold–if I’m going to add fragrance, which I did this time.) 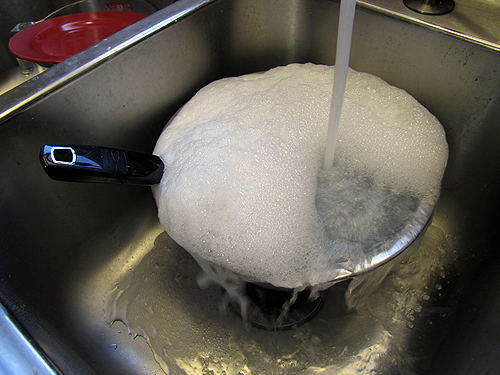 Out of the mold and cut: 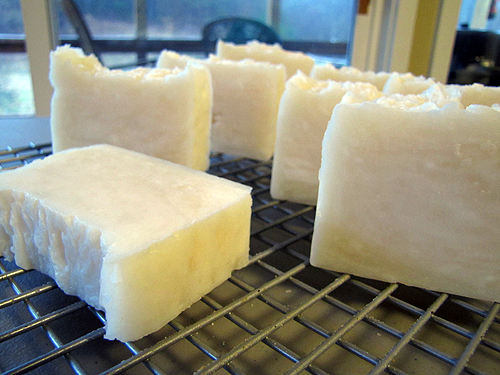 If you don’t want to make your own soap, the most popular brands I hear people talk about in reference to the bar soap for homemade laundry detergent are Fels Naptha, Zote, and Ivory.

Dry is the only thing I haven’t tried, so why not?

First, what goes into homemade laundry detergent and why? Most recipes for homemade laundry detergents include Borax. Borax is a natural ingredient, sodium tetraborate, a boron mineral and salt which is mined from the ground. There’s an interesting discussion of Borax here. It’s very effective, as the box states, at removing stains, neutralizing odors, and cleaning. Baking soda is sodium bicarbonate, another natural product that contributes to cleaning and adds softening and freshness as well. Washing soda is sodium carbonate, also natural, which can help with hard water issues and boosts cleaning. These are all soap enhancers, so combined with soap in a mixture, you have a strong detergent that’s not synthetically-based like the detergents in the store.

Since my homemade soap is natural, this makes an all-natural homemade detergent. I like to know what’s in stuff.

Laundry detergent is highly personal. Everyone has different issues. You may want to use more or less of any given ingredient depending on your needs. Several people mentioned adding Oxiclean (or a generic oxygen cleaning equivalent) to brighten whites. I work on a farm and I avoid whites like the plague, so that’s not a big problem for me. If it is for you, you could add it to your mixture, or add it separately for specific loads. You can add 1/4 to 1/2 cup (or, you know, just a big splash, which is what I do) of white vinegar to the rinse cycle for softening. Vinegar also helps to remove any remaining soap. Take any homemade laundry detergent recipe as a starting point–once you start experimenting, you’ll come to know what works best for you.

To try out a dry version, I made a small test batch. You could double and so on to make as much as you want. This just makes about a quart jar. 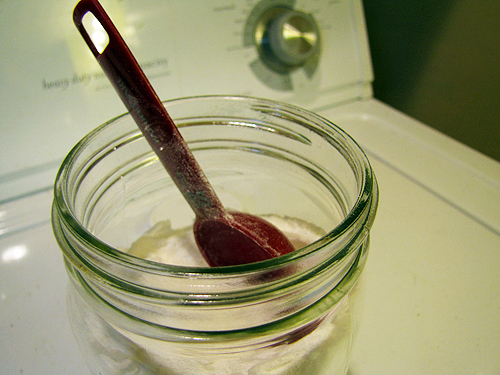 Just–stir it together and you’re done. Use one to two tablespoons per load.

Now, time for the test–a load of laundry and WILL IT DISSOLVE? And I’m rooting for it because THIS IS SO EASY.

Maybe too good to be true.

I washed some towels and a throw that sits on the ottoman in my living room–often Gwennie and the cats will sit on it, and there was an orangey cat throw-up stain on it. I did no stain pretreatment for the extra challenge. I started the washer on the Warm-Cold setting (which is what I most often use), adding a couple tablespoons of the dry detergent mixture. I checked several times and it looked as if the mixture had, indeed, dissolved. I added a splash of vinegar in the rinse cycle then put the load in the dryer. It came out clean and fresh-smelling, and the stain was gone.

I think I’m a convert! Though I also think my next laundry experiment will involve real homemade liquid soap, added separately from the rest of the dry mixture. However, I don’t have time to make liquid soap right now. My next experiment will actually be getting new halters on the cows and the farrier is coming this weekend, so I’ll get back to laundry detergent later. Thanks for sharing your ideas! And I hope this helps anyone annoyed and struggling with homemade liquid laundry detergent issues. Try dry!