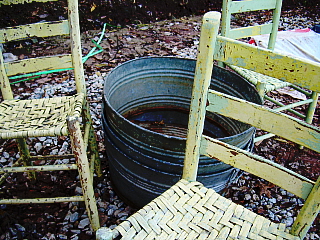 Then I got into the shabby chic look on these weathered yellow ones. And I had to have these wash tubs that would make great garden pots, and there was this really cool rusted manual tiller thing that would look awesome sitting in front of my imaginary barn and….

So I went to an auction on Saturday. I’ve never been to an auction before. This auction was actually held at the house/farm, so it was interesting to poke around there. Ralph Vineyard was 82 when he died and he’s distantly and indirectly related to my family. (In this county, who isn’t?) And yet somehow he didn’t even leave me a chair with no bottom. Go figure.
:fryingpan: 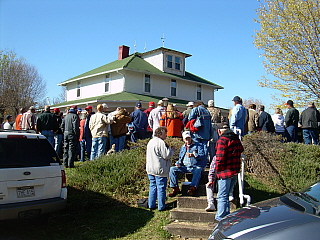 The old farmhouse sits on a hill at a major one-lane road boonies intersection and is something of a landmark around here, so it was fun to walk around the house and farm. I had to stand around and listen to the auctioneer for a few hours before I could even understand what he was saying, and of course the chairs were the last thing they got around to selling off. After I got the chairs, people kept telling me, “Those are great chairs. You can sand them down, paint them, put new bottoms in them.” Like they were trying to cheer me up after this burst of insanity in which I bought three amazingly crappy chairs. You should have seen the blank looks on their faces when I’d say, “I don’t want to fix them up! I wanted them because they are so crappy!!!”

Isn’t it obvious they are perfect shabby chic plant stands???