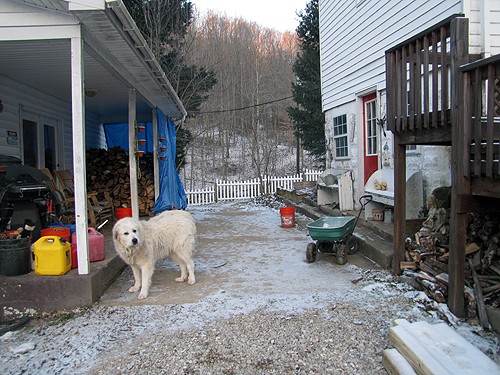 The cellar is a curious little building behind my house, and has (oddly) become one of my favorite places on the farm. I’m not sure how old it is–the barn is from the 1890s and there was an original farmhouse here that burned down. The house where I live was built in the 1930s. I don’t know if the cellar pre-dates the current house or not, but most likely. It was dug in to the hillside behind the house, and at one time was used as cellars were typically used–to hold the bounty of summer in glass quart and pint jars. 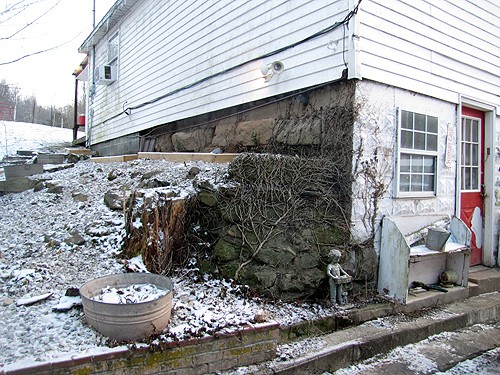 The cellar underwent a few changes through the years. At one point, the studio building was built on top of it. Also at some point, someone decided to let some light into the cellar by installing a door with a window and also two windows in the front wall.

This “innovation” ruined the cellar for its intended purpose. It no longer remains cool in the summer, despite its block walls and being mostly underground. Sun comes in the windows, and in the summertime, it can get quite warm in there. The windows also add to cold in the winter, which contributes to pipes freezing. Water pipes for both the house and the studio run through the cellar. I solved this problem first with a space heater then, recently, having a gas heater installed. Since there’s no place to hang the heater on a wall, it’s hung from the ceiling using metal straps. (Ingenious idea of my hired men.) I have free gas, so I can now keep the cellar (and the pipes) toasty all winter and it doesn’t cost me any electric. 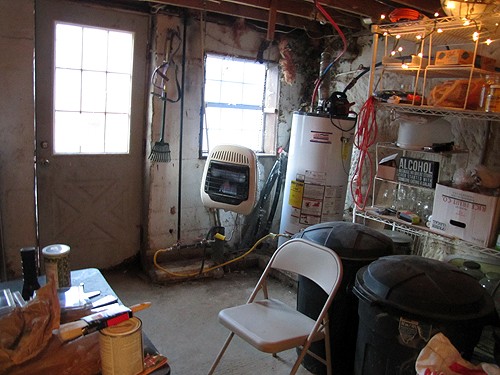 The only canning jars I keep in here are empty ones, for storage.

I keep feed here in large trash cans. I also store a lot of over-stock for the house and studio in here, as well as a random multiplicity of parts and pieces and tools and supplies for the farm. It’s the go-to spot for hired men. They arrive at the farm and head straight to the cellar, whether they’re looking for the portable jump starter to get the tractor moving in the dead of winter, or a hammer, or nails, or fence staples, or plumbing or electric parts, or just about anything.

It was, however, a total mess, involving bumping into things, stepping over things, searching through crammed shelves and drawers and even on the floor for whatever they were looking for on a given day. One day last fall, they got pro-active and suggested (emphatically!) that they help me clean out the cellar! Because, pretty much, I think they couldn’t stand it anymore.

They carried almost every single thing out of the cellar and dumped it on the patio. I made keeper piles and burn piles and “do you want to take it home with you, I don’t want it” piles. Then what was going back in, went in, only much more orderly. And there was actually space to sit down, and with the cool weather coming in, soon enough they’d be arriving and sitting in the cellar on turned over buckets to discuss what the plan was for the day. 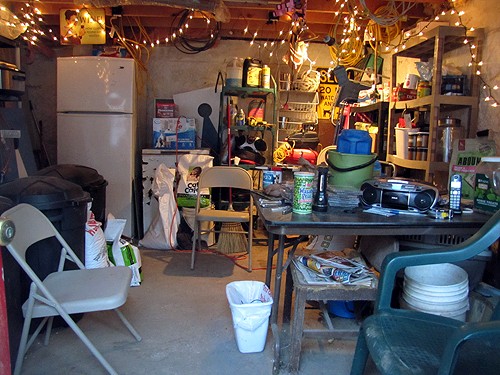 So I brought them some chairs from the studio. 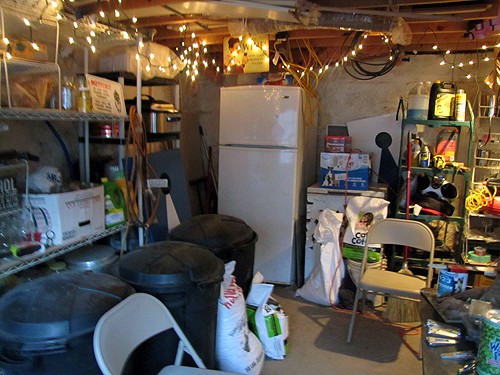 And soon enough we were all sitting around talking at the beginning of every work day, and at the end, neighbors would stop by and we’d be having a drink. So I started stocking the cellar fridge with all kinds of drinks–bottled water, sodas, and an assortment of alcohol so I had something handy to serve when friends and neighbors came by. And then my hired men said, you really need some music in here. 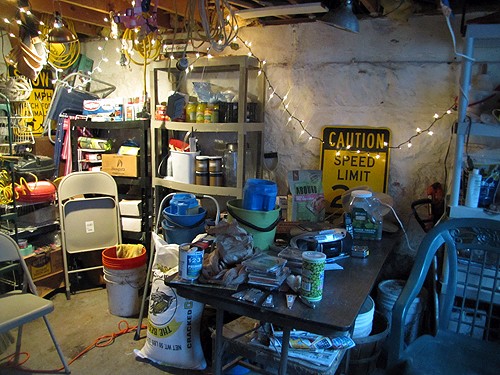 So I brought in a CD player and some CDs. And then I was taking the Christmas tree down and instead of packing the lights away, I hung them up in the cellar–that seemed like easier storage, they won’t get tangled!

And before you know it, it became the Sassafras Farm Bar and Club. Whether it’s hired men or neighbors or friends, everyone ends up in the cellar. Lights, music, drinks, and there’s even been some dancing. 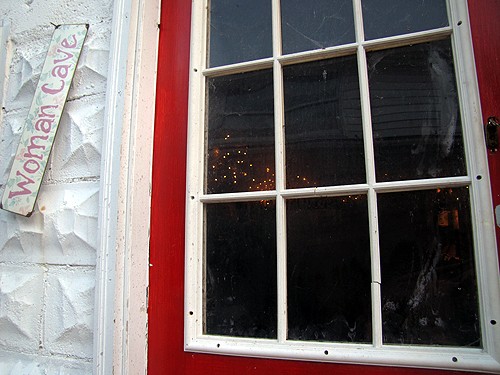 But if you stop by for a visit, I’ll offer you a libation. Just don’t mind the spiders.