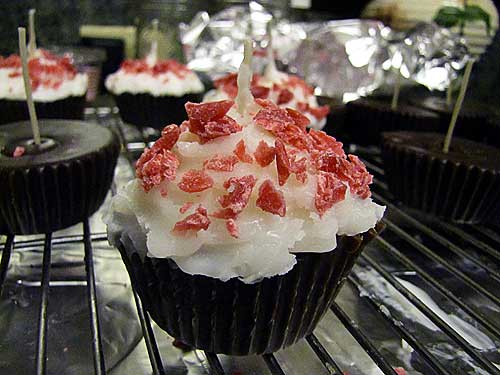 I have no reasonable excuse for why I’m making cupcake candles when I should be making holiday gifts and baking cookies, but I was in the midst of a container candle-palooza when I got bored with container candles and wanted to do something more creative. I’ve been wanting to try cupcake candles ever since I made a cake candle a while back. Cupcake candles use the same method for the frosting. (Whipping the partially-cooled wax.)

Melt and dye your wax. I’ve been using a lot of soy blend wax lately–and I love it–but soy wax is a little soft. (Great for container candles, not so great for stand-alone candles.) For these cupcake candles, I used a mix of regular container wax and pillar wax. (You don’t have to buy pillar wax. I don’t. I buy those cheap-cheap-cheap sets of holiday pillars you can find on sale at this time of the year in discount stores and re-melt them. If you get them cheap enough, it’s less expensive than buying pillar wax.) The pillar I used was already a light brown. I added more brown dye (a LOT of it) and a little bit of blue dye. Brown + blue = black. I was going for a dark, rich chocolaty brown.

I test and test until I get the color right–wax sets up lighter than it looks in the pot. You can tell a little bit by the utensil you’re using to stir your pot, but I also keep a “test” jar around and pour a little into it to really get a good look at the color before I pour my candles.

When I was satisfied I had the chocolaty look I was going for, I added some “vanilla crunch” fragrance oil (because I had it from my free stash) and poured the cupcakes. 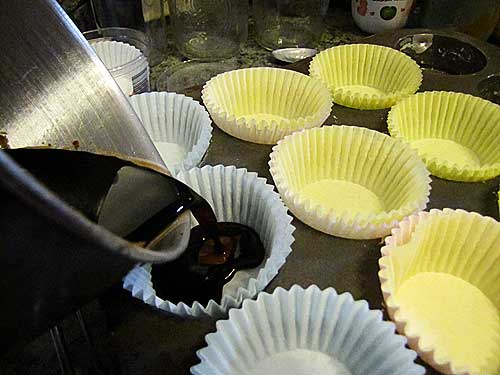 I filled the cupcake liners almost to the top but not quite. 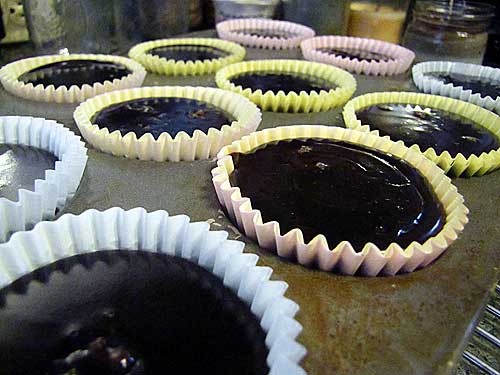 Notice I haven’t put any wicks in there. Yet.

There’s nothing to affix a wick to since I’ll be removing the liners. To put a wick in the cupcakes, wait until it starts halfway setting up then just poke the wick in there. 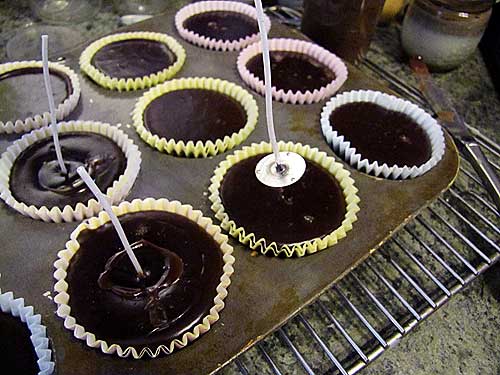 We’re not worried about how the top looks. We’re going to frost it anyway. 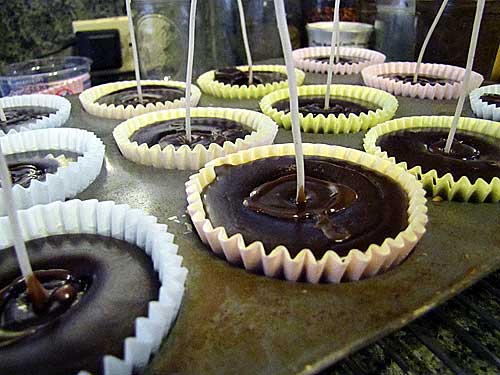 Within about 30 minutes they’d set up enough that I could start loosening the liners then removing them. See the pattern left behind by the liner? 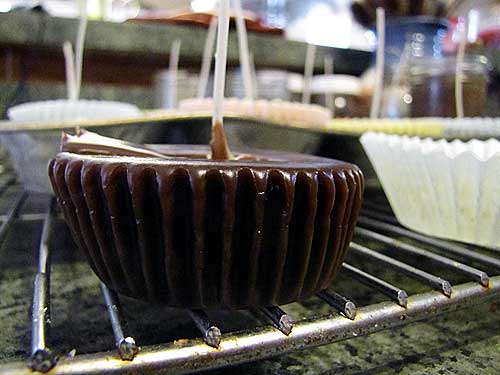 Leave the candles alone for an hour or two to let them completely set up. While I was waiting, I made some “apple pie” scented container candles. I used red dye mixed with a bit of brown to deepen the color. I had twice as much scent as necessary and made them really strong. 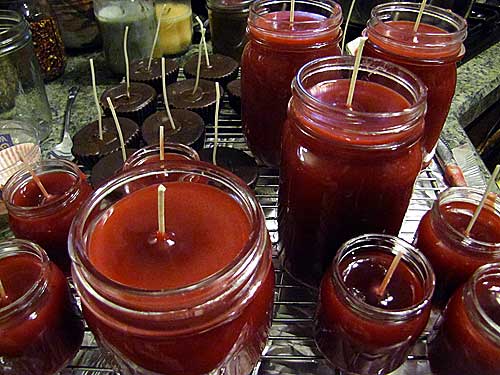 Back to the cupcake candles…. Melt the wax for your frosting. I used the soy blend container wax for this part. I wanted creamy white frosting, so I didn’t add any dye. Once the wax is melted, remove the pot from the heat and let partially cool. Add fragrance oil before it cools too much. When you see a “skin” starting to form on the top of the melted wax, it’s ready. Whip it with a wire whisk. The wax beneath the skin will still look clear and melted, but when you whip it, it will thicken up–-just like real frosting.

Once the wax reaches a workable consistency (similar to frosting) use a spoon to scoop it out of the pot and scrape it off the spoon with a knife, transferring the wax to the tops of the cupcakes. Work quickly–the wax will harden quickly once you take it out of the pot. You can only do one or two cupcakes at a time. 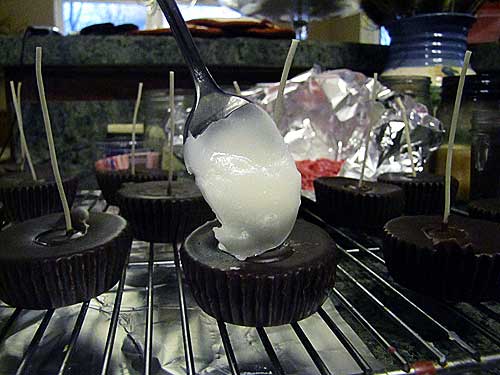 Spread the wax with a knife. 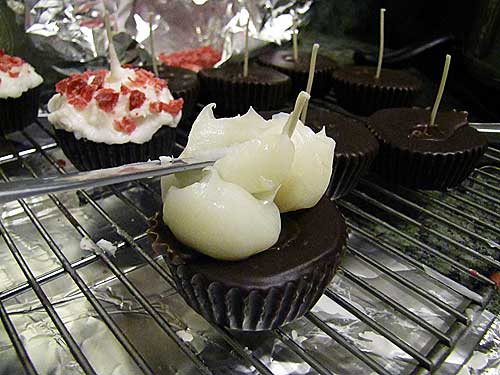 The “candy sprinkles” on top are bits of wax I had been scraping out of a jar to recycle the candle. 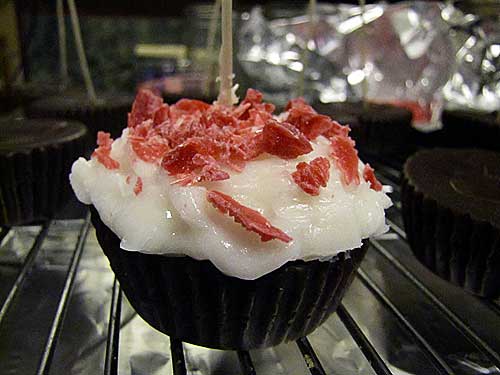 If your frosting hardens up past a workable consistency, just melt, cool, and whip it up again to finish.

Morgan didn’t even give me the “whatever keeps you busy” line. She just snatched one up and made off with it. 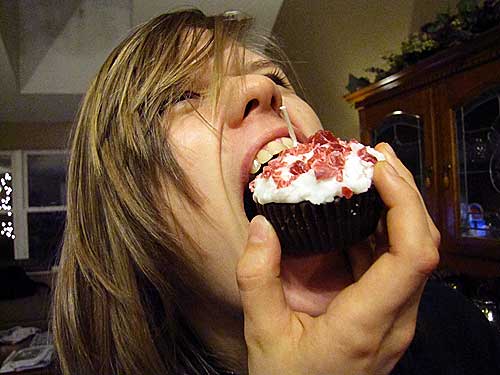 (She didn’t really try to eat it. But she did take it to her room.)

I had so much fun making these. 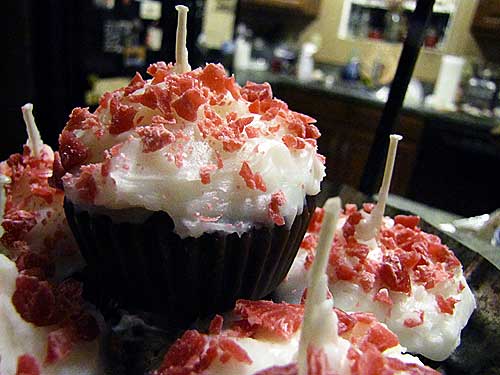 P.S. I have a bunch of candlemaking posts here with how-to’s, tips, and fun ideas.