Milk soaps are popular because they’re naturally nourishing, but they’re also naturally darker than soaps made from a water base because of the reaction of the lye to the sugars in milk. When mixing milk and lye, the milk will turn an orange color. Later, this color translates to a dark brown in the finished soap. The most common way to minimize this is to freeze the milk to a slushy consistency before adding the lye.

In the photo below, the soap on the left is made from a normal combination of lye and milk where the milk is simply at refrigerator temperature. The color is like fudge. 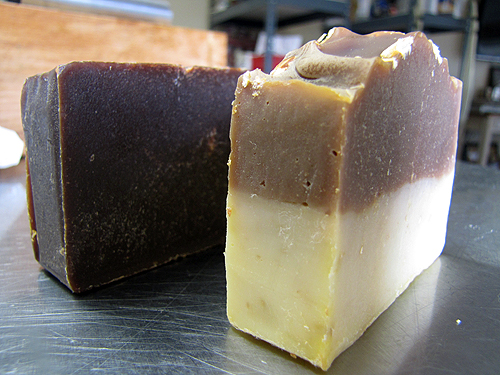 So, yes, the frozen-slushy consistency helps lighten the finished soap. Some. What if you want to lighten it more? (There’s nothing wrong with the darker appearance, by the way. It doesn’t have any effect on the qualities of the soap. It’s an aesthetic matter, and a personal preference.)

Since I’ve been milking goats again, I’ve been researching how to make a lighter colored goat’s milk soap. One method I discovered is the use of powdered goat’s milk as an additive mixed into the soap at trace. I’m not interested in that method. (It seems a little disingenuous to me, not to mention that the whole purpose–for me–is to create a natural goat’s milk soap fresh off the farm.) After researching across numerous websites and forum discussions, and talking to some soaper friends, I came up with several ideas that I wanted to experiment with, using the cold process method. (You can forget about making a much lighter colored milk soap with hot process.)

Then! Yes, then! After mixing the lye-milk mixture with your oils, bringing it to trace, and transferring the soap to the mold, place the mold in the refrigerator for 24 hours. The refrigeration prevents the gel phase–the point where your cold process soap heats in the mold. This also, of course, slows saponification.

This is a cold process goat’s milk soap made by this method, after 24 hours. 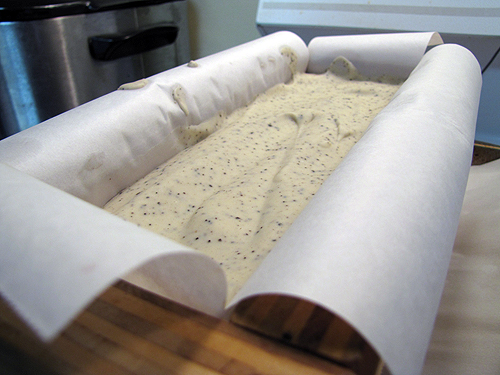 After 24 hours in the fridge, I set the mold at room temperature for another 24 hours before unmolding and cutting into bars. 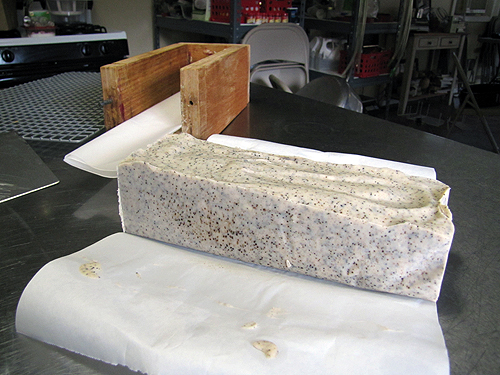 I expect the cure and hardening time to finish the soap to be longer than usual due to interrupting the gel phase, so I’ll be testing it periodically to see how long it takes to finish, and also take more photographs as time goes by to test color changes. I don’t expect the soap to stay this light, but I’m hoping for something lighter than I’ve achieved before. 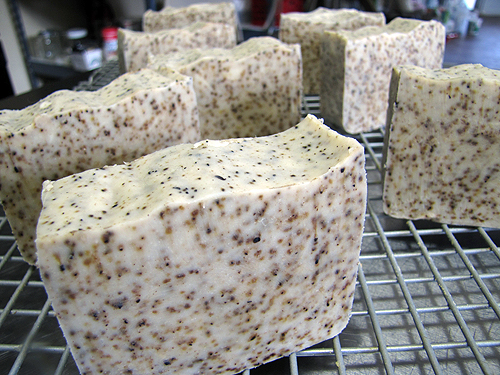 So far. Color changes take time. I’ll post again with my results as the soap cures.

Have you experimented with milk soaps? If you’ve got any ideas, I’d love to hear!