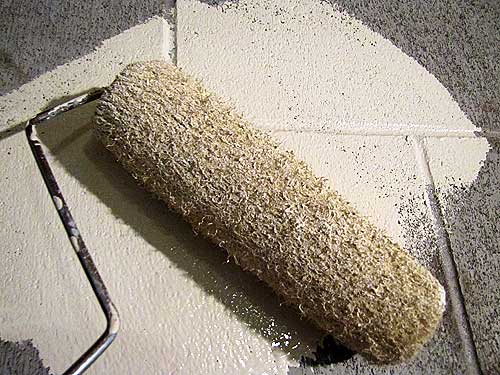 Remember the downstairs project? I’m working on it! I moved on from the idea of a bed and breakfast. Farm stays! I want to have farm stays. So much better than a B&B for several reasons. (Difference in regulatory requirements being one of them.) I don’t actually want to provide accommodations on a regular basis, like a B&B. Farm stays are more periodic, seasonal, and limited in number. That’s perfect. I have a page set up here, though it will be a while before I’m ready to start. The bedrooms will be renovated last, so that will come at the end of what is a long-term project downstairs.

In the meantime, I’m moving forward on preparing the workshop and demonstration area so that I can provide day workshops. The day workshops are still a way out, too, as it will be some time before I have a sufficiently equipped kitchen set up downstairs for cheesemaking, canning, breadbaking, soapmaking, and candlemaking. (Won’t be happening this year.) However, what I can do this year is get the area cleaned out and painted, along with some of the other basic finishing, to make the space useable for demonstrations during this year’s Party on the Farm. This whole project will roll out in phases one at a time as we’re able to get the work done (and we’re doing it all ourselves) and can afford it. (I’m renovating on a frugal budget!)

The initial work in Phase One of this overall project has been the cleaning out and clearing out of a lot of boxes. I gave a lot of stuff away to the local Salvation Army as well as books to the library. I also got rid of the giant weight bench set that was taking up a huge amount of space. (The boys had given me permission to dispose of it now that Ross is in the Navy and Weston is headed for college.) 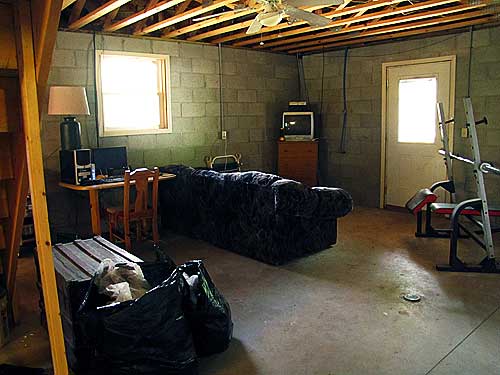 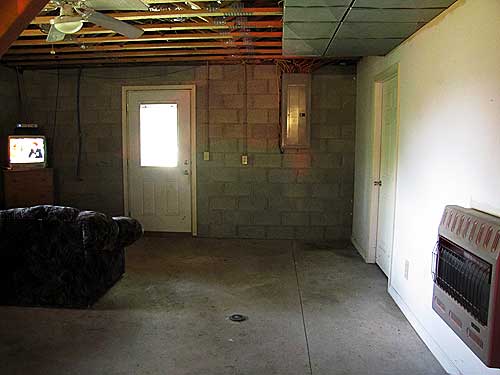 There is a huge open space downstairs, divided in the middle by a staircase. This half of the basement (where the weight bench was) is the “den” of the boy cave that this area has been. There is a desk with a computer and printer, and a couch and TV. I’ll probably keep the desktop computer down here and the desk–they could be useful on occasion during workshops! The couch will eventually be exchanged for other furnishings more in the “vintage farmhouse style” that I’m going for in the space, but furnishings and decor are on the list further down the road.

The other half of the large open space downstairs will be the workshop/demo kitchen area. I’ll need a refrigerator, stove, sink, shelving for equipment and supplies, and a large table/counter for working. I won’t be making any appliance purchases right away, but by Party on the Farm time, I intend to at least have that space cleared out, painted, and a table and portable burners for demonstrations. It’s a start! Currently, the space has been mostly cleared out from the staggering stacks of boxes, leaving a few remaining things that will be moving soon, including some feed storage and some lil brooder chicks. 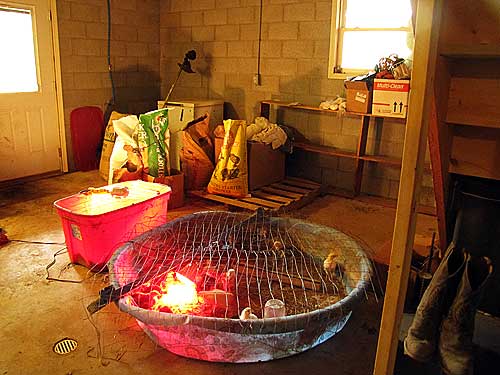 (There are also two bedrooms downstairs–which will eventually be renovated for the farm stays–and a large bathroom/utility room.)

As I’ve explained before, this is a “basement” that is not a basement. It’s the first floor of the house, entirely aboveground. The only way to actually stand in front of our house is to stand in the goat yard, because the goat yard is our front yard. 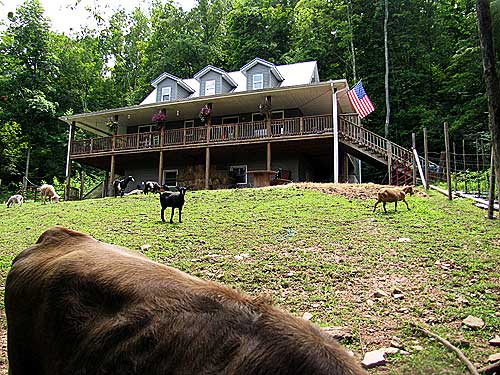 Not one inch, on any side, is underground. It was originally intended to be a belowground basement, but there was too much rock, so instead of digging down, it was cheaper to build up. And so we have the unbasement, the non-basement, the basement that is not a basement, which confuses people every time I call it a basement.

I can’t go into the goat yard without Glory Bee hounding my every step. 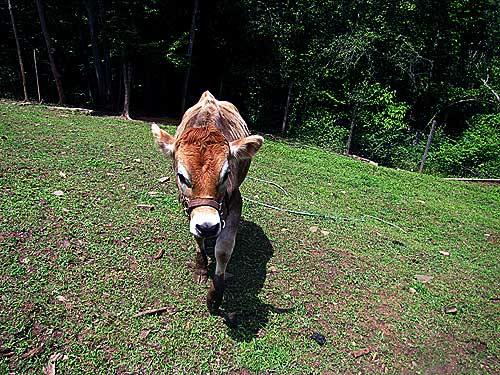 She’s not after a treat. She’s after having her head scratched and rubbed and petted and patted. I have a giant calf who is addicted to massage.

So, waiting for the brooder chicks to grow up and move out (in about a month), I’m starting with the “den” space. It will remain a sitting room area, with cuter furnishings. A place for people to sit down and relax after a workshop, and a place later for farm stay guests to hang out at the end of their long day mucking out my chicken house and milking my cow. (Nobody is ever going to come, are they?)

The floor downstairs is cement, by the way, and will be staying that way. This is a farm. I want farm stay guests (or workshop guests) to feel comfortable walking in from the mud without worrying about their boots. And workshops will involve things like making soap and candles, canning, etc, and I don’t want to worry about spills. I’ll do some area rugs, particularly in the bedrooms, but it’s just more practical to have an indestructible floor.

Now that I’ve fought my way through the worst of the clearing out and cleaning out, it’s paint job time! Most of the downstairs is covered in drywall and was primed at the time the house was built. This includes all the walls in the bedrooms and the bathroom/utility room, and one of the long walls in the large outer open space. The other long wall and the two shorter side walls are block. As in prison block! (Ugh.) I’m using antique white paint to brighten it up. I’m a big believer in the transforming power of paint. 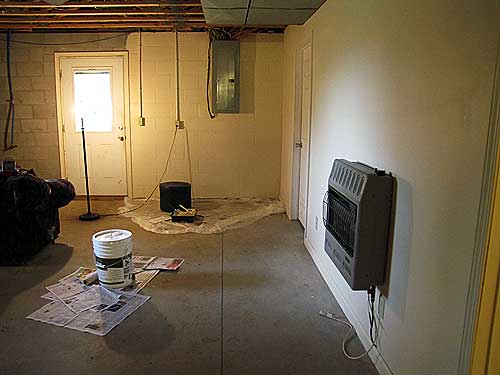 Where there’s primed drywall, the paint is covering in one coat. It’s taking three coats on the block. 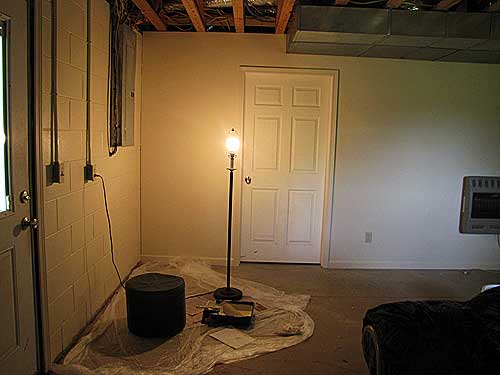 Yes, there are a number of electric and utility lines coming down the wall. It looks a tad industrial. I shall fix that, or at least distract from it, with cute furnishings and decor at a later point. However, in no way, shape, or form, will this ever be some frilly, frou-frou Victorian cottage scene. It can be, however, a vintage-style, practical, fun, and educational farmhouse-y space for farm stays and workshops. And it will be!

Painting block is slow going. And a little frustrating. Luckily, we have pretty “tight” block with small pores, so it’s not as bad as it could be. And what a difference it makes! It will take me several more days to finish the first half of the space. 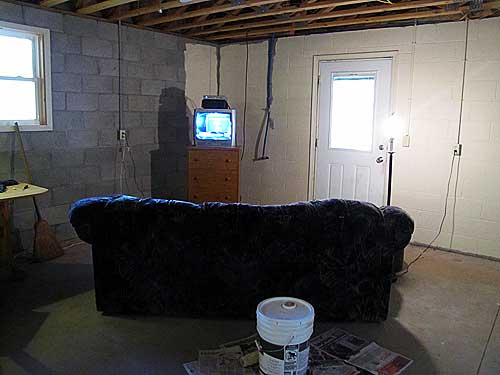 While I’m waiting for the brooder chicks to grow up and move to the chicken house, I’ll paint the bathroom/utility room then come back to finish that half of the space. Next up, finishing out trim and putting up a ceiling. We’ll see how far I get by Party on the Farm time. I’ll keep you posted! (And if you’re comin’, you can check up on me in person!)