We have half a dozen of these large spools. 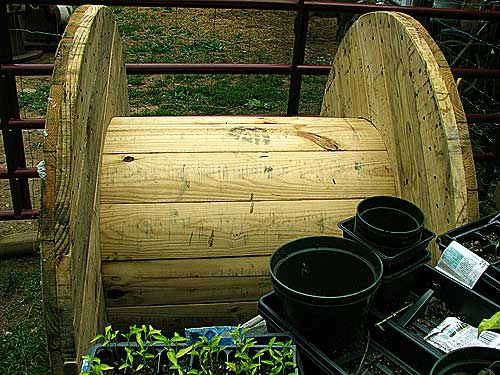 We use this one for a garden worktable. 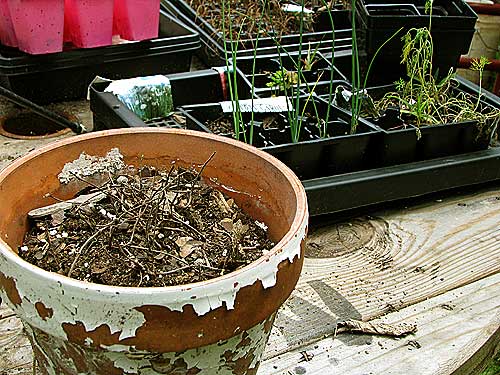 We have a couple of them down in the meadow bottom to set things on we need down there and another one out by the duck pond. Spools make great outdoor tables.

We use three of them–one large, one medium, and one small–in the goat yard as playground equipment. (A tip that was passed on to me–if you’re using spools for goats, cover up the holes on the top to prevent possible injury. They might catch their hoof in a hole.) 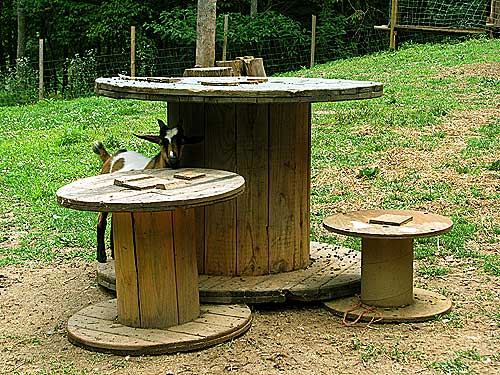 The medium spools also make a good height for chairs at a large spool table, and are handy as little side tables on the porch.

On the side of the house where the chicken yard is located, we have a firepit. We have one of the large spools out there. 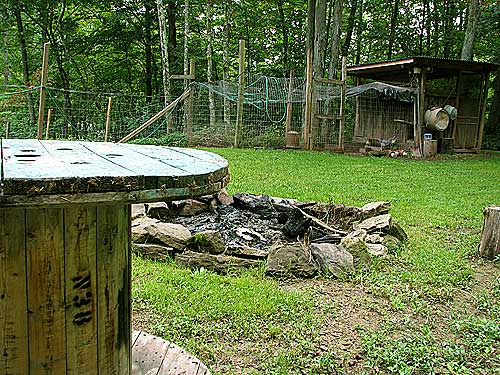 I got a hankering to pretty it up this weekend. I like things to be cute. I’m not much of an artist, though, so I got out my usual source of inspiration. My nail art books. I have several nail art books that are handy when I can’t think how to paint something simple like a flower. I have no sense when it comes to painting. If I wanted to paint a straight line, I’d probably get out a nail art book to show me how. 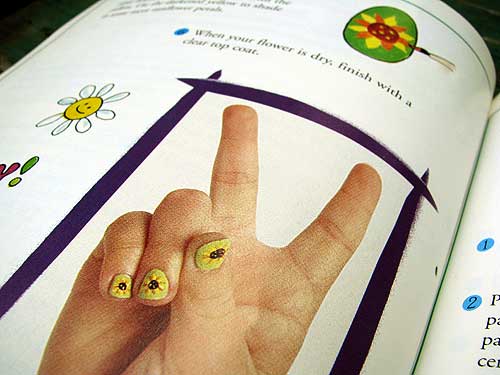 I chose a sunflower design because this spool already had a green background. (Sometimes they come with green tops. I have no idea why.) This area is a nice place to sit and watch the chickens in the pen and the animals in the goat yard. The kids roast marshmallows in the firepit sometimes, and in the winter, it’s a nice place to hang around outdoors and enjoy the view by the heat of a fire. (We have plenty of free wood.) I can fit six of the medium-size spools around the large spool table for chairs.

What’s-his-face likes to watch me. See him? 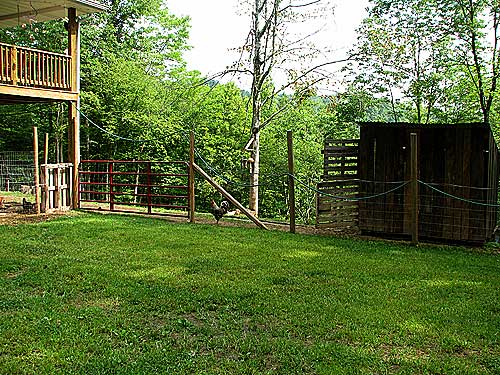 He watched me the entire time I was painting the table yesterday. 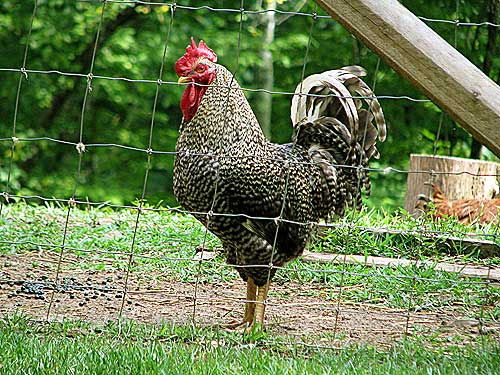 The other animals came and went along the fenceline. But not Mean Rooster. He glued himself to the spot and stared. He’s obsessed with me! He’s creepy. 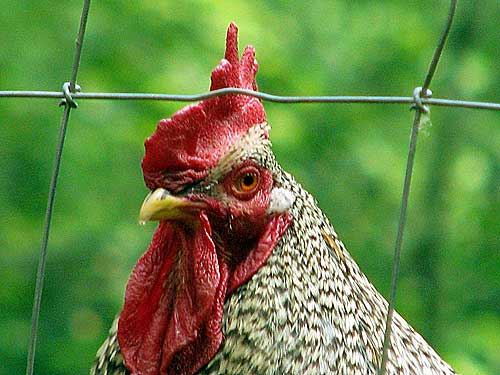 I feigned boldness. Stay back, Mean Rooster. Don’t make me hurt you.

Meanwhile, I kept my broom with me and had my escape route planned out in case he decided to come after me. 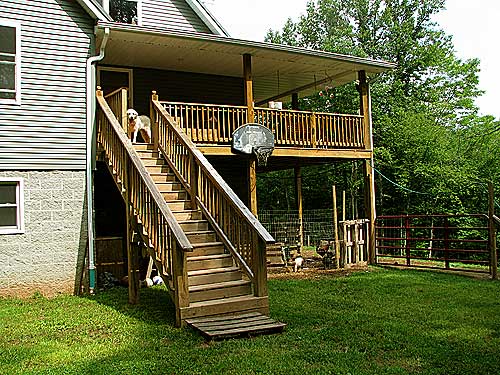 Then I got to painting. I brushed off the top of the table really well with the broom then made an outline of the flower petals (with paint). 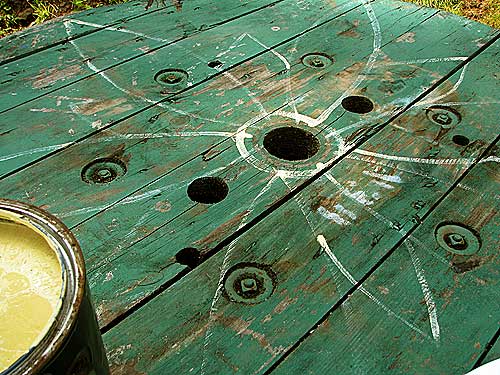 I used a small brush to fill in the petals because it was from my craft supplies and I was too lazy to look for something bigger. 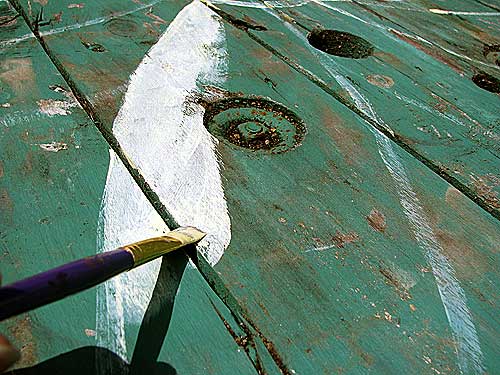 The green paint was very weathered, which is a look I like, and I didn’t want a really full coverage with what I was painting, so I painted pretty lightly. 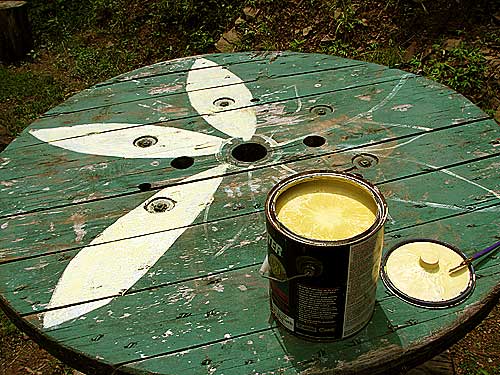 I wanted the end result to look as if the paint I had used to make the flower had been there as long as the green background paint.

Guess who was still watching me? 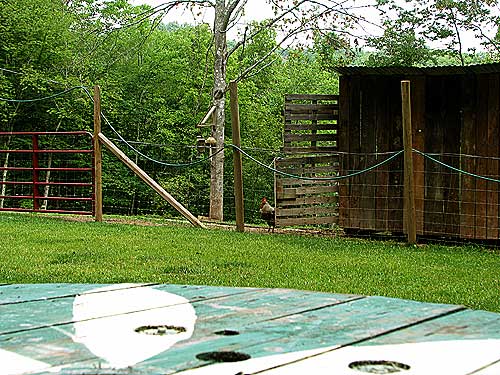 I used a light yellow for the main petals and an orange-gold for the smaller ones. I painted the center of the flower a dark red. 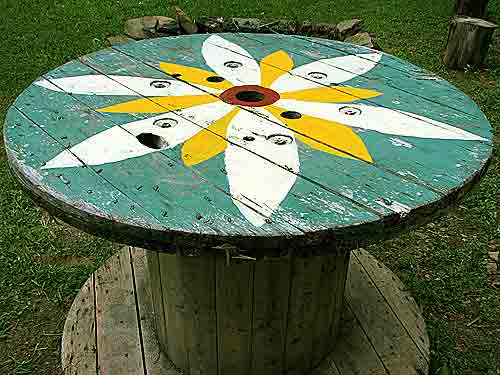 And now we have a pretty outdoor table by the firepit–which cost NOTHING.

Other than some small risk to my life and limb, of course. 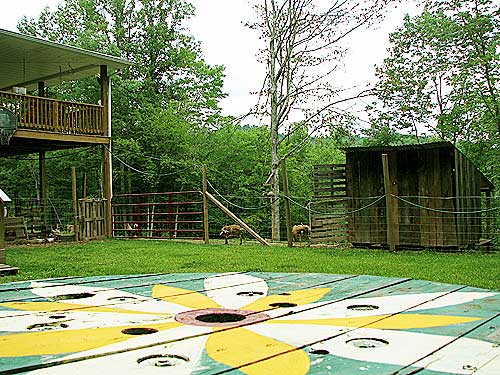 Because you KNOW he watched me the ENTIRE TIME.

P.S. Want spool tables? Look up electrical suppliers in your local phonebook. Call ’em up and see if they have spools to give away. Sometimes they will, sometimes they won’t, good luck!