Of course, what I’m talking about is not really a ladybug. Not even this kind of ladybug. 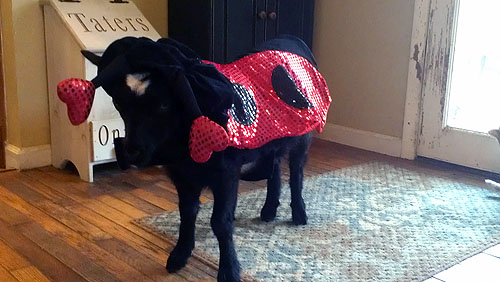 It’s this kind of ladybug: 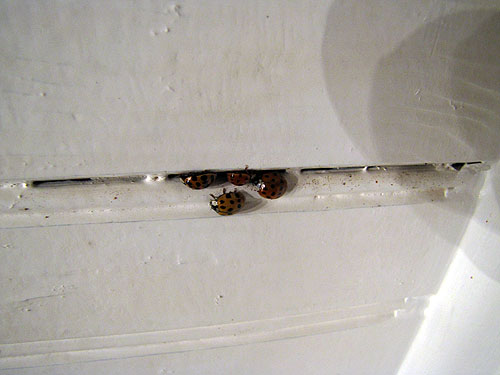 They are the plague, easily recognizable because they aren’t the rich red of our friendly ladybug. You know, the one who flies home because her house is on fire and her children are alone.

This is the bad kind of ladybug, that isn’t a real ladybug at all. It’s certainly no lady. Though it is a bug.

I dug up this old photo of the plague on the windows of the Slanted Little House. They love old houses, and white houses. Who are they? In case you don’t know–

Several years back, the government brought in an Asian cousin of the ladybug to combat the aphids that plague pecan trees, soybeans and corn. Unfortunately, while that worked, these foreign ladybugs had no natural predators and states like Kentucky, Ohio and West Virginia have become plagued by them. They come indoors for winter and they are attracted to light-colored buildings.

Some years are worse than other years. A few days ago when I had a repairman crawling under my house, they were flying around my head and getting caught in my hair. One time last week when I was in Ohio, I felt something in my pants. I reached all the way down my pants to almost my knee and pulled out, you guessed it, an Asian ladybug. IN MY PANTS.

This is looking to be a bad year for them here. You?