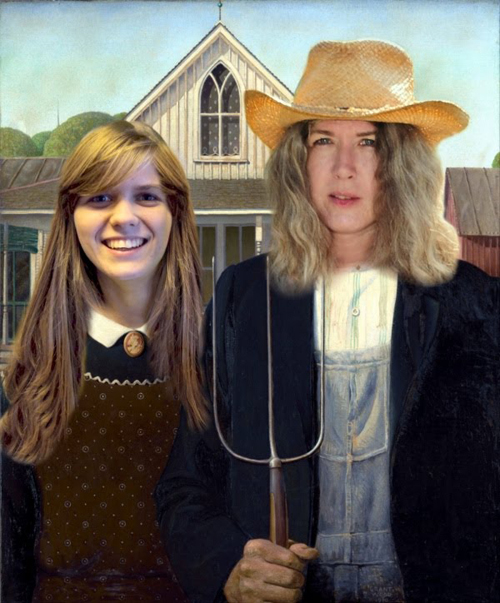 My friend Jerry put this photo together several months ago and I posted it. People asked if that was my gnarled hand and suggested I needed lotion! That is not my hand! And I haven’t cut my hair either. That is Morgan and I planted inside the image, by Jerry, who has a sense of humor. It seemed to suit this post, so I’m running it again, though I don’t think the gleam in my eye is quite tough enough. And Morgan looks way too chipper.

I’ve never been a super crafty person. There’s a lot of artistic talent in my family, but that gene skipped over me. Call me accomplished at stick figures. However, much of what I’ve pursued learning, and have written about here, falls under the umbrella of what we consider today to be artistic crafts. Soapmaking, candlemaking, spinning, even preserving. We can easily buy soap, candles, clothes, and food at the store–we don’t have to make them. Once something is no longer a necessity, it becomes a craft. But the real reason I pursued those endeavors wasn’t as a necessity or an art.

Years ago, I wrote a piece called The Keeper of the Bread. In it, I say:

This connection to the past through a given activity is not just true of bread or other baking and cooking but also of crafts like making soap, which is why I was more attracted to the hot process method of soapmaking. It was closer to what our great-grandmas would have done in a big pot over a fire. There are a lot of amazing soapmakers out there making soap into pieces of cake and so on, which are gorgeous, but that’s never appealed to me because the art of soapmaking wasn’t what I was after. I was after the ability to touch the past in some way through experience. I can’t actually touch or speak to those pioneer women who made soap by necessity, but I can do what they did, feel what they felt, to some degree, by following the most old-fashioned methods possible in recreating what to them was a chore not a craft.

And in the end, what I was looking for through that connection wasn’t soap or bread or candles, but that sense of strength I see in those pioneer women. They are, today, but faded black and white in rare photos, standing straight, grim, formal in poses on their farmhouse porches. They started their days milking a cow and getting biscuits in the oven. The remaining hours of daylight were spent sweeping and cooking and preserving, chasing younguns, and tackling whatever task was pressing down upon them whether it was making lard from their freshly-butchered hog or making more soap so the younguns would get clean. By nightfall, they were packing their ten or twelve kids into two or three beds and hitting their feather sack for some rest before starting all over again in the morning. These were dedicated women who got things done. They worked just as hard as the men plowing the fields, maybe harder.

From my comfortable suburban view, I felt lazy and purposeless in comparison. I came to the country looking for hard work. (The country is a good place to find it.) In exhausting myself through milking a cow, carrying wood up to the stove, canning, baking, and making my own candles, soap, lard, and so on, I was trying to touch their strength, draw from it. It wasn’t physical strength I wanted to find–it was their spiritual, emotional, intangible strength.

I looked for it everywhere, in every pursuit, and eventually I found it where it had been waiting all along, inside myself.

The crafts and cooking and canning and milking were just vehicles that circled back to me. Of course, I couldn’t see that in the beginning. I needed the process of the pursuit.

In today’s modern world, it’s almost as if we will do anything to avoid hard work. We celebrate innovation that eliminates labor. Time- and work-saving inventions aren’t by definition bad, but they do rob us of a certain integrity to our backbones. The lessons of hard work can’t be replicated any other way but by hard work. There’s grit and stubborn determination and persistence, and most of all, self-reliance to be found in pushing yourself to your limits and beyond.

There are a lot of benefits to convenience, too, and I’d be disingenuous if I claimed I never fall back on it. But when I take advantage of it now, I also carry like a secret whisper inside, I can do it myself. And that’s the power behind hard work of any kind, the confidence and awareness of your own strength and knowledge, the tough gleam in your own eyes just like that of the straight-backed women in those faded photographs.

It’s worth every drop of sweat along the way.