In the past week or so, I’ve made a whole bunch of soap. I played with some new fragrances and some natural pigments I wanted to try. It was fun–but I’m so over soap at the moment. (Next up: homemade body sprays. I’m on a quest to put together gifts of matching scented candles, soaps, and body sprays. Before you ask, I got the fragrance oils and pigments from Wellington Fragrance. You can see the pigments I’m talking about here.)

First I made sage and chamomile soap to match the sage and chamomile candles I made. I used a bit of crumbled dried sage from my garden and some sage and chamomile fragrance oil. The look I was going for was part natural-colored soap and part pale green. I put part of the soap into the soap mold then put a small amount of soap in a bowl. I added the natural pigment to the small bow of soap and mixed it in. 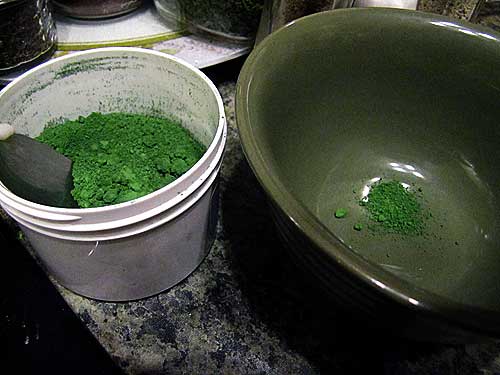 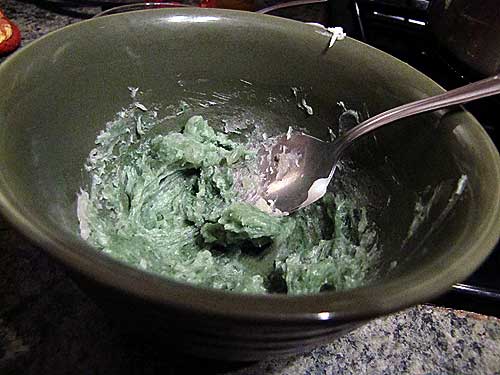 Then I put it back with the remaining soap in the pot and mixed it all together. 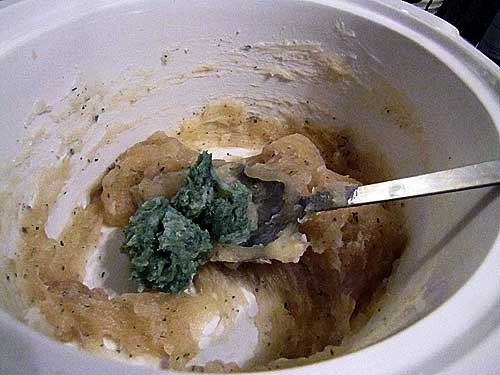 This was hard. The powder doesn’t mix very easily with cooked soap. Eventually I worked it in and put the colored soap on top of the natural soap in the mold. 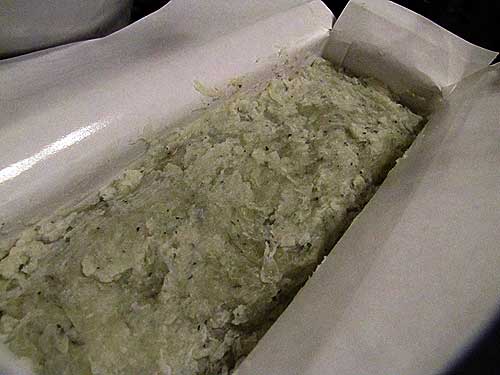 At first there was some distinction between the layers: 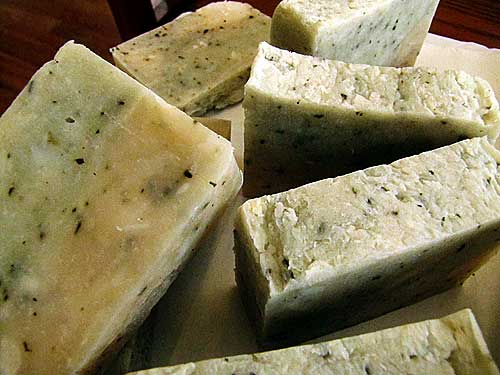 But within a few days, the organic coloring effect of the herb took over and it now all looks pretty much pale green. 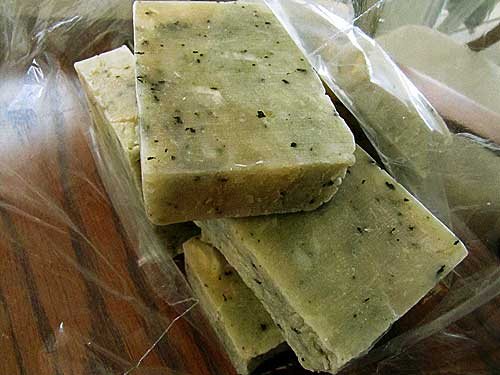 Still, it came out pretty, so that was okay, just not exactly what I had envisioned.

Second, I made some “apple swirl” soap. This time around, I mixed some red powdered pigment with some extra fragrance oil to dissolve the powder in something else before adding it to the soap. 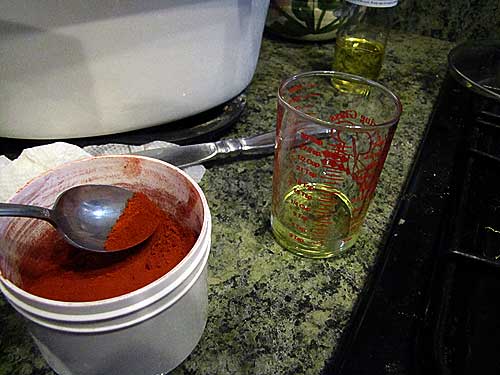 I added the rest of the fragrance oil to the cooked soap then again put a small amount of soap in a bowl. I poured in the extra fragrance oil (about half an ounce) with the dissolved pigment into the bowl of soap, mixed it in, then added it back to the pot. 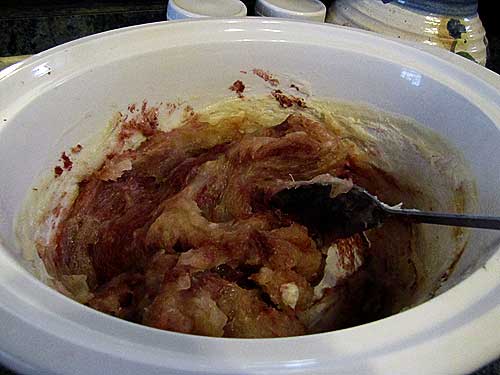 I didn’t mix it in thoroughly because I wanted a swirled effect, so I just stirred it around randomly then put all the soap in the mold. 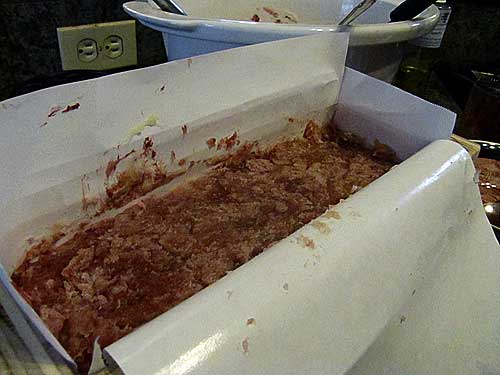 This came out okay. 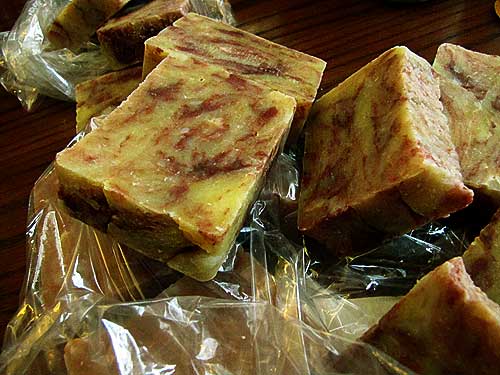 The soap isn’t all red, which I didn’t want. It has a random sort of swirled look. I thought I used too much of the pigment, though, and it wasn’t that easy to mix it with the fragrance oil. I used a lot of the apple-scented fragrance oil and this soap smells so good.

The next time, I made these sugared citrus-scented bars by dissolving a small amount of yellow pigment and red pigment together in about a tablespoon of olive oil. I warmed the olive oil in the microwave. After the soap cooked, I added the sugared citrus fragrance oil then stirred in the colored olive oil. I stirred the color in more than I had done with the apple soap, but not quite completely. I wanted the soap to be a light orange–but not perfect. 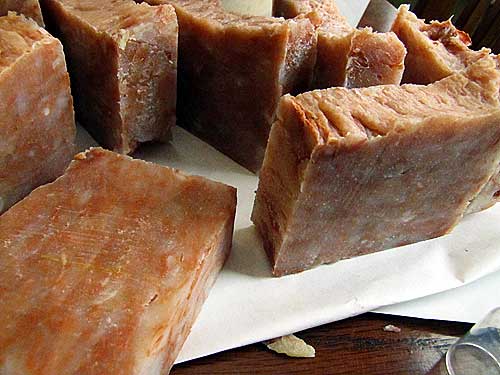 I was pretty happy with how this one came out. (And I thought the olive oil worked best for dissolving the powdered pigment.) 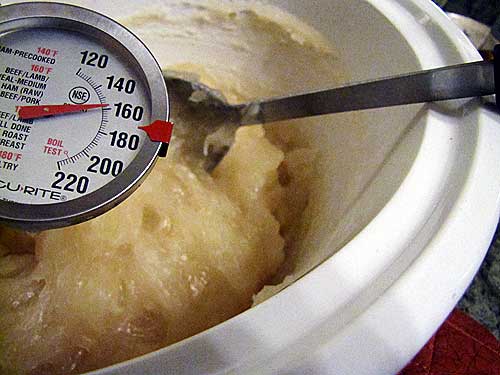 By the time I had finished all my gift soaps this week, I was a little tired of making soap for now, but I decided to make some soap just for me before I put all my soapmaking stuff away and moved on to the next project. I look at other people’s soaps and I’m always amazed at how beautiful they are. For the life of me, I can’t make pretty soap. I just don’t think it’s in me. That apple swirl soap is probably as pretty as I get. And after all my efforts in the past week or so to make the “pretty” soap that is simply beyond me, I was ready for something easy.

I made a plain milk soap, using milk from my cow, swirled with huge dollops of honey from a local farmer. That’s all. No pigments, no fragrances. I kinda wished afterward that I’d gone ahead and added a little fragrance, and maybe next time I will, but in the end, of all the soaps I’ve made in the past week or so, this is my favorite soap. 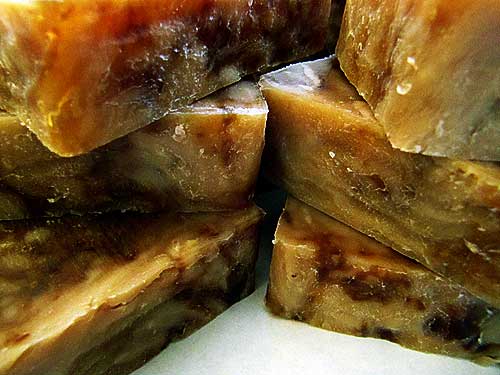