Let me re-introduce you to Mr. Funky Pumpkin. 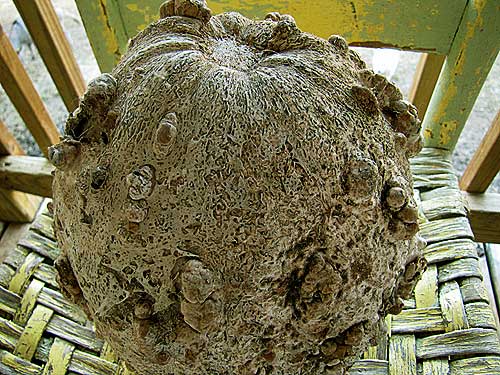 We first met Mr. Funky Pumpkin last fall when he had a brief relationship of unknown dimensions with the ill-fated Mr. Pear in one of my personal favorite posts ever, Pear Pressure. 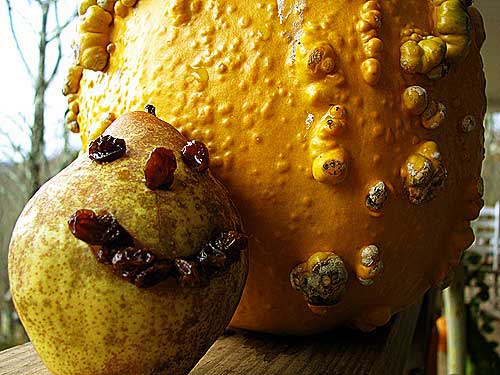 Back then, Mr. Funky Pumpkin was living large on the porch rail, waiting to be cut into on an exploratory mission to discover what could be inside such a bumpy and bizarre creation. Mr. Funky Pumpkin was a discard from the farmers market, part of our weekly pig feed haul, so we have no idea what the actual produce description would be, but he was too interesting to give to the pigs. I was eager to find out what was inside…..

Oh, yes, I intended to massacre him. And bake him up in a pie!

Only I was so busy with the motherlode of pears I was processing that I never did cut into him. And so Mr. Funky Pumpkin lived on! Or….something. This is how he looked by spring: 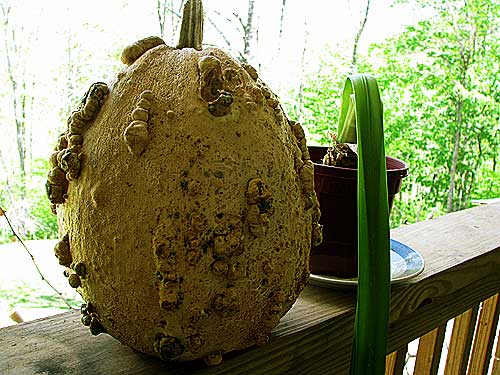 I thought I should get rid of him, but– I didn’t. And he sat for AN ENTIRE YEAR on the front porch rail, decaying. By some miracle, all through the winter and the spring and on through the summer and into the fall, through snows and rains and hard winds, not to mention cats, he was never knocked off the porch rail. He sat, stoic…..and slightly creepy.

I don’t know if it was neglect, laziness, or an odd attachment, but after his pie potential passed, I never disposed of him. I just….left him there.

And then before the party, as we were cleaning up the porch, I decided, hey, it’s TIME. Time to LET GO.

And then, oh then! That was when I made THE DISCOVERY.

I have, on several occasions, attempted to dry out gourds and other stuff, with no success. They always end up rotting. Or eaten by chickens. Or dogs. Or knocked down by cats. But as I picked up Mr. Funky Pumpkin to finally dispose of him, I realize he felt incredibly light. I knocked on his exterior shell. The sound was clear and light and hollow. Mr. Funky Pumpkin was completely, fantastically, perfectly DRIED OUT!

And I realized he was a wonderful craft project waiting to happen. Only….what? If you have ideas, I want to hear them! 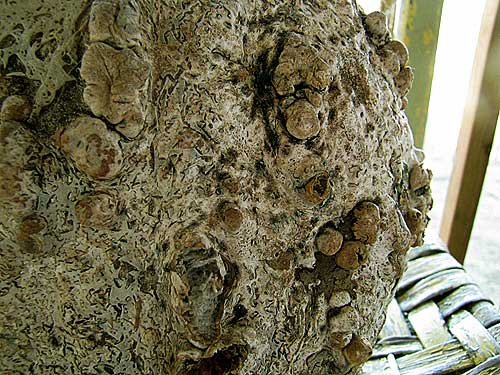 Because if you leave it to me….. 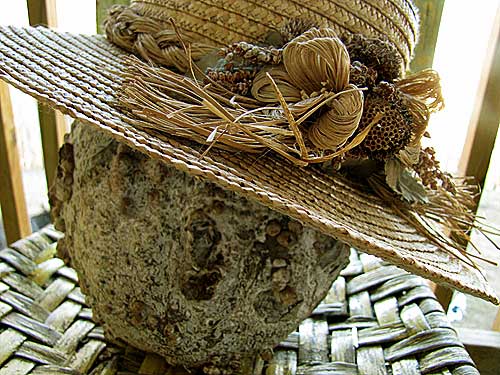