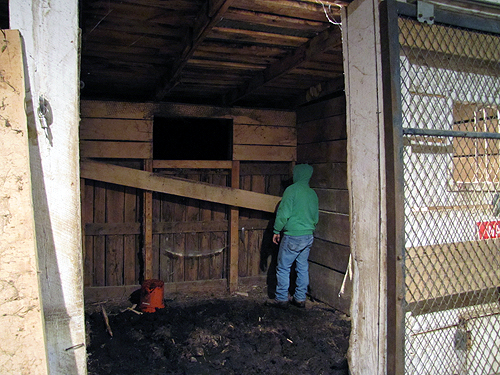 The stall addition to the side of the original part of the barn is getting a facelift. 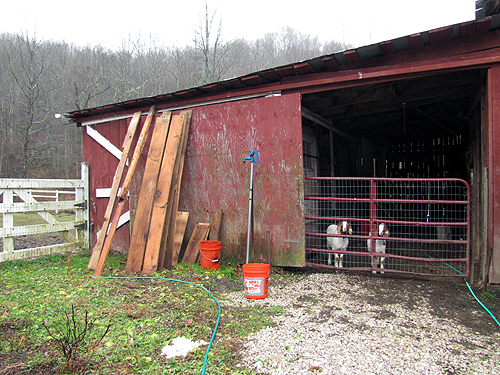 I’ve been a bit frustrated with the three stalls to the left of the alleyway ever since I moved in. Dampness has been a huge problem, which I’ve worked on in various ways–it has poor drainage and was built lower than the rest of the barn. Back in the 1890s when the original part of the barn was built, they were smarter than they were in the 1980s or so when the stall addition was made. The stalls haven’t been very useful for me. I’ve built shelters and other structures that take care of most of the animals elsewhere. I wanted to use this section of the barn for the cows, but it just wasn’t set up right. I discussed my needs with my hired men and we developed a plan.

This photo, below, is standing in the doorway of the alleyway into the barn. To the left are the three stalls. Stall 1 will be opened in the back with a gate, to be used as a stall if needed or for storage. The gate will keep the cows out of it. Stall 2 is where the cows will be able to enter the barn (but not get into the alleyway). From Stall 2, they will be able to access Stall 3 ONLY for feeding. Stall 3 will hold round bales. 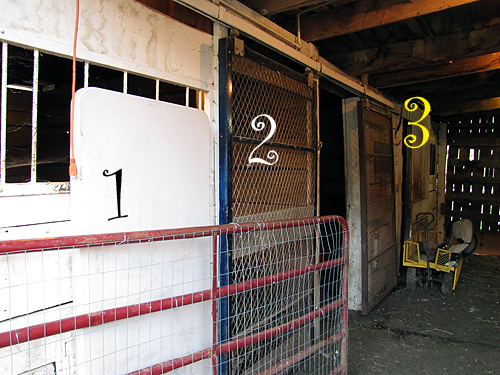 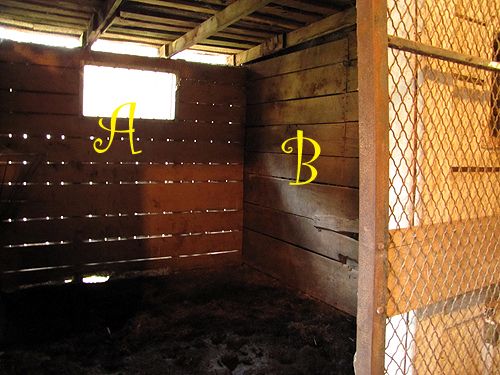 In this outside shot, you can see A, which is the outside of Stall 2, where the cutout was to be made. C is the cutout that will be made for round bales to be moved into Stall 3 with the tractor. 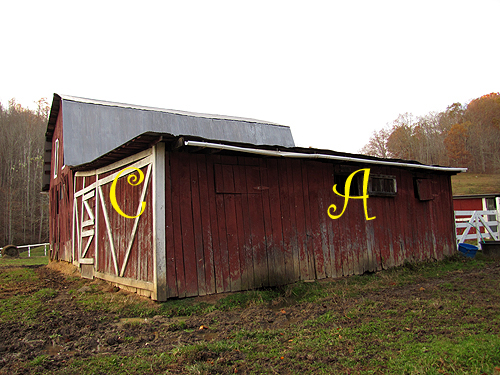 And if that was difficult to follow, now you can see it in action!

Here you can see how Stall 2 was opened for the cows to access for shelter and feeding. (Noted as Wall A above.) 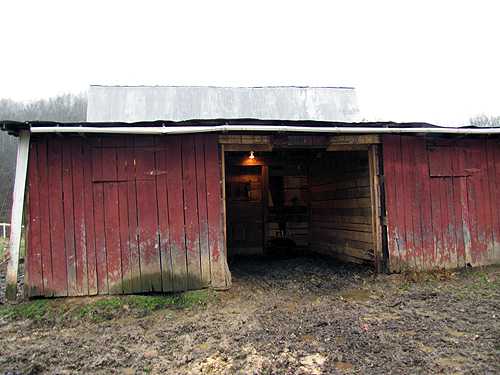 The cows can access the round bales from the partial openings in the wall between Stall 2 and Stall 3. 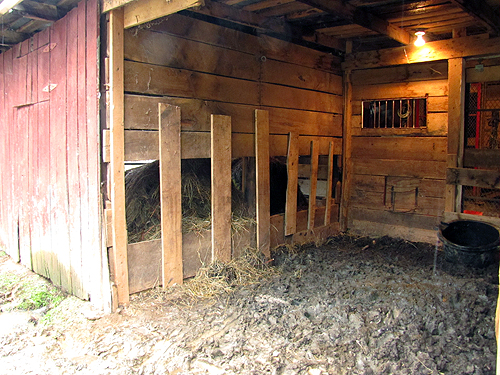 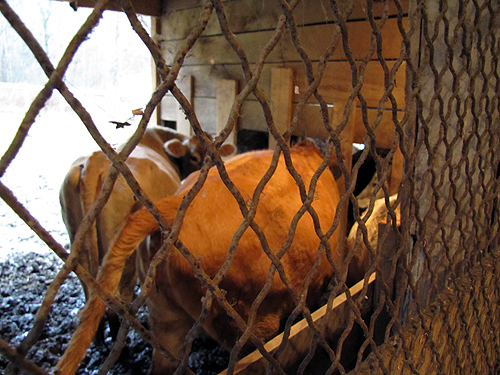 They can munch on the bales, but they can’t get to them to wallow around on them and be wasteful. 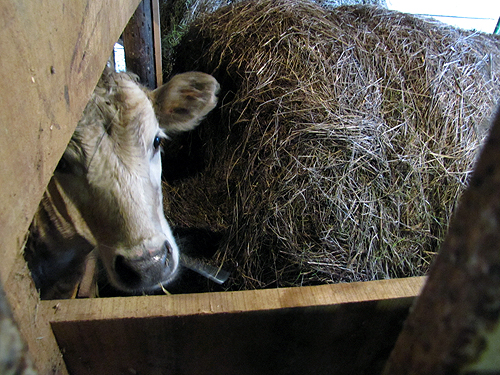 A gate protects the round bales from the opening at the back of the barn to Stall 3. 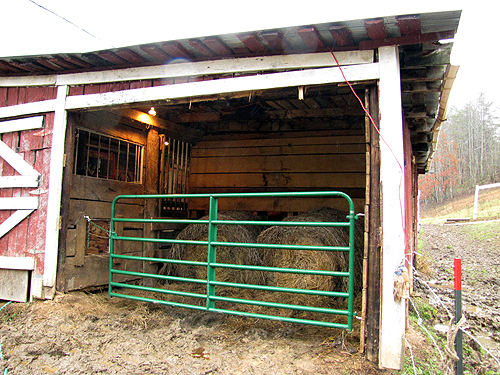 We all love this new arrangement! 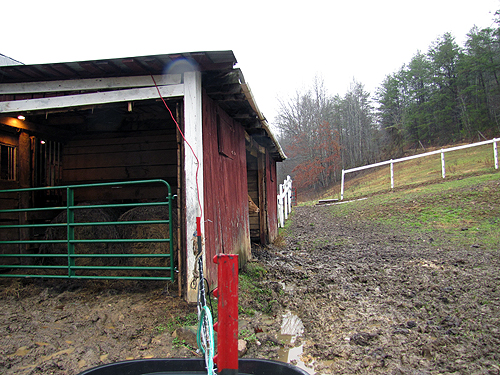 I also divided the back barnyard with a fence and a gate. 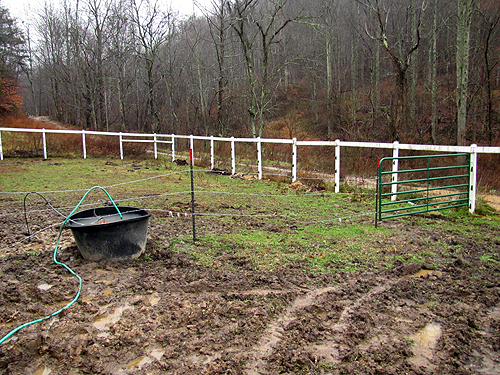 This gives me more options for separating the cows when I’m milking Glory Bee. There is an outdoor access stall on the other side of the barn where Glory Bee can be fed when she’s separated, leaving Dumplin and Moon Pie in the new divided area. 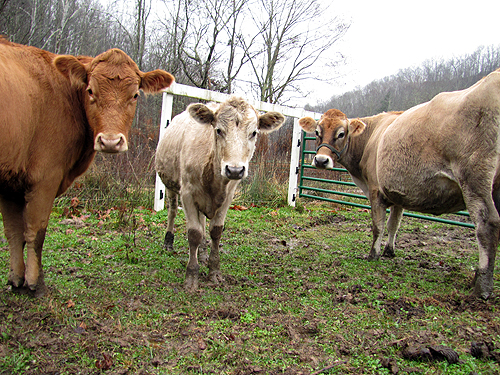 Not that anybody wants to be separated!!!!

P.S. Work on Stall 1 hasn’t been completed yet, so that’s not shown in the pictures.