Black walnut trees are native to West Virginia (and many other Midwest and east-central states), but we are particularly devoted around these parts. Exhibit A: The Black Walnut Festival, this weekend (and already in progress) in its 58th year in Spencer, West Virginia. 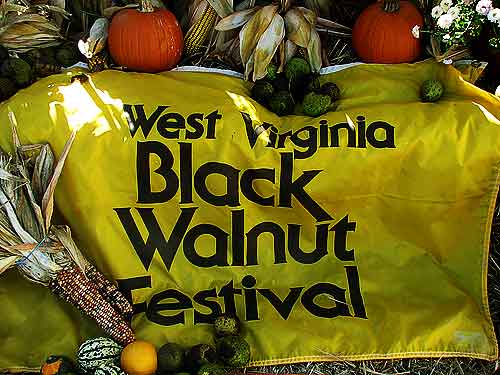 The trees are known for both their high quality wood and their nuts, but the nuts aren’t so commonly used these days, for a few reasons. Black walnuts are strong. Ask someone if they like black walnuts, and you’re likely to get a strong response–yes, or no. There’s usually not an I don’t care. Black walnuts call for an opinion. (Occasionally, there’s an I don’t know, but usually that’s from an outsider. If you live around here, you’ve tasted black walnuts.) A lot of people don’t like black walnuts. Today’s taste buds have been neutralized by chain grocery stores and box mixes. We expect everything to taste like cardboard.

Black walnuts are also expensive. (Quick example from Sam’s Club, one of the least expensive places to buy nuts: One pound black walnuts would run you $11.50 while one pound of “regular” walnuts is around $9. Walnuts in general aren’t cheap, and black walnuts are the priciest.) Black walnuts are free for the picking if you know where to find a tree–but they’re difficult and messy to shell. People today just don’t have the time or fortitude for it.

I’ve never attempted to harvest black walnuts before, though they have been available and around, for free, since I moved to West Virginia. I’ve never been a huge fan of cracking any kind of nut. I am, however, very interested in “making hay” from what is available on my farm. There’s something especially satisfying about eating what nature provides freely, and it feels wasteful in a way to ignore the bounty. But do I have the fortitude to process the nuts?

But I decided to find out!

I can’t be trusted to identify a tree unless it has something obvious falling off of it, therefore I can tell you that this is a black walnut tree. It has black walnuts still hanging from it, and there are black walnuts on the ground below it. Ha. That’s my kind of positive identification! 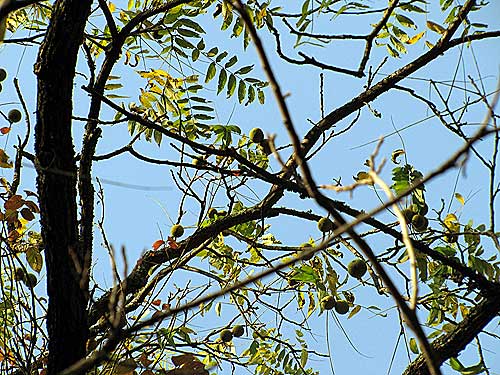 In fact, I have a number of black walnut trees, but two of them are really easy to get to over in my field across the road. I took a bucket over there for a look-see and to gather. 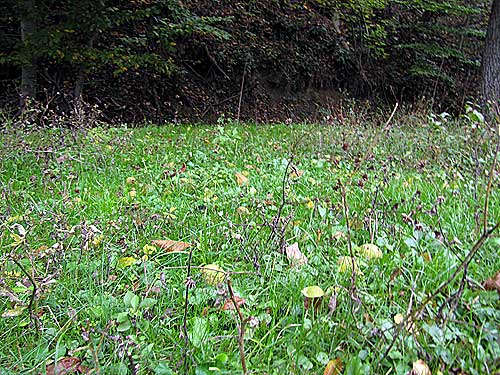 This was my first real “outdoor activity” this week, and I’m still kinda sick, so I didn’t feel too badly about limiting myself to one bucket. The bucket got heavy, so I left it at one point and started gathering in my t-shirt. 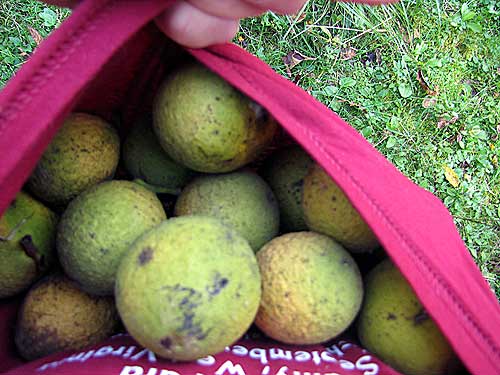 Eventually, of course, I still had to carry the whole bucket home. 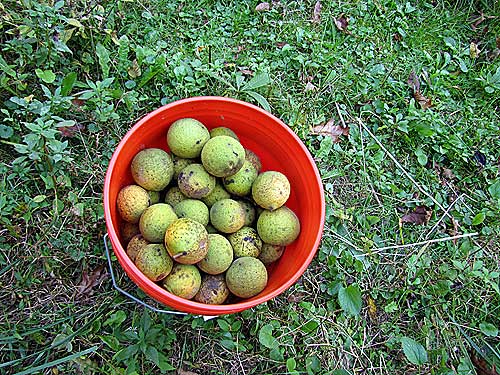 Black walnuts should be allowed to ripen on the tree. You can pick them up from the ground when they fall. The best ones are still green, with not too many dark spots.

The nuts shouldn’t be stored in the husks as this will ruin the flavor. Removing the husks is the (first) hard part, plus messy. There is an indelible dye in the husks that will stain your hands (and everything else). I’ve seen several suggestions for ways to break into the hull. I think the one I’m going to try involves hammering (and wearing gloves). This guy here seems to have a pretty good method using a hammer and a handy piece of metal used for hanging electrical conduit. After hulling, the nuts have to be washed, dried, cured, and cracked, so it’s a multi-step process.

I’ll report back after hulling as to whether or not the bucket will be going back for seconds!