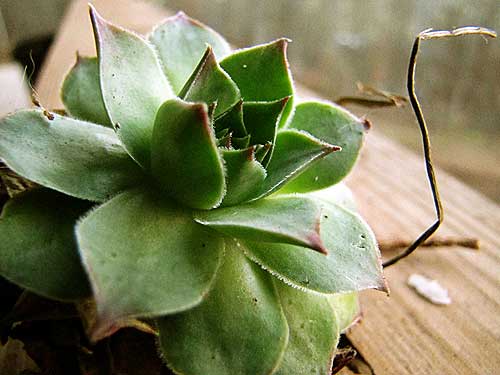 According to Wikipedia (which knows everything…. no?), hens and chicks are small succulents native to Europe and North Africa. Hunh. I thought they came from West Virginia because when I was a little girl, my parents got some hens and chicks in West Virginia and brought them back to our yard in Maryland. They were treated as if they were very special. I though they were cute, and they had a cute name, so somehow they stuck in my memory.

They grow close to the ground in a rosette, with a main one that then has “babies” –hence the hen and chicks common appellation. They come in different colors, apparently (according to Wikipedia), but I’ve only ever seen the common green one.

Anyway, hen and chicks are kind of sentimental to me because they remind me of my childhood, so it was a nice surprise when a lovely person brought me a bag full of hens and chicks at the Chickens in the Road party. I remember looking into the bag and being thrilled. I remember speaking with the person who gave them to me. And I don’t remember a thing else. The CITR party is a little overwhelming and fast-paced for me. At one point, my friend Missy (of Pete and Missy, who we got Clover from), arrived and I INTRODUCED MYSELF TO HER. I am not kidding. She was like, Suzanne, you totally know me. (Or something like that.) THAT is what the CITR party is like for me. I would probably introduce myself to my mother, I am that out of it.

So, if you gave me these hens and chicks, would you please say so, because I would like to thank you.

Further, and this is even more embarrassing than everything I’ve written herein so far, those hens and chicks sat in that bag from the day of the CITR party (first week of October) until YESTERDAY. At which point I was sure they were dead, but I am here to tell you what Wikipedia cannot, and that is that you can’t kill hens and chicks.

So we planted the shockingly still alive hens and chicks in a big old-fashioned wash tub full of dirt and by then it was dark so I didn’t take a picture. But that isn’t really the point. The point I want to make here is for those of you who think you kill every plant you touch, who think you have a black thumb, and maybe you are just like me and can imagine yourself leaving some plants someone gave you in a bag for nearly six weeks.

GET SOME HENS AND CHICKS!!