My woods aren’t rampy yet, but they shall be! I set off upon the trail that starts above the barn yard. This photo is taken looking back as I started up the trail. You can just barely see the white fencing of the barn yard. 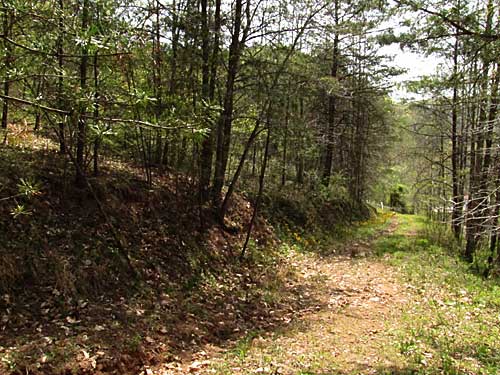 Looking down, you can see the goat yard and beyond–the house and studio. 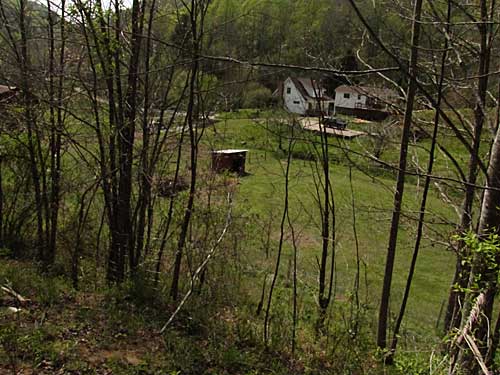 The first spring at Stringtown Rising, I wandered about our 40 acres with a plastic bag looking for ramps. For those of you not in the know, ramps (Alliium tricoccum) or wild leeks are the odiferous springtime treasures of Appalachia. (I do believe they are found–and can be grown–other places, but they are most well known here.) The white parts can be used in cooking similar to a strong onion or garlic, and the leafy greens are just as edible. The white bulbous end is the most stinkily delicious part, of course. Ramps can be found in patches on hillsides and near streams in shady, forested areas. The best time to find them is usually around mid-April, but based on the early appearance of out-of-the-trunk ramp sellers along roadsides, our pre-emptive warm weather pushed that date up a bit this season.

This is what ramps look like when you find them in the wild: 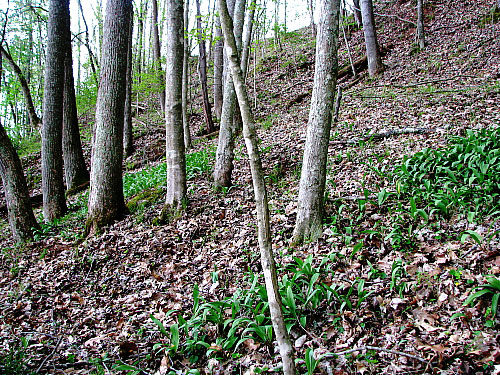 If you’re still not sure, dig them up and the smell will hit you right away.

There are a couple of ways to plant ramps. You can collect seeds after they bloom. (This is slightly more tedious than other methods, at least to me.) You can plant them whole, just imbedding the root in the soil, leaving the stem and leafy top above ground. (This is dead simple, though it wastes your entire ramp.) Or you can cut off the root end, reserving the remaining parts for culinary pleasure. 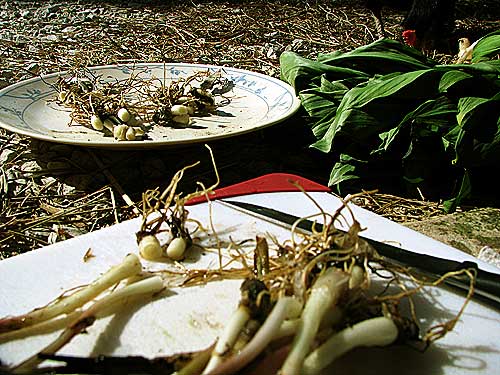 I like to do a little bit of both of these last two methods, because I’m really not sure which way works best. When I cut off the root ends, I do leave quite a bit of bulb, too. Probably more than necessary, but I’m into getting my ramps growing and I err on the side of caution.

Ramps are the center of springtime celebrations in West Virginia. Communities hold “ramp suppers” cooking up gigantic messes of ramps, often together with eggs and potatoes with pinto beans and cornbread on the side. This is your basic traditional ramp cooking, but ramps have gone gourmet in recent years and can be cooked up in all sorts of creative ways. If you love garlic, think “strong garlic” and go for it. The bulb, up to the white part of the stem, can be sliced, diced, mashed, etc, and added to dishes as you would garlic. Use the leafy greens as you would any greens. They can serve as the fresh greens in salads, or be diced up to add to soups and other dishes. Finely diced, the greens can be used somewhat as an herb. One of my favorite simple ways to use ramps is to dice up white parts and greens and sprinkle over pizza. Diced and mashed white parts can be used to make an easy “ramp butter” for grilled or toasted bread. The bulbs can be pickled to save for later. Ramps can also be frozen.

Most of my haul this year went into planting. This is my fifth year planting ramps. I started planting ramps the first year we lived at Stringtown Rising. I never did find any ramps that spring when I went out walking with my bag, but a neighbor took me to his farm and showed me the hillside of ramps he’d planted. I started planting my own, and planted more every year. It could feel a little defeating to start over at Sassafras Farm, after four years of establishing a ramp garden at Stringtown Rising, but hey, it just makes me a smarter ramp planter, right?

In my fifth year of planting ramps, here are my pseudo-expert tips. 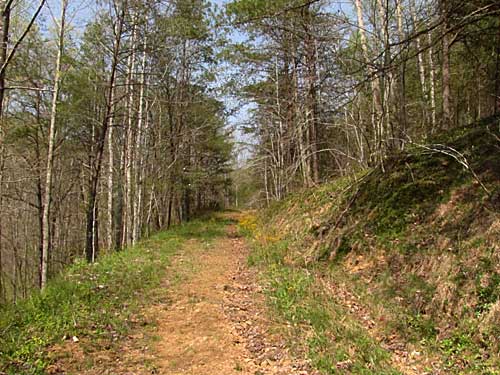 Here I am on the trail above the pastures at Sassafras Farm. Note that to the left, the ground drops off steeply here and to the right, it goes up a bank. Imagine a similar bank, only steeper, at Stringtown Rising, and that is where I planted my ramp garden. It was a perfectly good location by other ramp standards, and it was close to the house (which is why I picked it), but every year, I had to clamber up the steep bank to check on my ramps. Lesson learned. If you have to, go a bit farther afield until you find a good location that does NOT include any bank-clambering. You’ll thank yourself later.

Aside from a convenient location from the human standpoint, ramps want shade amidst the hardwoods and they need rich, dark soil. A moist area is good, too. They like to live near streams, but short of a stream, near a spring will work, too.

I moved along the trail, looking for a good spot. 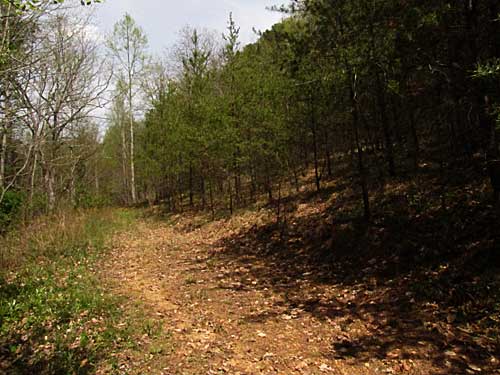 As the trail continues, the ground levels out on either side.

There are a number of springs all over this farm, and standing water where there should not be standing water is usually a good indication that you’re near one. As I looked down into the woods below, it was relatively flat (or at least an easy slope) and there was something of a natural trail. 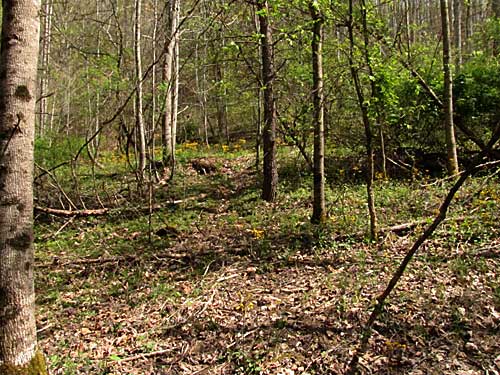 There was lovely shade and hardwoods. I set up shop. 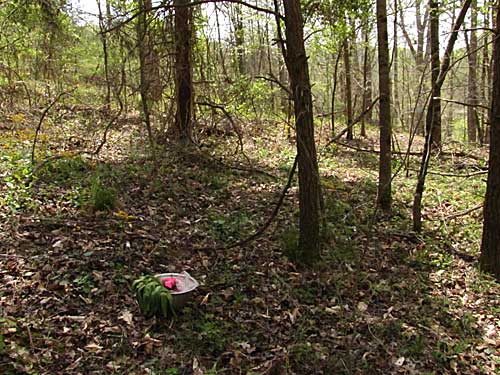 I brought with me a bowl with a few inches of water in the bottom–enough to keep the intact ramp bulbs moist, a bag of root ends in a bag (with a damp paper towel to keep them moist also), ribbon (for marking trees where I planted the ramps), scissors (for cutting the ribbon), and a small garden shovel. 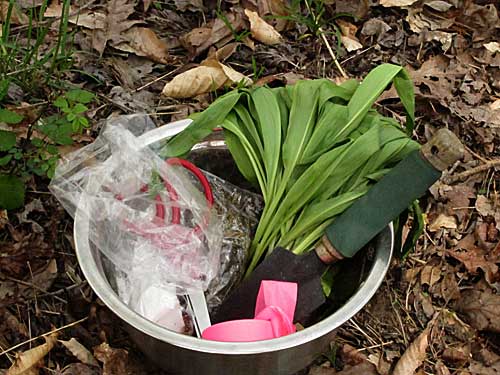 I tested the soil. 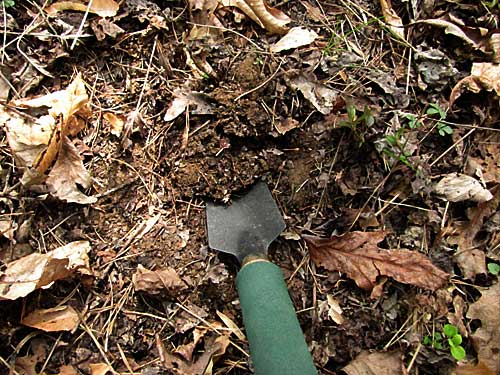 Dark and rich, with natural woodland composting. It turned over easily, soft and lovely. Not too much clay here. Perfect.

My bag of root ends: 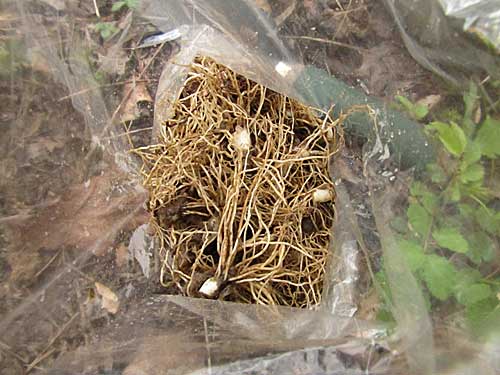 To plant root ends, just dig a hole large enough to fit them. I like to put two or three per hole. Plant them root ends down (more or less), cover them up, and tamp the soil lightly. 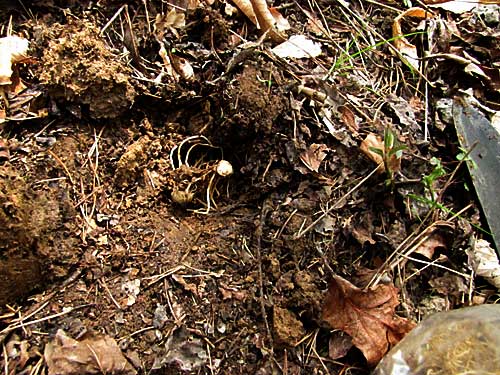 For intact ramps, plant them as if you were planting starts from a garden center. Just stick them in the soil, covering up the root ends, bulbs, and white part of the stem, and tamp the soil around them. I usually will put two in a hole. 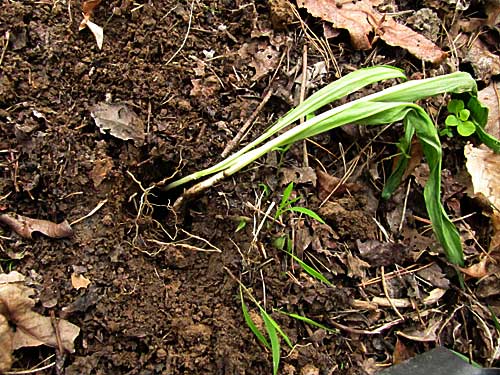 The reason I put more than one in a hole is because 1) I’m lazy (this means fewer holes), 2) in case one dies, and 3) ramps like to live together anyway.

By the way, if you get a bag of ramps and aren’t ready to plant them right away, you can preserve them for several days by placing them in a cool place. (The fridge works.) Wrap them in damp paper toweling to keep them moist until you’re ready to plant.

I chose four or five trees to plant the ramps around, testing the soil at each spot and assessing the shade. I planted several dozen ramps–some as root ends, some intact. It took about an hour. I just sat down at each spot and started digging. The most important thing I’ve learned about planting ramps is that they’re easy to grow. I worried and fussed over my ramp garden at Stringtown Rising, but those ramps came up every April like clockwork, so there was no need to worry. (I’ll probably fret over these a little bit anyway until I see them come up next spring.) On the other hand, the best thing about fretting over your ramps is that it’s all in your head. You don’t have to do anything with your ramps after you’ve planted them. Leave them alone. Visit them in a year. When you visit them the next year, bring some friends–as in, plant more ramps.

I also learned that a ramp garden doesn’t grow and spread as quickly as I expected. After four years of planting ramps each spring at Stringtown Rising, I would not yet have started harvesting. I thought that in five years, they would spread enough to harvest. Now I suspect it probably takes closer to ten years to establish a ramp garden that spreads enough to harvest without robbing your base. Remember, however, that you can just plant root ends, which means you can have your ramps and plant them, too, so no big deal. Keep planting, and eventually you’ll have enough ramps of your own to harvest without taking away from your foundation. The only way to speed up this process is to plant more at a time. I planted probably two or three times as much this year as I planted my first year at Stringtown Rising, and will keep doing it every spring, so we’ll see. I might have enough in five years if I keep it up at this rate. You shouldn’t harvest until you have big, glorious patches where you can harvest without taking away from the base from which next year’s patches will grow.

When I was finished planting, I tied ribbons on all the trees where I planted ramps. I also tied ribbon on the two trees to either side of the path down to my new ramp garden. 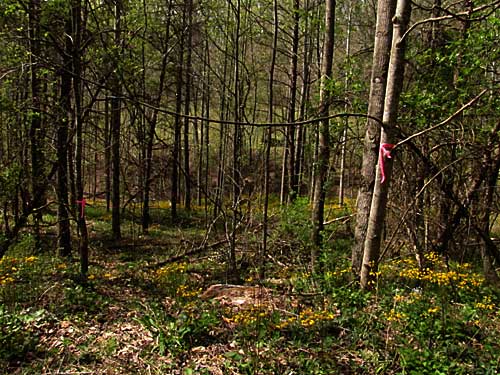 I’ll come up with a more permanent way to mark the ramps later, but for the time being, that will do. I didn’t mark my ramp garden at Stringtown Rising quite so well. I knew generally where they were, but once I clambered up the bank, I had to wander around to find which trees they were planted around, which was an added annoyance on top of the clambering.

The ramp sellers are still out there. Go get some ramps! They’re easy to grow, I promise.

P.S. No, I did not dig up any ramps from Stringtown Rising. I left them for posterity. My legacy. My place in the history books. I’m like Johnny Appleseed, only I’m spreading ramps across Roane County (which is not a highly rampy county for WV) instead of apple trees across the land. I’m….Suzanney Ramproot! That’s it! Yes! I’m like…. A West Virginia LEGEND!

Signed (with stinky fingers),
the one
the only
Suzanney Ramproot