My parents had been visiting for two days already when they said, “Where is your garden?” 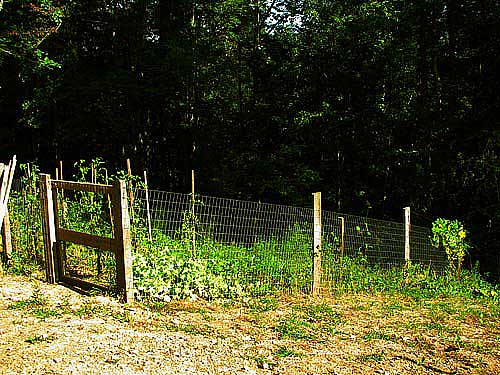 That’s why it’s my secret garden. It sounds so much more cool when I put it that way, doesn’t it?

We’ve had some struggles with our garden’s first year, foremost being time. Gardens love to have time spent on them. Between moving and unpacking, not to mention getting started with chickens and goats and a giant puppy, time to garden has been in short supply. The levelling of the land around our house during construction, resulting in the topsoil being scraped off, didn’t help much, either, nor did our lack of a tiller or tractor this spring. It’s completely overgrown.

But my garden has been amazingly forgiving. 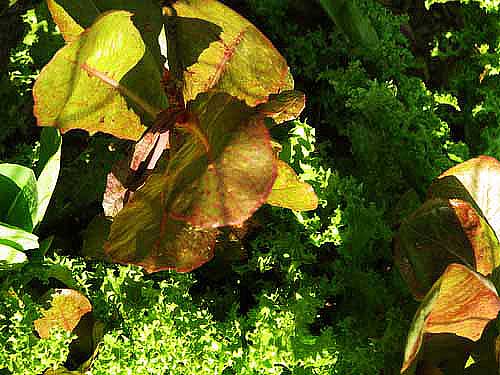 My lettuce just started bolting in the past week, but it’s provided countless salads.

We’ve got lots of little pumpkins and gourds promising me autumn decorations and pie. I think they whispered something about crisp, perfect weather and pintfuls of milk from Clover, too. 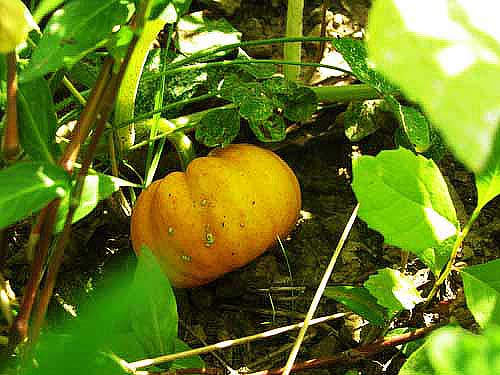 Zucchini and yellow squash have been producing in their heedless exuberance. I’ve never had a garden where I couldn’t grow too many zucchini and squash. I bet they could grow it on Mars. 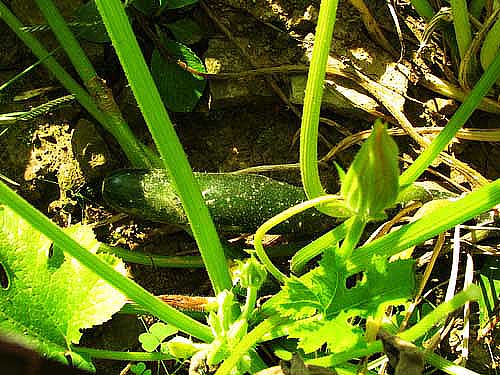 The garden has provided potfuls of green beans. 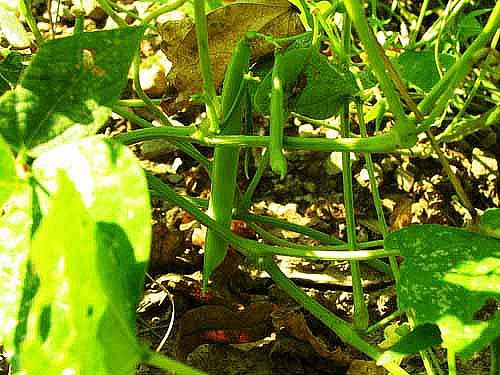 And tomatoes, cucumbers, peppers, and more. I’ve got jalapeno and banana peppers and big tomatoes in the garden, and cherry and roma in pots. My herbs this year are all potted, too.

I love this valiant tomato plant that sprang up by surprise outside the garden. It’s independent and determined. It doesn’t want to be lost in the crowd. When it gets a little bigger, it’s probably going to dye its hair purple and get tattoos. It’s going to be trouble, this one, I can tell. 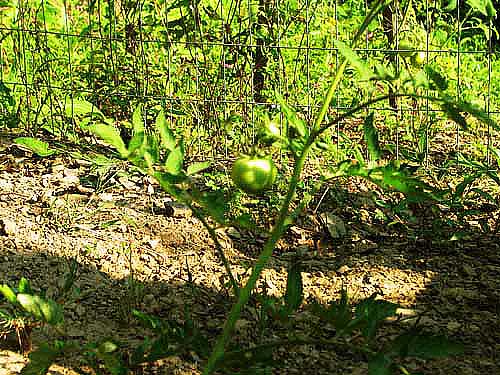 It’s soul-mate, this flower, also popped up outside the flower bed. 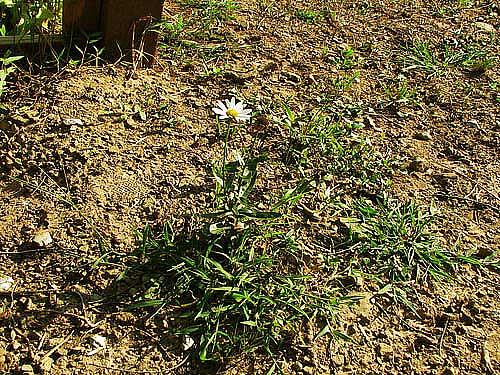 The big flower bed is full of blooms now. 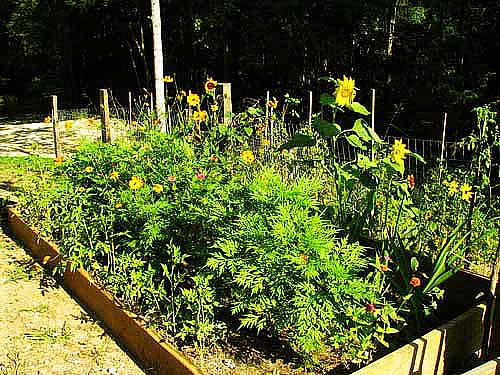 I love sunflowers. Can you look at a sunflower and not be happy? I don’t think so. I like to cut them to bring inside so I can be with them all the time like I’m their stalker. 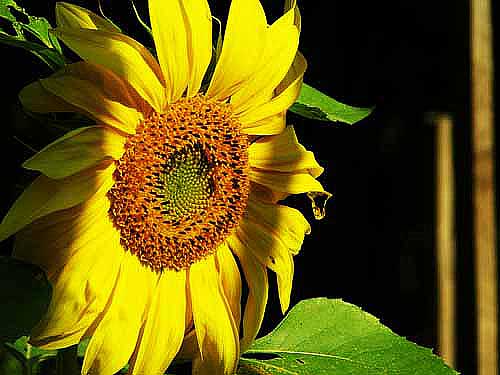 I’m growing cats in my garden, too. 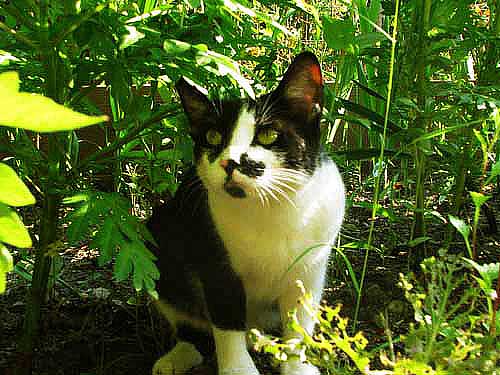 I have eight now, so I’m doing pretty good!

I even had visitors to my secret garden yesterday! Well, they didn’t exactly come to see the garden, and I’m not sure they recognized it as a garden until I pointed it out and they came closer to take a look. After, you know, they got done meeting and greeting Coco, Dookie, the chickens, and the goats.

Blog reader and sheep farmer Kathy and her partner, Mike-the chicken-whisperer (I’ll explain that in a minute) came to pick up boxes and boxes of books I’ve been trying to unload on some charitable-minded person who would dispose of them helpfully, and Kathy came to my rescue.

Coco told her thank you. And ate all the cookies I gave them to give to Clover. 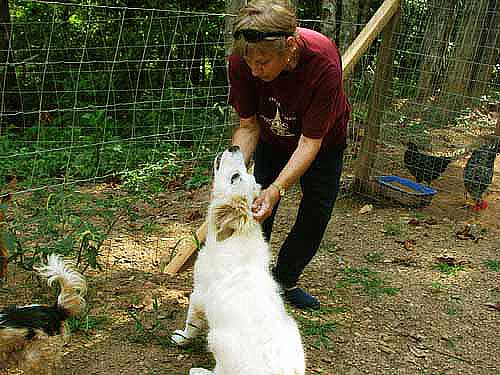 Mike went into the cihcken yard and handily picked up the banty hen and set her on his hand like she was a pet. 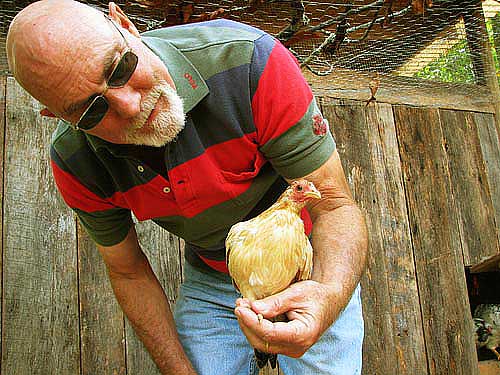 That banty hen won’t give me the time of day. Not that I’m bitter.

Kathy brought me some of her farm-fresh eggs and I gave them a fresh-baked loaf of Grandmother Bread. They ate pie on the pie porch and then Princess tried to kill Mike with a ball. They escaped with their lives. Aren’t they a cute pair? 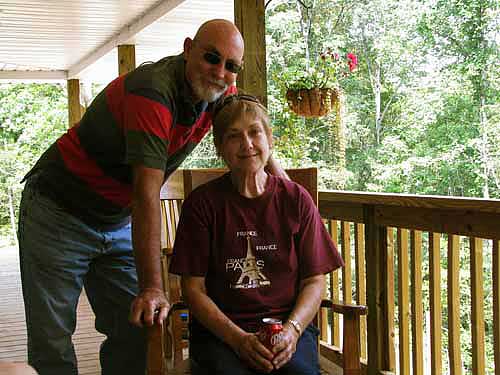 We had another group of visitors later in the afternoon. Not so welcome visitors, at least not near my secret garden. They looked around and said, “No garden here….” And off they went. 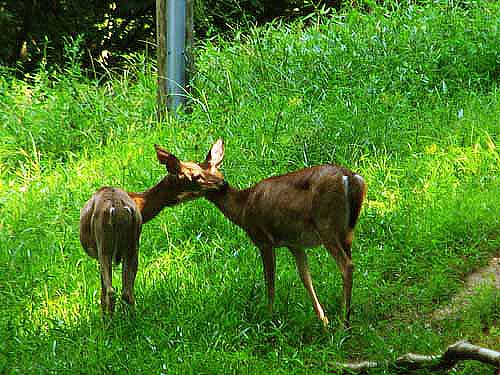