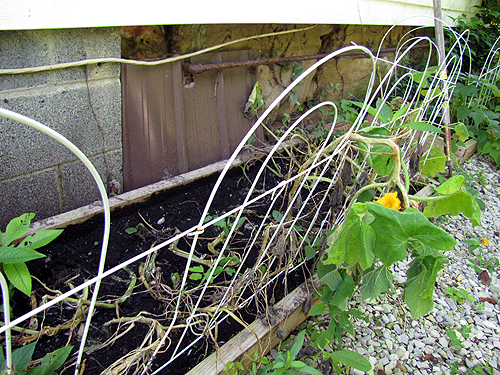 Yellow Squash, who was grown from seed, and who became the first vegetable in the garden to flower though his career was cut horribly short, passed away on July 22 in the studio garden as a result of a lack of pollination and flooding rains.

When he was only 2 months old, he began flowering wildly, competing against a field ripe with well-known vegetables and managed to place first in this endeavor. Later that same month, he won his first of many Garden Titles and his career leafed extraordinarily quickly. In his short time growing professionally, he became a spokesplant for unpollinated squash that gave him a direction in his life and, in his own words, inspired the young plant he grew up to be.

Yellow leaves behind his companion of three months, Green Zucchini, his growers, and many vegetable friends and weeds.

There will be a family-only viewing at the studio garden on Friday followed by a public viewing for friends and workshop attendees that will continue until the garden plot is cleared.

In remembrance of Yellow and in lieu of flowers, the family is accepting squash.