In keeping with my purging and decluttering theme inside the house, I got an itch to do the same thing outside. It needed it. And so yesterday we had a long and exhausting outdoor labor party. On the agenda were the areas around the house where clutter has collected, and in particular, the area under the front porch. The main living area of our house is on the second story. Our front yard is the goat yard. The fence of the goat yard runs right along the porch posts under the front porch, which stretches all the way along the front of the house (and the porch runs around both sides, too). 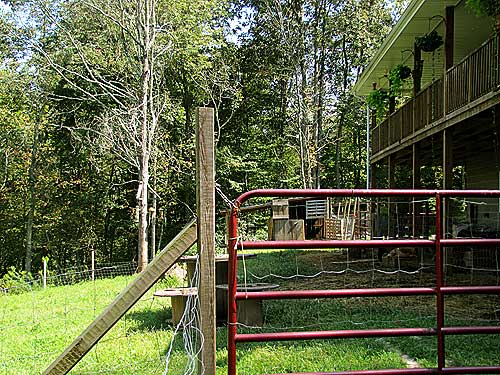 This area under the front porch is used as a staging area for taking care of the animals and other farm-related things. We keep the feed box there as well as various tools and supplies. It’s gradually grown out of control as the chickens moved in, making messes. During the winters, we’ve put straw down there at different times because of mud. The straw has piled up and was rotting. Things got lost under the straw. Trash was everywhere because I’d empty a feed bag and, due to the lack of an available trash can (which I did nothing to correct all this time), drop the empty bag on the ground by the feed box. Then the chickens would cart it away and tear it to pieces. Anything that belonged outside but didn’t have a proper place seemed to end up down there. It was getting to where I’d trip over things lost in the straw on my way to the feed box. To say things were bad down there would be an understatement.

We spent hours yesterday clearing the area out. Together with Weston and Morgan, I got the entire area unloaded onto the driveway where I divided things into piles to keep, to trash, or to store somewhere else. Every bit of straw was raked out and piled up to put on the garden later. 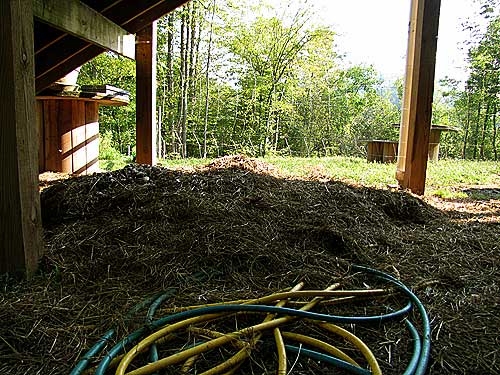 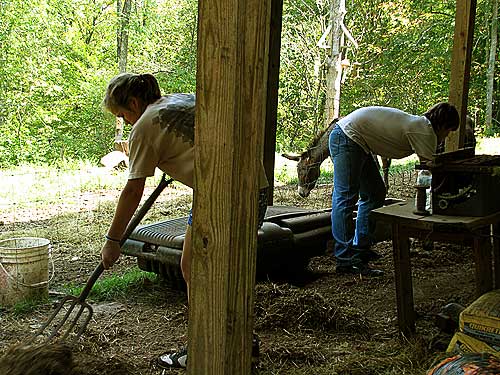 A huge trash pile was taken to the fire pit to be burned later. 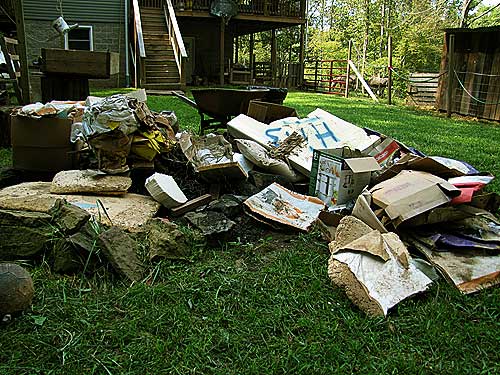 Other items that aren’t used very often were put away in a shed in the meadow bottom. The rest was put back, organized neatly and properly, under the porch. (And I got myself a trash can to keep down there, too.) The newly neat and tidy work area under the front porch: 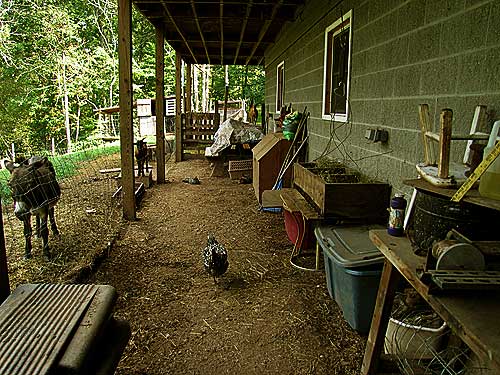 I’m as excited about getting this area cleaned up as I was about my sewing room. I make animal rounds every morning and every evening. This area sort of grew into its function over time, so it wasn’t set up to begin with to fulfill this purpose. It’s so much easier to keep an area organized if it’s set up properly for its purpose, and with realistic understanding of what goes on there. (Note the tarp covering the tools on the picnic table.) 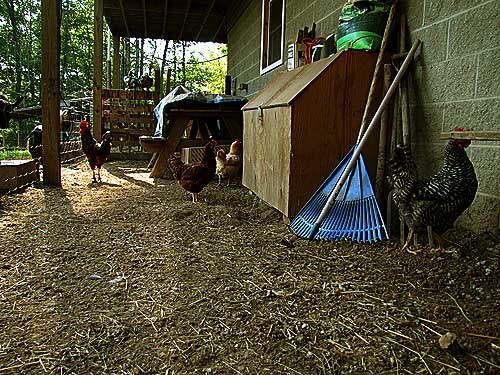 The chickens were pretty excited, too. Chickens love to dust their feathers in freshly-turned dirt. 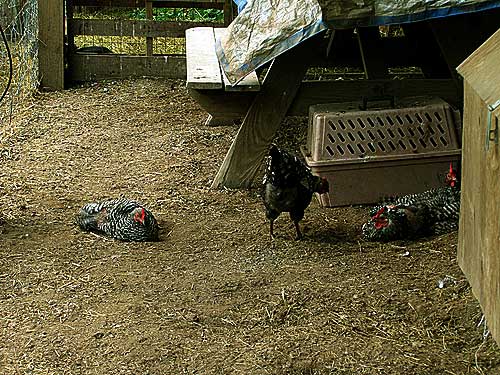 Hoping to stop them from laying eggs in corners and on top of bales of hay (which are stored around to the side of the porch), I set up these nesting boxes for them on a table (so the dogs can’t get to the eggs). 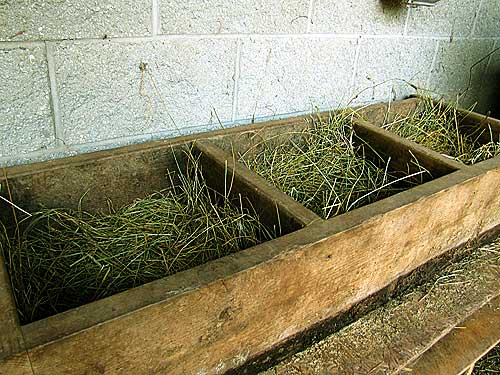 We’ll see how many days, weeks, or years it takes them to lay an egg in there. Chickens are so cooperative.

I know not everyone would want a goat yard in their front yard (and no, it doesn’t stink), but we enjoy it. I love to look over the porch rail onto the yard and watch them. 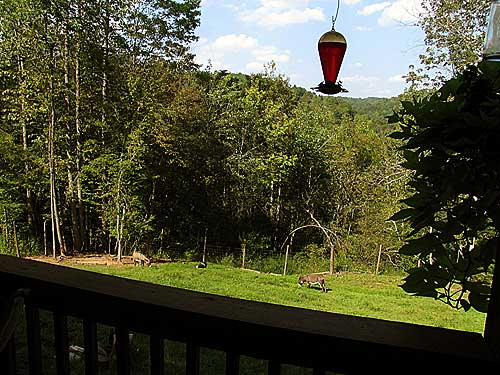 I love to just walk downstairs and pet them. They hang out along the fence, always excited to see me. 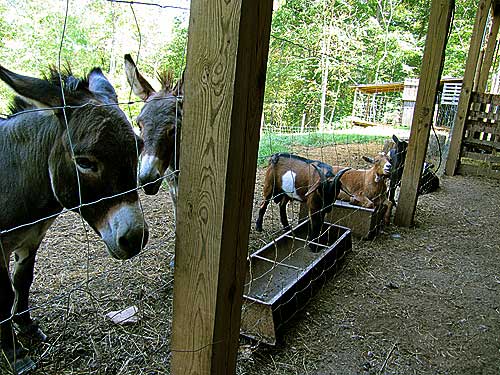 Clover, standing on top of the “dog house” in the goat pen, the better to keep an eye on my every move. 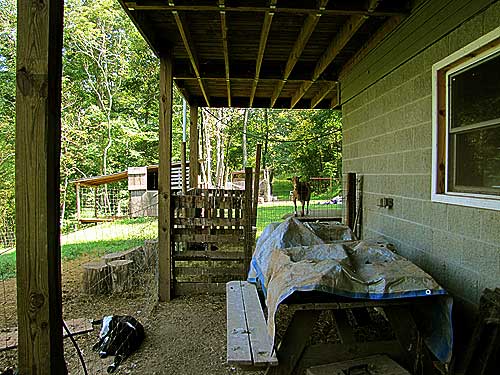 Getting this area straightened up and functional was exhausting, but worth it. The children thought it was the most fun party ever. Which is good, because we’re going to have another one in a couple weeks. 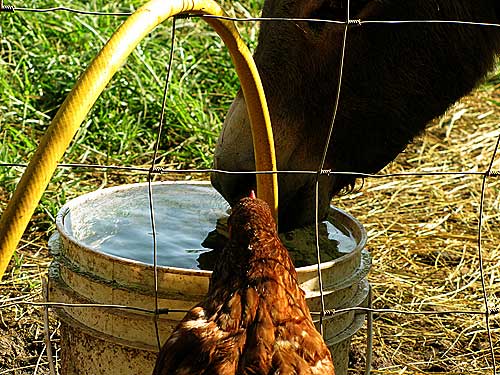 The chicken house needs cleaned out!