In the past week or so, Ross and I have planted 16 trees. I’ve never planted a tree before and neither has Ross, so we were pretty much the Keystone Cop tree planters. I ordered most of my trees from Stark Brothers. The trees came in big narrow boxes. I guess I was expecting something that looked like a tree.

The sugar maples came first. I planted them along the strip of grass between the two access roads. I studied the little tree planting guide that came with the trees for two hours while the trees soaked in buckets of water, realizing I didn’t have what you were supposed to have to plant trees. As in, some nice rich topsoil and peat moss, not to mention some mulch.

Oh, well, I was sure it would be okay. Only the soil there turned out to be some quite ugly clay. I went back to the house and got a bag of potting soil, which contained topsoil, peat moss, and fertilizer. I mixed that into the clay and we went ahead and planted the trees. Probably, I shouldn’t have put potting soil with fertilizer directly in the holes, so maybe I killed five sugar maples.

I told Ross he could explain to everyone in 40 years why they had no maple syrup. Or I’ll just get some more trees next year if these die. There is a one-time replacement policy, which is helpful if you’re stupid.

Before the next batch of trees arrived, I stocked up on topsoil, peat moss, and mulch.

I started soaking my sticks and studying the guide again. I was determined to become a super tree planter! 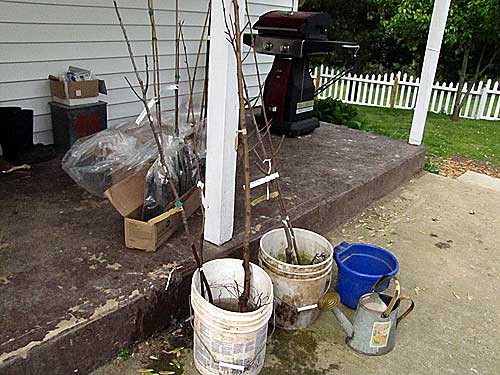 Some of the trees came in pots, and other were bare root, like the maples. 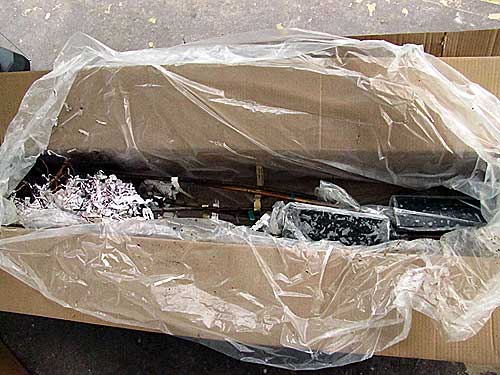 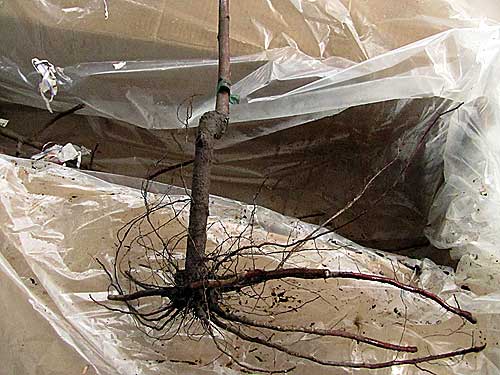 I’m sure I make all this tree planting sound more difficult than it has to be.

Ross dug the holes for me. He dug all the holes in about 30 minutes. He’s a powerhouse with a post hole digger, shovel, and spud bar (for breaking rocks). 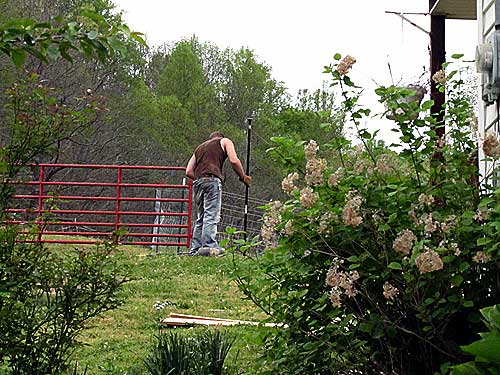 I meticulously mixed buckets of topsoil and peat moss. I studied the guide again. I fretted over the bud-unions. I sat on the ground, holding the “stick” in one hand, filling in topsoil with the other, tamping soil down, watering in the hole, adding more topsoil and peat moss, tamping, watering, and finally mulching, being careful to keep the mulch an inch away from the trunk and not to mulch too heavily. Or too lightly. 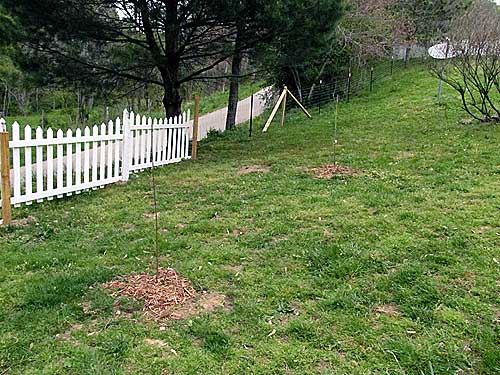 Then I’d move my little operation to the next hole. 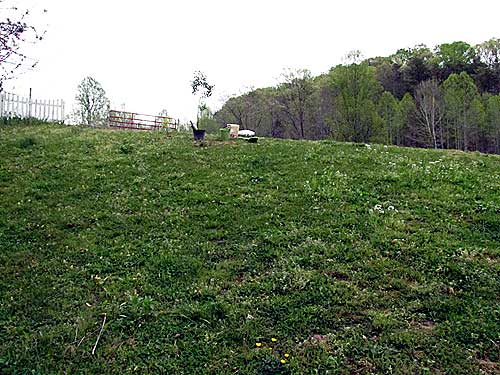 Several hours later, Ross came outside to check if I was ready for the next step in which he would be involved. (Driving the t-post and cutting the fence wire.) He said, “You’re not done yet? Are you taking 45 minutes to plant each tree?!”

I’m sure that was an exaggeration!

By evening, we were on task with the t-posts and fence wire. Each tree was wrapped and secured. And re-mulched because the chickens dug up the mulch under nearly every tree. 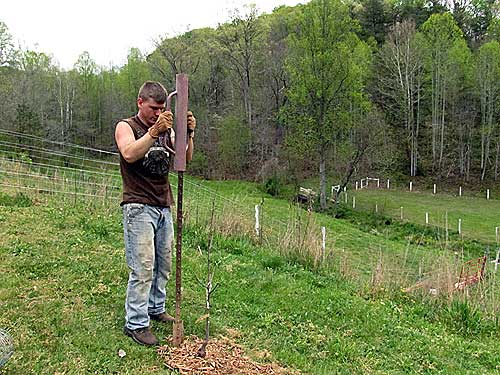 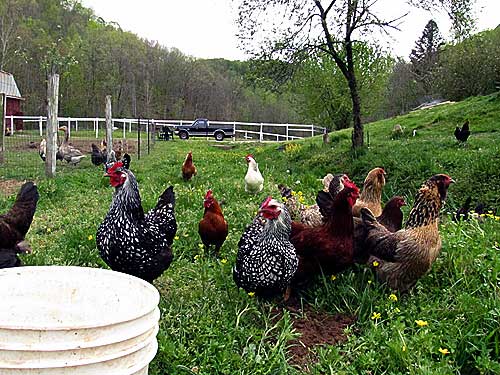 We planted ten trees that day. Fig–on the south side of the house, where it will be protected from the coldest temperatures in winter. Two paw paws (because they need a pollinator) in the side yard from the studio, where they can get some shade during part of the day. On the hillside between the studio and the upper pasture, where they will get full sun and good drainage: One peach tree, one apricot tree, and two plum trees (because they need a pollinator).

The apricot tree is my favorite because it looks like a tree. It has leaves. (It came from a garden center.) 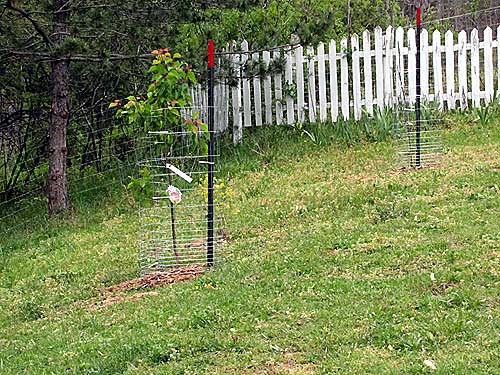 Down by the creek where the apple trees are: One mulberry tree, and two hazelnut trees.

The guide said to lop off 1/3 to 1/2 of the hazelnut trees and paint the remaining trunks (trunks? sticks?) with a white latex to protect them from the sun the first year. I had to put white latex paint on the shopping list because I didn’t have any, and I wussed out on lopping the sticks. Though when I go back to paint them, I will try to gather my courage.

My sassafras tree arrived on a later day. I have sassafras trees in the woods by the upper pasture. They’re hard to get to and you can’t see them from the house. I decided it would be fitting to plant one near the gate and the farm sign. Sort of like signing my name in ink rather than pencil on this farm.

I realized I forgot to get a pear tree. I thought I’d gotten one. If I get out to the garden center soon, before Ross the hole digger is gone, I’ll pick up a pear tree. There’s room for more in my little “orchard” on the hillside above the studio. I might try one of those cold-hardy kiwis. Will see what I find at the garden center. (Anyone tried those cold-hardy kiwis?)

Meanwhile, I walked around this weekend admiring my nicely-planted fruit and nut trees, feeling smug about my assiduous tree planting study. I feel proud managing my farm myself, making plans, carrying them out, and I am really enjoying it. I’ve got BIG plans for a garden (I’ll go over those sometime in a future post) and I want berry bushes, but I was adamant with myself about sacrificing everything else this first spring to getting trees in the ground. I’ll get my garden set up sometime this summer, and I may not plant anything in it this year but a fall crop, and it may be next spring before I plant berry bushes. I’m focused. I want trees in the ground. And I want to take on each task and do it right (er, brief lapse with the maple trees notwithstanding, which is a fine representation of my former rampant impetuosity). I had some guys out here the other day, by the way, to go over my milking parlor. SarahGrace and her little team of helpers on her farm are sure BP and Glory Bee are both bred! Like studying beekeeping a year in advance of my plan to get bees, I will have a fantastic, under-roof, lighted, ever-dry milking parlor in a stall in the barn with a strong headlock cemented in the ground, and I will have it in place months before they calve. I do not have any chicks or ducklings or goslings because I don’t have a chicken house or a brooder yet. I’m not bringing home anything I’m not ready to support.

Such patience and planning! (Who are you and what have you done with Suzanne?) Not that all my fine planning always works out. Case in point: Patriot’s escape from the field carefully secured by an experienced farmer and horse owner himself.

Anyway. Back to my admiration of my tree planting work. Then I noticed that I’d planted one of the paw paws directly under a power line. All that careful study……. LOOK UP, SUZANNE, LOOK UP!

We’ll be moving that one here in a few days. 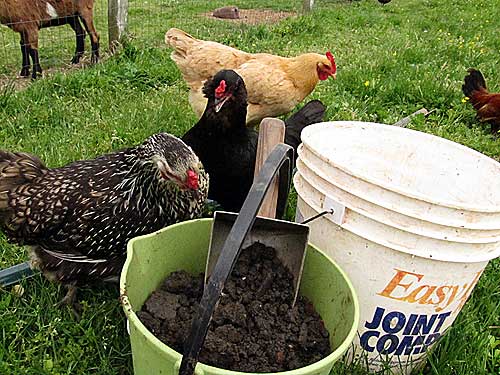 I’m sure the chickens will be there.