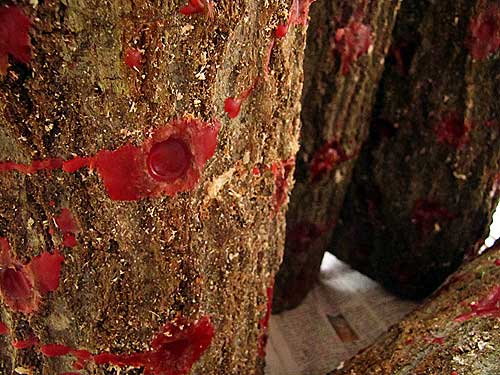 I became enamored of shiitake mushroom logs when Leslie and Diane brought one to me at the Chickens in the Road party this year. It wasn’t long before I got to enjoy my first mushroom harvest. I was hooked and eager to inoculate more logs! (See Growing Shiitake Mushrooms.)

You can grow shiitake mushrooms either by purchasing a log already inoculated with the mushroom spawn, or inoculating your own. To do it yourself, first you need the shiitake mushroom mycelium, which you can buy in pre-made plugs or you can buy the spawn by the bag and make your own plugs. Leslie and Diane had also given me a bag of mushroom spawn, so I was ready to make my own plugs. I just needed a tree. We cut down a red oak. Hardwood is best. Once you have your tree, cut it in logs no more than four feet long,

You want relatively fresh wood, just a few weeks from being cut. If the wood is too fresh (less than a couple weeks), it still has its anti-fungal power and may fight off the spawn. If it’s too old, it won’t have enough nutrients left in it to grow the spawn.

Leslie and Diane came out to demonstrate and let us borrow their inoculation tool.

Drill holes using a 5/16-inch drill bit deep enough to fit the plugs (a spiral pattern is pretty when they fruit). 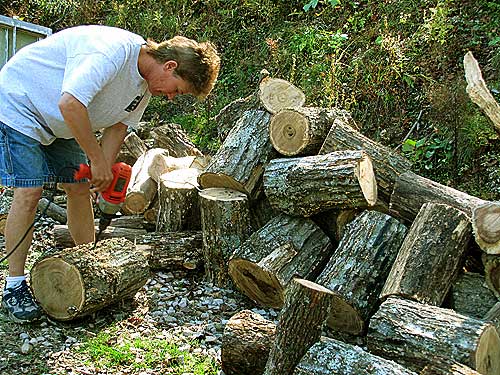 Push the inoculation tool into the spawn to fill the tip with a plug. 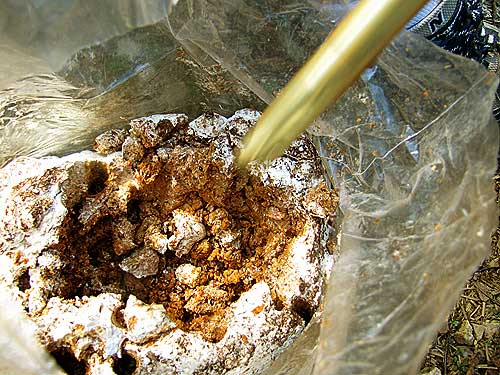 This is the inoculation tool. 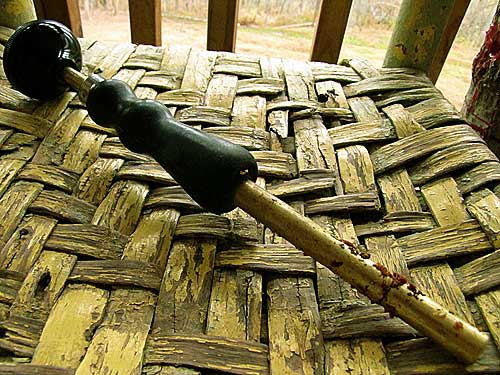 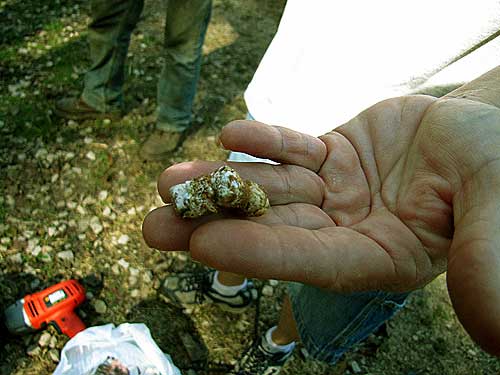 Though you don’t normally want to deposit them in your hand. You want to shoot them into the logs! You just poke the tip into the holes in the logs and shoot it in there. 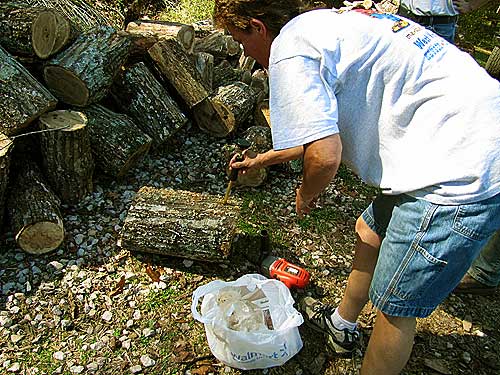 Seal each hole with melted wax. (Cheese wax is recommended.) This keeps insects or other fungi from contaminating the plug. 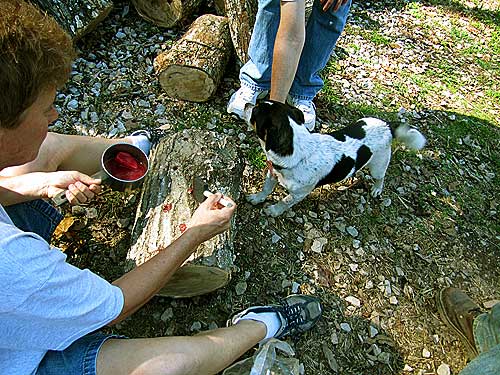 Leslie and Diane said, “Why is your wax red?”

I said, “Because it’s cheese wax!”

Apparently they use some kind of clear cheese wax. That is probably cheaper, I have no idea. I make cheese, so I have real red cheese wax on hand.

They inoculate large numbers of shiitake logs at once and stack them for over-wintering the first year. We just made about a dozen, using this one bag. After we cut our tree and let it “ripen” for a few weeks, we inoculated the logs on the porch. I put newspaper under them while I was sealing them with the wax. When I get my hefty helpers lined up, I’m going to move them to the “shiitake log section” out past the chicken house. The logs should stay outside all the time, in a shaded area, and have contact with the ground. They’ll fruit naturally in the spring and fall, but can be force-fruited every 8 weeks. (They are dormant over the winter.) To force-fruit, soak (submerge) the log in cold water for 24 hours, which mimics winter and sparks the log to produce, as if it’s spring.

I’ll be giving some shiitake mushroom logs as holiday gifts this year, and keeping the rest to harvest throughout the year, force-fruiting one or another. 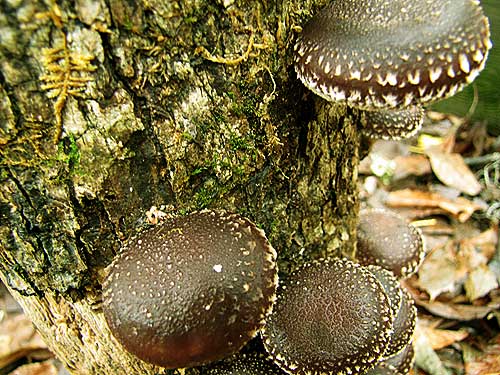 Shiitake mushrooms all the time! I love it!