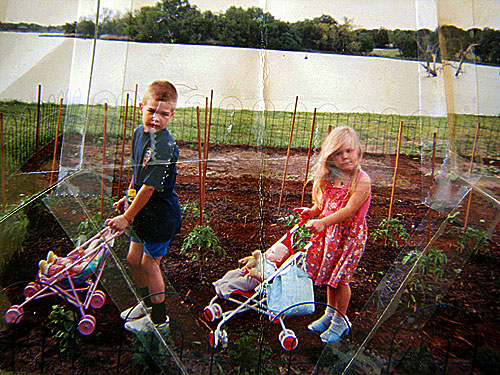 Morgan must have been about three in this photograph. Weston would have been going on six. It’s torn up and taped together and generally bent up because Morgan showed it to Weston at some point. The humiliation of having a moment in time recorded in which he pushed a doll carriage through a garden was too much for him to bear. Morgan managed to get the photo away from him and make this effort at recovering it. Then she gave it to me and told me to hide it.

In other words, Weston is going to be really excited about me posting it on the internet!

Based on the early state of the garden, it was probably around March. Spring comes early in Texas. At the time, we lived in a house on the lake. We had two acres and it was very lovely and secluded. Later, a developer bought the land across the lake and it was turned into an expensive subdivision and there went the privacy. But back in the day of this photo, it was very quiet there. That was when I had ducks–I didn’t have to buy them, they came to me. A duck laid a nest in our boat. We adopted the babies and they turned into pets. They were Muscovies, which is a wonderful, fascinating breed. I might get some again one of these days. They are large, heavy ducks that don’t quack, so they are quite an oddity. They can also fly, which has its good and bad points…. The kids had them all named. Morgan named hers Pink Pony, Purple Pony, Blue Pony, Red Pony, and so on. The boys’ ducks were all named after Pokemon or Star Wars characters. Anyway, I was searching for my old photo albums yesterday. I found a lot of other stuff, but not my photo albums, and got sidetracked combing through other old, fun boxes and never did get back to hunting the photo albums. I did find this picture, though.

Notice the “high heel” shoes Morgan is wearing. The dolls in the carriages are American Girl Bitty Baby dolls. She even had a little doll diaper bag. She and Weston were so cute. I love that picture, even with the tape.

In West Virginia, planting time is still just ramping up in March, not much going in the ground besides sugar snap peas and dreams. It’s the season to remember past gardens, think about what you want to plant, mistakes made, successes achieved. Hoeing. Sweating. I had all my big gardens in the past in Texas. It was hot. I reminisce fondly about some gardens–those near-perfect years where everything grows right, I didn’t forget to water, and I weeded. And then there are those other years where everything dried to a crisp or got eaten by bugs or just neglected to a slow, painful death.

The ghost of gardens past wafts around my bare, cold garden and whispers, This will be the best year ever. 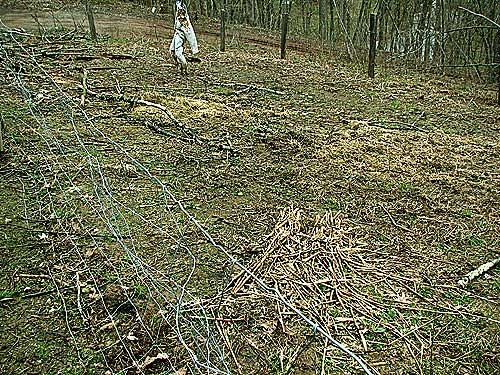 Because every year is going to be the best year ever. A garden is nothing if not an active expression of hope.

I had a system set up in that garden in Texas where I watered out of the lake, so there was really never any excuse for me to let my garden dry up back then, though some years I paid more attention to it than others, obsessing over making it perfect. Neat straight rows. Landscaping chips to hold down the weeds. A short, decorative fence to keep critters out, though it wasn’t particularly functional. It didn’t keep much out, but I didn’t have trouble with deer there. I didn’t can or dehydrate back then, so I didn’t preserve much aside from a few things I kept in the freezer. I grew a lot of hot peppers and tomatoes, though I experimented with just about everything else at least once. I was really into making the garden plot look pretty and I spent a lot of time weeding in the early mornings, making sure everything stayed very tidy.

I must have had a lot of time on my hands.

I don’t worry so much about what my garden looks like now. Sometimes I wish it looked a little cuter, though I don’t have time to spend hours manicuring it. Still, as I think back on gardens past and my goals looking ahead, I know that beauty in the garden does hold a meaningful pleasure. Just as with a beautiful bed of flowers, there is a certain aesthetic satisfaction to a beautiful bed of vegetables. Maybe even more so, as the beauty is followed up by the function of putting food on the table. Maybe I will put “cute” on my garden goals list this year–and work on some easy, no-fuss ways to make a garden prettier, without killing yourself working on it. There is a house several miles from here that I drive by every day when I go to the high school and they have one of the most gorgeous, perfect gardens I’ve ever seen. I think the man who lives there is retired. I slow down and admire the garden every time I drive by. And I think, maybe someday my garden will look like that….

Or maybe I could just go take pictures of his garden and pretend it’s mine? THIS IS THE INTERNET!!!!