I never thought of lamb’s ear as a cultivated plant as I see it growing wild around here all over the place, but it’s popular in beds and borders for its silvery-green textured leaves that are shaped like, you guessed it, a lamb’s ear. I didn’t know it flowered, and I’m not sure why that is considering, as I said, it’s all over the place. I can’t blame the animals as it’s one of those plants they don’t like to eat. You’ll see a grazed-down field with lamb’s ear popping up all over. It’s actually considered to be an invasive plant, but I’ve got a couple of them in my herb garden.

I was surprised to see how pretty the blooms are. This one (which comes with a bug!) is just beginning to flower. 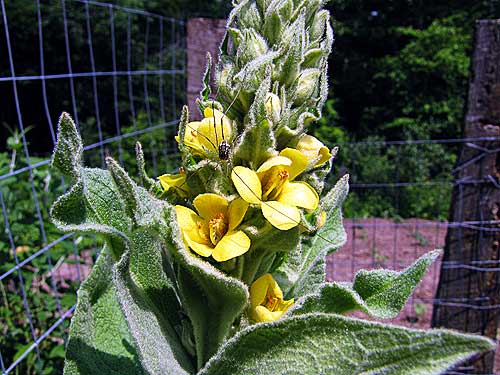 My curiosity was aroused about lamb’s ear when someone commented recently saying they ate it in salads. I had always assumed there was something not-so-good about it since the animals will ignore it in a field, so I had to investigate. I mean, assuming it’s edible, the leaves look kinda fuzzy….. 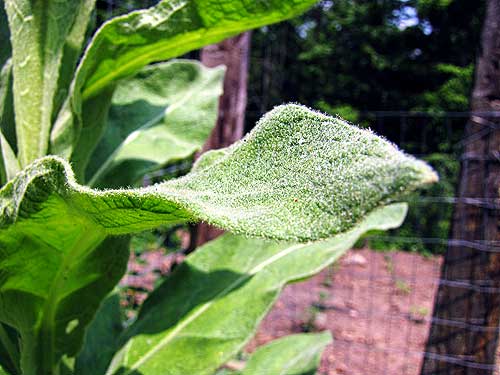 Which makes my tongue curl up and my mouth want to seal shut.

What I found was that some people do eat the leaves, but it’s not common. Because for most people, the idea makes their tongues curl up and their mouths seal shut. And while the plant isn’t harmful to animals (as far as I can find), animals have the same reaction. However, it is edible.

It has also long been used as a medicinal plant for its antiseptic, anti-inflammatory, and anti-bacterial properties. The fuzzy leaves are absorbent and can be turned into makeshift bandages.

In the course of my research, I realized there are two very similar plants. Lamb’s ear–and wild mullein. I caught onto this fact when the lamb’s ear articles all kept referencing the pink or purple flowers. My flowers are decidedly yellow. Here are the basic differences between the two plants:

Mullein (Verbascum thapsus) grows as a “foliage rosette” with a central stalk that produces yellow blossoms. Lamb’s ear (Stachys byzantina) grows as a “foliage clump” and produces pinkish-purple flowers. While the leaves are quite similar, mullein grows much taller and lamb’s ear leaves are softer. The most obvious, easiest identification is in the color of the blooms. 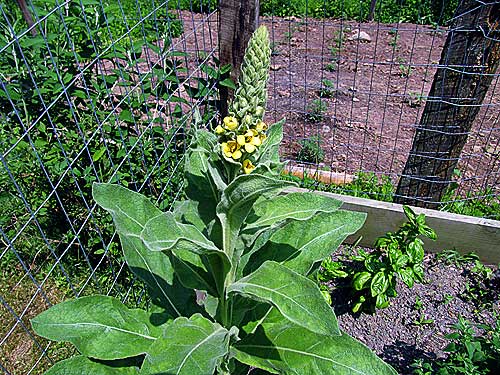 What I have here is wild mullein. So, is mullein edible? Yes, yes, it is! Its list of medicinal properties are similar to lamb’s ear, as is its edible status–and accompanying lack of edible interest on the part of many humans and animals. Also like lamb’s ear, it can be invasive. And further, it doesn’t bloom in the first year, which may be why I’ve seen it so often not blooming in our fields. From year to year due to trampling or turning over ground etc, we probably don’t get a lot of second-year mullein around here in the fields where it’s most readily visible. I got these mature blooming mulleins because they are protected inside my garden.

I’ve never heard anyone around here call this anything but lamb’s ear, so I feel super genius-like for making this earth-splitting botanical discovery. I conquered this wild mullein, uncovering its secrets all on my own. I always like to get one over on the “old” farmers. 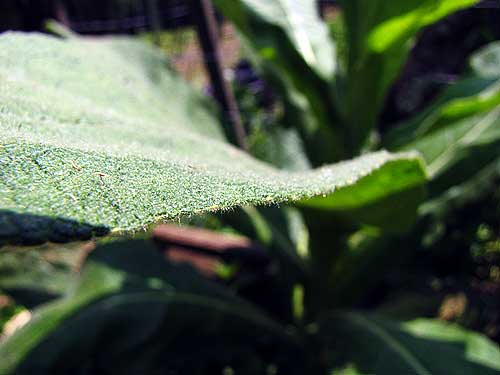 Then the old farmers run me over with their old tractors and put some yellow “lamb’s ear” flowers on my grave.