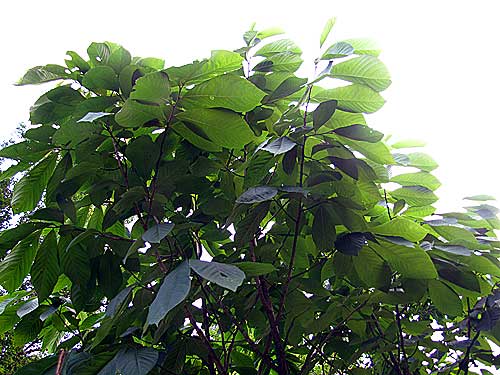 I talked about the pawpaw trees in my upper pasture a few days ago and had some curious questions, and I realize also that some of you reading here may not have even heard of pawpaw trees. I’d never heard of pawpaws before I moved to West Virginia several years ago. Pawpaw trees are native here and pretty widespread, so you’re liable to find them on most any farm, though I never knew of any at Stringtown Rising. I knew I had pawpaw trees across the road here, but I hadn’t paid much attention to the trees in the upper pasture (other than the sassafras). When I’m in the upper pasture, I’m usually looking at a) animals, b) water, or c) grass. That tends to take up my available attention span. It took Adam to point out the pawpaws, and then I realized they were everywhere up there. They border the meadow all the way up and down, mixed in with other trees such as sassafras and mulberry.

One smallish stand of pawpaw trees away from other trees where you can see the size and shape of the trees: 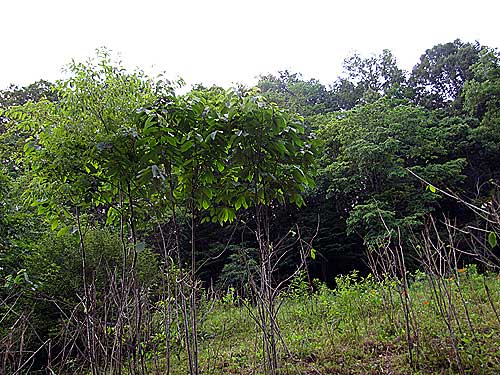 I can’t walk around up there without everybody following me, of course. 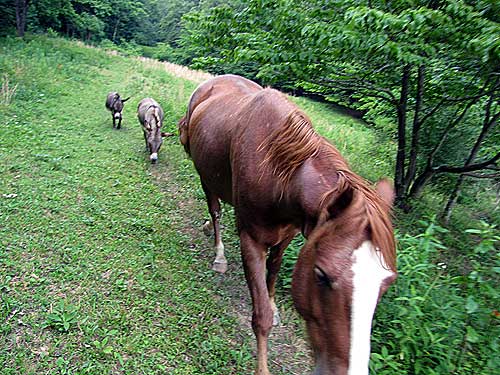 Pawpaw fruit is sort of banana-ish. They’re often described as a cross between a mango and a banana, with a soft (custard-like) consistency. (Like a banana.) It belongs to a tropical family but grows in a temperate climate. People have been eating pawpaws for a long time. Native Americans ate pawpaws. Lewis and Clark ate pawpaws. Thomas Jefferson ate pawpaws. Our great-grandmas ate pawpaws. But for some reason, pawpaws have not been mass commercially cultivated and distributed to grocery stores, so if you live in an urban or suburban area, you may never come across them though they do show up in farmers markets occasionally. The limited availability and distribution may be because they have a short ripe period and short shelf life. I’ve been contemplating what to do with my pawpaw plenty. Like bananas, they are probably not a good candidate for home canning (and I doubt there is much if any study into the safety of canning them). However, they should be good for preserving the way I preserve bananas–mashing and freezing, or dehydrating.

Ripe pawpaws will fall off the tree when you shake it, so they aren’t hard to harvest, even from tall trees, and you can use them in much the same way you might use a banana. Pawpaw bread, pawpaw muffins, pawpaw cream pie. Pawpaw ice cream, anyone? I’m sure to have a lot of pawpaws here when they’re ready. Pawpaws have to be used quickly or they go bad (like bananas) so I will be doing a lot of mashing and freezing to save pawpaws up for later.

I planted two pawpaw trees in the yard to the side of the studio this spring. 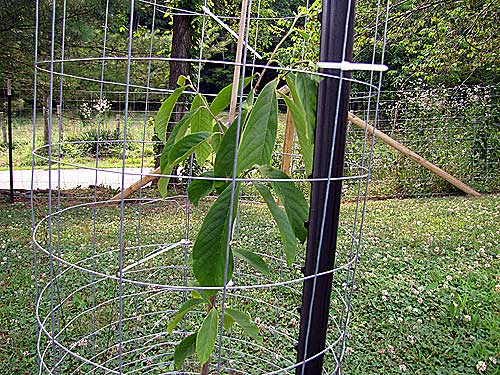 Why plant pawpaws? You can read a little story about pawpaws at the NPR site here, and if you watch the video in the story, you can see a cultivated pawpaw and a wild pawpaw side by side. You get a much bigger bang for the buck with a cultivated pawpaw–same size seeds but more fruit. And it’s a little handier right in the yard, though foraging from the wild always come with a little more excitement. Of course, I also didn’t realize at the time just how many pawpaw trees I had. I have a veritable pawpaw orchard.

Stay tuned for a pawpaw recipe palooza around September when I find out how plentiful my pawpaw patches will be. Pawpaws do need cross-pollination (which is why I planted two compatible pawpaw trees in the yard). If a patch of pawpaws isn’t producing, it may mean the patch comes from root sprouts of the same original tree and there’s no pollinator, so there’s always the possibility that I won’t have as much fruit as could be expected based simply on the number of trees.

I shall find out!