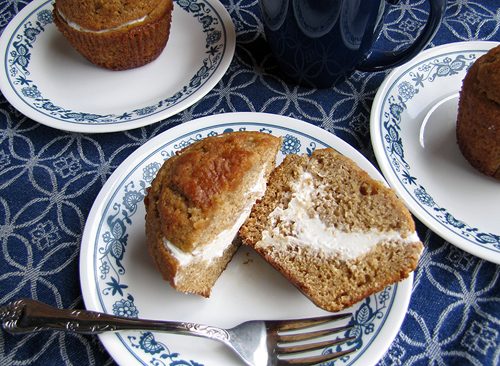 A few months ago I got an entire new set of Old Town Blue Corelle, serving dishes and all. I absolutely fell in love with the pattern. Someone mentioned recognizing the dishes in another post, so I wanted to highlight them here. Old Town Blue is actually a retro pattern brought back to stores new now, though you can often find them in vintage stores and flea markets, too, if you have the patience to put a set together piece by piece!

From what I can dig up, it was first produced in 1972. They later produced another similar pattern called Blue Onion, and more recently True Blue, but nothing is the same as Old Town Blue, so they brought it back. The popularity of the pattern can be seen in its collectible fashion–check out the 63 Best Images of Old Town Blue and Blue Onion on Pinterest, for an example. I see some pieces there I don’t have…. I want that butter dish!

I didn’t care for Corelle much for many years. I didn’t grow up with any Corelle. My mother loved her fine dishes. She had a (gorgeous) set of Franciscan Apple dishes for daily use, and several sets of fancy china. I never cared for china–too fancy for me!–and never cared for Corelle–perhaps because I was brought up in the atmosphere that one always set the table, even with small children, with “nice” dishes. You didn’t worry about the children breaking the dishes. Heavens, no. The children were well-behaved. OF COURSE.

But then I did get some Corelle dishes when my kids were little. Because they weren’t well-behaved and for some reason I didn’t even particularly expect them to Not break the dishes. (Hmmm.) I considered them throwaway dishes. (They were the more plain jane Cafe Blue Corelle.)

When I decided to get some new dishes recently (I had distributed out some of my other dishes to my now grown-up children), I had a craving for Corelle, and it absolutely had to be Old Town Blue. I can’t even explain why, but it just called to me. Got any Corelle? Favorite patterns? Are you a fan? And are they your “throwaway” dishes the kids can’t break, or your “real” ones?

P.S. In the photo above, I’m experimenting with “frosting inside” mini cakes. That’s some apple spice cake with vanilla frosting. It was delicious.