People who read this website regularly and for a long time know that I used to write romance novels. There’s a somewhat amusing little piece I wrote here about typical romance novel storylines, but one of the common plots involves the man who turns up, he’s on the run for some reason–if it’s from the law, he’s innocent, of course. Or sometimes he’s a secret prince!–or a billionaire!–looking for a different life, trying to escape the trap that he’s in. He shows up at the heroine’s little shop in a small town, or sometimes on her farm, and goes to work for her while he figures out his life. They fall in love and she uncovers his secret troubles and things go all kinds of bad and wrong–followed by a happy ending!

Anyway. I’ll get back to that….. Yesterday, what showed up here was hay. Three trailer loads. Forty round bales. (And a 41st bale that wasn’t quite right and got thrown in for free.) 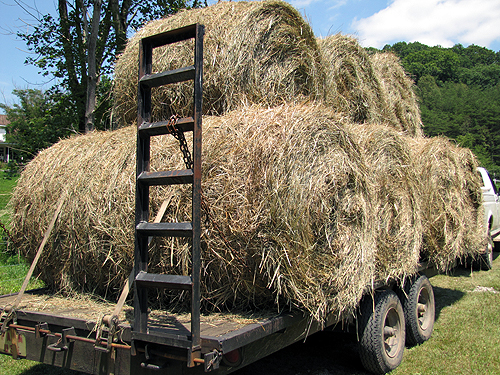 There’s a hay spear on the back of the tractor, but the hay man brought a front spear for us to use to unload, which makes it easier to get the bales off the trailers. 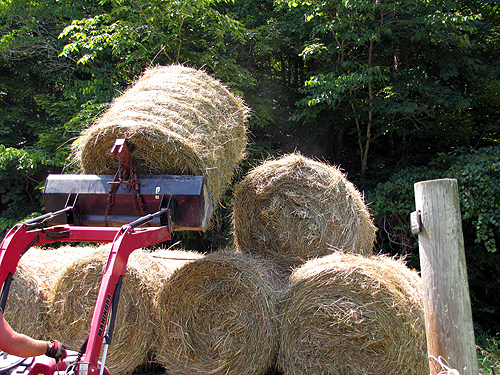 The first bale that comes off is laid down and then speared onto the back. 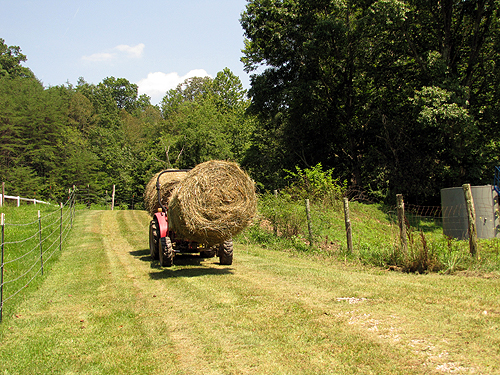 That makes weight to balance the tractor while unloading bales with the front spear. 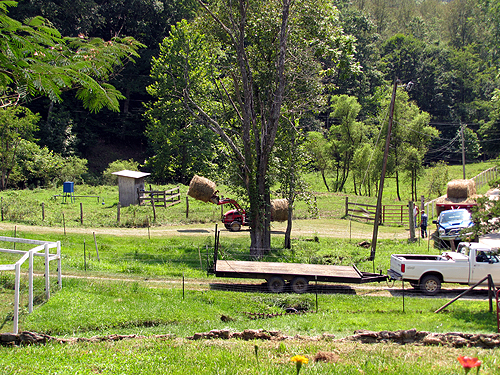 I love hay. I love how it smells. The sweet grassy fragrance of winter security. That’s my boyfriend, by the way. The one running the tractor. I didn’t take any pictures of him that showed him because I hadn’t shown a picture of him on my website…. Well, not for awhile. Because you’ve seen him before, those of you who read this website regularly. He asked me if I’d taken any pictures last night that showed him and I told him I hadn’t because I didn’t know if he would be comfortable with that, now. He told me he didn’t care if I showed pictures of him or used his name. You know, again. After all, I’ve posted plenty of pictures of him and written about him by name in the past! Oh! Well then.

Back to what I was talking about in the beginning…. A man did turn up here at the farm and went to work for me–just like a romance plot! He worked for me here all last year. By day, he works for an oil and gas company, but in the evenings as a side job, he came out here and fenced and re-fenced and built and re-built and trimmed goat hooves and gave wormer shots and moved cows and farriered the horses. He installed a new gas line under the house and installed new heaters in the house and the studio. He taught me to drive a four-wheeler and a tractor, and chopped down trees and stacked firewood. He showed me how to skin and gut a deer, how to shoot my new guns, and how to hunt for squirrels. He came up with ideas and solved problems and did more things than I could ever list, and he got to know this farm better than even I do. Over the course of the year, we got to know each other and became friends and I got to where sometimes I even made up reasons for him to come out here. He cleaned out my cellar and reorganized it and turned it into the “woman cave” cellar bar, and spent a lot of time in the cellar bar with me, talking after finishing up work around the farm. And he wasn’t on the run from the law or a secret prince, but he was ready for a change in his life–and for me.

Next time I’m out taking pictures, I won’t hide his face. 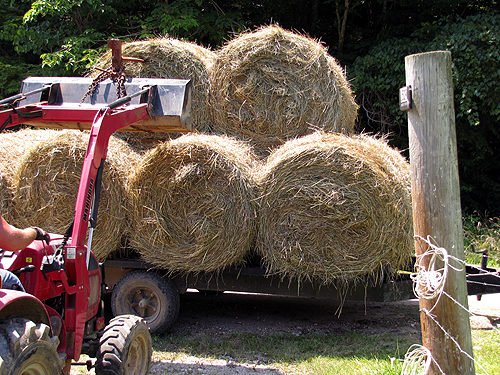 His name is Rodney. He was one of my hired men last year. And now? He lives here.

P.S. It was nearly dark by the time we got as much of the hay covered as we had tarps and plastic to cover. 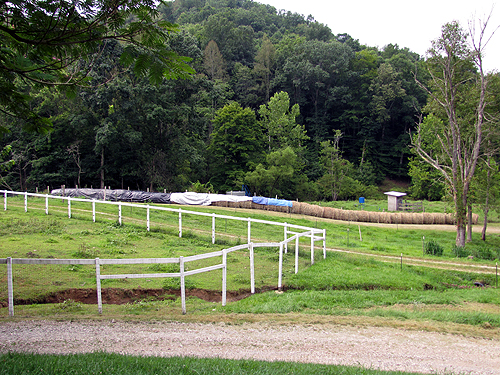 We’ll try to get the rest covered by tonight if it doesn’t start raining on us before then!