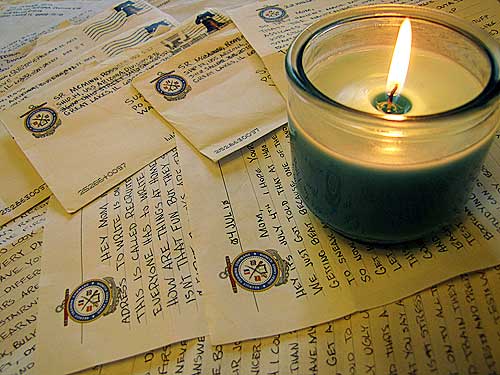 The lighting of a blue candle is a tradition with several different stories. The candle is lit for sailors separated from their families during the holidays, for sailors in danger far away, or to light a sailor’s way home. It’s also popularly used as a way to mark the time recruits complete the most arduous part of their training–in a sense, to bring them “home” to complete boot camp and become sailors.

Ross begins what is known as “Battle Stations 21” at 2200 tonight. This is a 12-hour grueling rite-of-passage aboard the Navy’s 210 foot long (3/4 scale) destroyer, the U.S.S. Trayer, a simulator first commissioned in 2007 and loaded with Hollywood-style special effects. Events through the night include missile attacks as well as fires and flooding from undersea mines. It’s designed to replicate terrorist attacks, battle damage, and at-sea disasters. Every recruit must pass battle stations before becoming a sailor.

If Ross doesn’t pass it, he will not graduate.

Which will make for some pretty tired sailors on graduation day.

Some of those who do not pass will never pass, and their careers in the Navy will be over.

Here is a CNN on-scene video about Battle Stations 21.

Ross. Will. Pass. And this Friday, I will see him here:

And I’ll need some tissues.

(That’s a long video, but if you just watch the first couple of minutes, you’ll get an idea of the pageantry.)

I’m leaving first thing tomorrow morning to start driving to Great Lakes, Illinois, with Weston and Morgan. I’ll be updating as I can. (At some point after battle stations, Ross will be allowed to make his “I am a sailor” call. I don’t know when that will be, but I will already be on my way to Great Lakes.) Thanks for understanding if my post schedule is more haphazard than usual while I’m on my trip. This weekend, Ross will have liberty before heading to South Carolina for two years of nuclear power training as he prepares for work on Navy submarines. Not sure what all we will be doing this weekend. Ross asked for some good food and a long shower, and he said he wanted to see the sun!

P.S. You can light a blue candle for Ross and the others boys in his division tonight, if you want! It can’t hurt!

P.P.S. If you have a child joining the Navy, I can’t say strongly enough–join Navy for Moms. Saturday night, I had been on the phone with my dad for about half an hour. He talks really slowly and I had sat down and clicked on the internet while he was talking. I clicked on my division group from Navy for Moms. There was a message from another mom of a boy in Ross’s division–she said they had been given a reward and were at the NEX making phone calls RIGHT NOW. She was on the phone with her son. I said, “Dad, I HAVE TO GO. Ross might call!” My dad is 85. He has never used the internet. Not only did he not understand the magic by which I had this piece of information, it was hopeless to explain it, and it took a few minutes to get off the phone. Believe me, the phone didn’t leave my hand. Within minutes, it rang and it was Ross!!!!!! I said, “I knew you were going to call!” I got to talk to him for a whole hour. The internet really is a beautiful thing. You can find Navy for Moms here.

P.P.P.S. I told Ross that I’d watched this graduation video on YouTube and couldn’t wait to see him marching at his graduation. He said, “I hate marching. It will all be for you, Mom!”