So yesterday I was in the midst of a huge blackberry jam-making session. I made regular blackberry jam, then I made blackberry-brandy jam, then I really got on my high horse and made spiced blackberry-rum jam. And I was thinking about whether if I just sat down and ate all the jam at once, would I get drunk? My mind is occupied with very philosophical things all the time. Then somebody came to the front door.

They were driving this car. Which I instantly decided should be mine.

Although I think Coco wanted it, too. 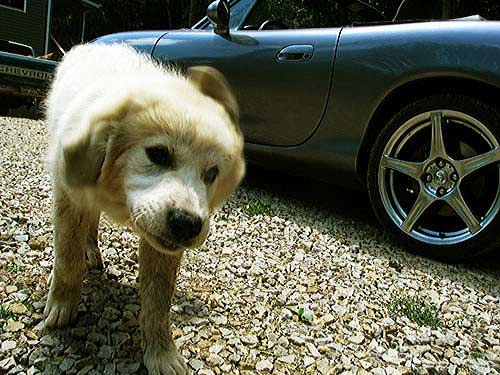 But aside from the fact that the car was way too cool to be on this road, I know what it means when strangers come to the door. Strangers have come to the door exactly twice since I moved in here and both times they were here to complain about 17, who drives too fast and makes too much noise and is too much of a teenage boy. (Nothing makes you more popular when you move in somewhere than to bring teenage boys with you. I try! He’s a teenage boy!!!)

And so, of course, I was not eager to go to the door. Since 52 was on the front porch at the time, I decided he could intercept the latest memo to the complaint department and I would finish making my last batch of jam. I’d just started working on the first boil. I noticed he was taking a long time out there and I thought, wow, this must be some complaint! But wild horses couldn’t have dragged me out there. Besides, I was working on jam and I hadn’t even had a shower. It was only noon! I do anything involving sweat or grime before noon. I don’t take showers that early! People are lucky if I’m wearing pants by then, and it just so happened I was. (Miracle!)

Thirty minutes later when I was about done with the jam, 52 came inside and said, “That’s Jerry Waters out there. He came here to meet you.”

If you are not from West Virginia, Jerry Waters is a retired radio talk show host and photographer for the Charleston newspapers as well as a founder of Bridge Day (a huge event in this state).

Oh, sure. So totally my life. A well-known person in West Virginia media comes to my house and I totally ignore them for thirty minutes and I haven’t had a shower. However! Not to be deterred by MY LIFE, I scampered out to the porch and shook his hand with my blackberry-stained fingers. Then I showed him around the farm like I was guiding him through exhibits at the World’s Fair. 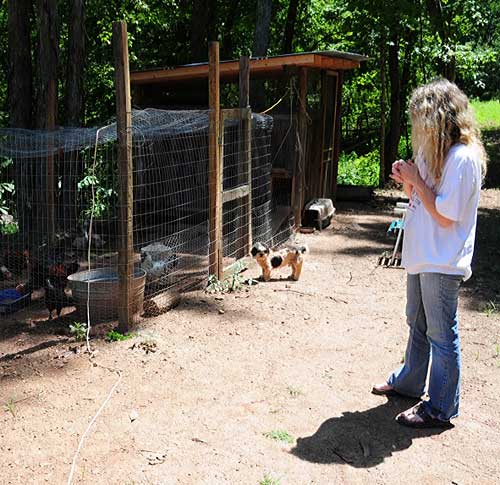 And then this man, who is actually a professional photographer, took pictures of my farm animals. (He also took the above picture of me showing him the chickens.) 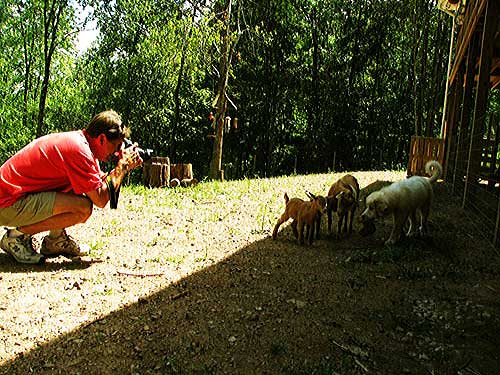 I think Clover was impressed with his camera. Or maybe that was the cookies I handed him to give her. (He took this picture of Clover, too.) 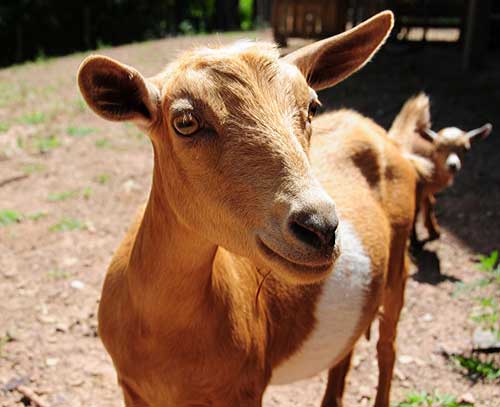 Then I gave him a jar of fresh jam and he drove away in his very cool car and I went inside to take a shower. And I thought, I oughta put pants on more often.