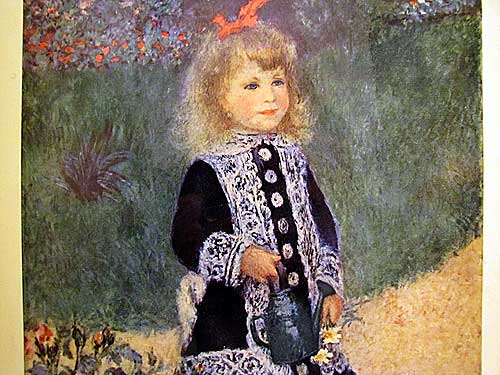 Renoir painted A Girl with a Watering Can in 1876, and the painting hangs in the National Gallery of Art in Washington, D.C. (You can see a full photo of it at the National Gallery website here.) I grew up in Silver Spring, Maryland, just outside D.C., and spent my childhood summers trailing around the Smithsonian’s numerous buildings, the National Gallery of Art, the White House, and other historic public buildings and museums after my mother, who was avid about exposing her children to culture. My favorite place was Dinosaur Hall at the Museum of Natural History, and anything that involved getting to run around outside at the National Mall. (If you don’t know what I’m talking about, this is not a shopping center.)

My mother was raised on a dusty farm outside a small town in Oklahoma, but she was born with silver tea services and fine china dancing in her head, so she got out of there as soon as she could. I was born in San Antonio, Texas, but the family moved to Silver Spring when I was two and my father, a Church of Christ minister, began preaching at a large congregation in D.C. My mother took full advantage of the location, constantly dragging her young children all over Washington, training us to whisper inside important buildings and to stare at paintings like Renoir’s A Girl in a Watering Can as if we cared when all we wanted to do was go back to the dinosaurs. Being one of the largest churches in D.C., numerous ambassadors, Congressmen, and other important people attended the church, and we would therefore get special entree for even more tedious touring opportunities inside Congressional offices and ambassador’s residences. Most big touring days were broken by a picnic on the Mall, which was second best after the dinosaurs.

All this to say, this was the world of my childhood until I was eight, when we made a bizarre 10-month move to Alabama, where we lived in a genuine antebellum mansion. I never understood this move until I was in my 30s. I had been FIRED from my middle school English teaching job (I didn’t have tenure yet, and the principal had discovered that I was applying for high school positions, so he didn’t renew my contract), and my father called me and told me that he had been fired once, too. That phone call completely explained our bizarre and sudden move to Alabama, leaving what was probably my mother’s favorite time period in her entire life in which she got to throw big parties entertaining Washington dignitaries. Most likely, the fabulous antebellum mansion made up for it, at least temporarily. (The church in Alabama owned the mansion and used it for their preacher’s home.) But ten months later, my mother just couldn’t take this life in the sticks (mansion notwithstanding) and my father moved the family back to Silver Spring WITH NO JOB, working for a time as a life insurance salesman. Soon, he was helping a small church in Martinsburg, West Virginia, which had no preacher, get back on its feet. My mother would have sooner died than move to Martinsburg, of course, so we made the long drive every Friday after school to spend the weekend, driving back Sunday after evening services. It was during this time that I got to eat a lot of really good food because the church members took turns taking us home between services on Sunday. They all had big gardens and put out a feast every time. Eventually, my father got a preaching job at a suitably large congregation in Falls Church, Virginia. (We remained in Silver Spring, but at least Falls Church was in decent driving distance.) My mother pulled out the silver and started entertaining again.

Back to the Renoir. My mother always threw big birthday parties for me, and my first grade party was no exception. I could really rake in the toys at these events. I was in the midst of ripping into packages when I opened one and pulled out a sturdy, ready-to-hang, laminated print of A Girl with a Watering Can. It was a stunningly odd choice for a seven-year-old, and I distinctly remember it as one of the most singularly disappointing gifts of my childhood. Where’s the beef? The look in my mother’s eyes kept me in line as I thanked the child who gave it to me and moved on to the next package, praying it was a toy. The child who gave it to me was probably as disappointed in their parent’s choice as I was. Not that I really needed any more toys, but just in case you’re shopping for a seven-year-old today, let me tell you that a print of a work of art is going to be a letdown when they unwrap.

However, this print always hung in my room as I was growing up. I’m sure at first at my mother’s insistence, and later out of habit. When I grew up and moved away, I took it with me. Over the years, in various places I’ve lived, it’s hung in hallways and bathrooms. I’ve never really known what to do with it or been particularly attached to it other than out of habit. Often, it has simply sat in the back of a closet. I took it with me to the slanted little house, and when I moved to Stringtown Rising, I left it at the old farmhouse, one of a few things I never bothered to move.

After I painted my bedroom here at Sassafras Farm, a bedroom–and a home–that is all my own–I experienced a sudden urge for the Renoir print. I stopped by the old farmhouse yesterday, retrieved it from the cobwebbed corner I’d left it in nearly four years ago, cleaned it up, and hung it on the wall in my bedroom. 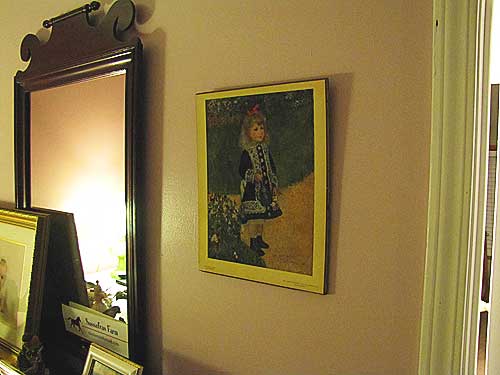 All these years later, I can assure you that it is the only thing still in my possession from my first grade birthday party. Maybe if you’re shopping for a seven-year-old today, you should get them a print of a work of art.

But if you do, bear in mind that you may have to wait forty years for them to appreciate it.