I found the following the definitions for “farmer” in various online dictionaries:

An owner or manager of a farm.

A person who cultivates land or crops or raises animals (as livestock or fish).

An individual whose primary job function involves livestock and/or agriculture.

But what makes a person a farmer?

I live on a 100-acre farm. Living on a farm doesn’t make one a farmer, though. I know a lot of people with rural property who do nothing whatsoever to engage in farming. They’re property owners.

I used to file a Schedule F for farm taxes until my accountant determined that I should incorporate Chickens in the Road and file my taxes that way, with no Schedule F. I don’t make a lot of money directly from farming (livestock, crops, etc). In fact, I make very little that way, which makes it difficult to continue to propose to the IRS that I’m a farmer. On the other hand, I manage pasture and livestock, so according to a different arm of the U.S. government, the USDA, I’m a farmer and qualified for farm programs. The government can’t even make up its own mind, so obviously they can’t be in charge of deciding.

But I make my sole living from my farm–which mean it’s not a hobby. I just make my living from a farm in an unusual way. I make a living writing about and photographing my farm and my farm animals, among other associated activities. Whether it’s my website, my columns, books, or teaching, it’s all about the farm or farm-related (old-fashioned cooking and crafting, etc). I also do get out in the muck every day and I work on my farm. I don’t just have a cow for show, I milk my cow. And that is true for all of my animals, unless you count Jack and Poky. I haven’t figured out why they’re here yet, but I’m sure there’s a reason. (Wait, I remember, they’re cute.) I operate my farm for profit.

I work full-time on my farm, but even full-time isn’t required to be a farmer. My great-uncle Carl operated a farm and he worked in the gas/oil fields for years. It’s not uncommon or new for farmers to have other jobs. Even farmers who don’t have other full-time jobs may take part-time or at least occasional jobs, often hiring out to work at other farms.

There tends to be two camps when it comes to how people react to newcomers on the rural scene. There are those who look upon us with suspicion and nothing we will ever do will make them see us as their equals, and there are those who are eager to help, guide, and teach from their long-held skills. They are the ones who see that we are part of the next generation to pass on skills they value. I think of these farmers as rock stars. They know everything I want to know, and a lot of things I’ll never know. But whether other farmers treat me like a fellow farmer or treat me like a pariah, that doesn’t truly settle anything either since letting other people’s opinions define your life is a slippery slope to hell.

Sometimes I have to wonder why I spend so much time pondering whether or not I deserve to be a farmer. If you take a job as an insurance salesman, they start calling you an insurance salesman right away. Same thing if you take a job as a teacher, a mechanic, or a professional football player. If you operate a farm for profit, doesn’t that automatically make you a farmer?

In today’s world of shrinking independent farms and skyrocketing technology, the simplicity of the farm life can seem almost magical to many of us, lending a reverential air to farmers as if they are part of some poetic legend. Perhaps that makes it even more difficult to call yourself a farmer. Almost as if you’re trying to call yourself Cinderella. Might as well claim to live in a castle while you’re at it!

And yet there actually are real princesses in the world today, and sometimes they live in real castles. There are also real farms and real farmers. You don’t have to marry a prince or be born to a queen to become one, either.

And so after my exhaustive nearly five-year search for the meaning of becoming a real farmer, I’m pretty sure the only person who can decide is you–not the government, not your neighbors, not the dictionary. A farmer is known by many things, but most of all by the dedication of their heart, the commitment to their pursuit despite all odds and all struggles.

Furthermore and in conclusion, I’m pretty sure a real farmer doesn’t even– 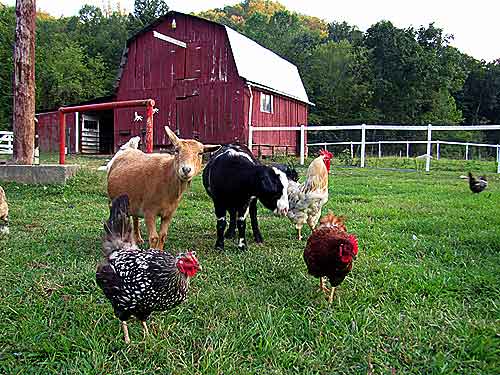 FINALLY! I KNOW WHAT TO DO!