Spencer is what I refer to as the “big” town here, though that’s relative to my “little” town of Walton. The entire county of Roane boasts a population around 15,000. My new farm is located on the far southern edge of the county, which means it’s as far from Spencer as it is from the city (Charleston), and with the interstate only 8 miles away, the city is pretty handy. But all things being equal, if I can’t get what I need at the (one) little store in Walton, I’d just as soon get it in Spencer as go to the city.

In Spencer there are traffic lights–and traffic! If I’m counting right, I think there are three intersections with traffic lights, and there’s only one main road through town, which creates a certain amount of congestion during popular hours (particularly right after school lets out). There is a Wal-Mart, and while Wal-Mart inspires much controversy as to its impact on a community and society, the mayor of Spencer has been known to say, “Wal-Mart saved Spencer,” and I think that is true. Wal-Mart provides a measure of “city shopping” that satisfies and negates most needs to travel further. In fact, Wal-Mart is an attraction that brings people in from the next county over. They have no Wal-Mart in their county, and they come to spend their dollars in Spencer not just at Wal-Mart but after they shop when they stop in at one of the handful of restaurants, pump gas at one of the two gas stations, pop into one of the couple of hardware stores for farm supplies, or stay for a movie at the Robey before they go home. The impact of a Wal-Mart on any given community is individual, and here, the store keeps as much money home as it takes away. Without Wal-Mart, all the little stores and restaurants would likely be folding up along with the sidewalks–just as they have in other surrounding areas where there is no Wal-Mart and shopkeepers have watched their customers hit the two-lane road with their wallets and head for Spencer. And if it weren’t for the Wal-Mart in Spencer, they’d be heading for the city–because they’re after a little “city shopping” and Spencer is just the closest place to get it. Much of the “influx” to Spencer, of course, is also from farmers in the outlying communities right here within the county. Back in my dad’s day, that was the big event every Saturday–a trip to Spencer. It’s still that way today. The businesses here that were able to overcome the challenge and thrive alongside Wal-Mart do so because they adapted to their looming neighbor, offering hard-to-find or specialty items with personal attention, playing to the needs of the rural customer who prefers not to go to the city. You can get your flour and sugar at Wal-Mart, then circle around town for everything else and go home without ever seeing an interstate.

The “outlander” traffic in Spencer is a specific type of traffic–it’s rural traffic. It fits in. There’s no interstate anywhere near Spencer. (The interstate that is 8 miles away from my farm is a long, long way from Spencer.) Spencer is a very insular town, nestled in the foothills of the Appalachian mountains. Access in or out involves long winding, twisting roads. When teenagers learn to drive, they are rarely allowed by their parents to leave the county. The roads are dangerous to novice drivers. For high schoolers planning a date or just looking for some fun, the city is out of reach. Here, a typical date night is dinner at one of the little restaurants on the square and a movie at the Robey. Your parents can drop you off at the square in front of the restaurant and pick you up when the movie is over because you can walk. In Spencer, you can walk almost anywhere. I’ve never seen as much foot traffic around a Wal-Mart anywhere else I’ve ever lived. Kids spend a lot of time hanging out at the Wal-Mart, browsing the store as a form of entertainment (most of them have no money) or just driving around the parking lot if they have a friend with a car. If they’re feeling more adventurous, there’s always mudding on a back road, riding four-wheelers, or camping out. Most of them have the same friends they’ve had since kindergarten, and the school is an insular sub-section of the county itself. There is only one high school in the whole county and its graduating class doesn’t always meet 200.

After high school and before he entered the Navy, Ross went to Texas for awhile. He worked at a Taco Bell and was surprised by the after-work plans of the teenagers with whom he worked. They always had plans that involved going here or there miles and miles away. In Texas, the roads are flat and straight, making fewer restrictions for teens and opening the world for their access. They could pick and choose restaurants and theaters and other entertainment. This allowed them to spread out, separate, go their own ways. Ross was baffled by the lack of cohesive community sensibility. It was just too easy for people to go somewhere else.

Yesterday, during his fly-by trip in and out, he told me he’d heard from one of his friends that a new interstate was going to be built and it was going to go through Spencer. He said, “It’ll ruin Spencer.”

I hadn’t heard of any such plans. I asked around and couldn’t find any confirmation of it so I suspect this is just a rural legend, but the rumor is enough to inspire consternation, most surprisingly, amongst people Ross’s age–who one would think would be the most eager for whizzing access out of this “boring” town. Where the interstate hits 8 miles from my farm, it is a rural intersect. (The nearest town is Clendenin, but Clendenin is far enough off the interstate to escape an impact. Passers-through don’t want to get off an exit and drive 10 miles to find a grocery store or restaurant.) But an interstate into the heart of this county, its “big” town, would change the landscape in irretrievable ways. It would bring a third (fourth, fifth, sixth) gas station, chain hotels, bigger restaurants, maybe a massive car dealership, and a wholly different sort of outlander stopping in at Wal-Mart from Florida because they forgot toothpaste for their trip. Worse, it would scatter the community, making trips to the city an easier breeze. The isolated nature of the county would be lost. Kids wouldn’t have to make up their own fun–they could go buy it in Charleston. It’s the very lack of easy access out that makes this county a special place where everyone knows your name. The world has a lot to offer, but here, we can decide when our kids get to have it, and when we go home, we don’t have to look at it.

One of my favorite photos of Spencer, taken in the winter. Many of the houses in town, surrounding the square, are perched on steep hillsides. Spencer is not all that different today than it was in 1950–in many ways. 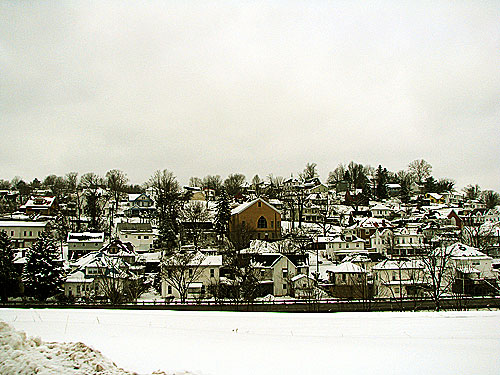 I was impressed that, at 21, Ross could already see how an interstate would have altered the experience he had here as a teenager, and how now that he is out in the big world, he values the community nest the hills and twisting roads provide. I’ve lived most of my life in suburbia surrounded by interstates, and I came here for what is lost there. Here? We don’t need no stinkin’ interstate.