“Conditions of life difficult to endure.”

“Something hard to bear.”

Religious leaders, prophets, monks, and the like historically sought out hardship. (Alas, not political leaders. It would be a good idea that should start now, don’t you think?) When we look back at historical figures (biblical and the like) who set out into the desert (or wherever) seeking hardship, it’s difficult for us to understand why they didn’t think their lives were already fraught with hardship. They didn’t have TV, dishwashers, remote controls, cars, electricity, or even an indoor bathroom. We live such cushy lives today, finding out the microwave is broken when we can’t afford a new one can feel like a hardship!

Of course, everything is relative, and we frame hardship based on our accustomed circumstances. A woman married to a billionaire for 20 years sees hardship when she’s awarded $10,000 a month in alimony. To her, that’s suffering and privation, while to another woman living in a trailer in the woods scratching out a life with kids in tattered hand-me-downs, it would be a lottery windfall. I’ve viewed hardship differently at different times in my life, based on experiences and changes in my style of living. I’ve lived in a luxury suburban neighborhood in a 3000 square foot house. I’ve lived in a slanted little house with no insulation. I’ve lived on a remote farm on a rock road that was sometimes completely inaccessible. Now I live in a little old house on a big farm with a barn and a nice paved road.

Many people see farm life as a life of hardship no matter how it’s framed, but I see my farm here as the lap of luxury after living at Stringtown Rising. That farm was poorly laid-out and, in a number of ways, not well managed–partly from lack of funds, partly from geographical challenges, partly from neglect, and partly from inexperience. But the hardships there certainly weren’t all self-inflicted (unless you count the decision to move there). It was a place that took you face-to-face with physical labor and mental endurance. Every day there was a test of some kind. Here, I appreciate the luxury of a barn, flat pastures, and a paved road. I appreciate the mail at the end of my driveway and the county plow truck after a snow. I appreciate things many of us take for granted because I lived without them–and therein lies one of the key values in hardship. If we never live without something, it’s not easy to properly appreciate it.

Hardship teaches gratitude and frugality. It gives wisdom and it teaches patience. It provides a richness to life that no amount of money can duplicate. Sometimes I feel as if my life here is too easy. I’m so accustomed to difficulty that it’s almost difficult to live without constant difficulty. And yet, at the same time, I never stop appreciating the convenience of the mailbox, the hay in dry storage in the barn, the stalls to shelter livestock, the water spigots at their buckets. If the power goes out to the well and I have to carry water from the house or the creek to the animals, it’s like old times! If I have to carry a bale of hay five feet, in the middle of whining to myself “This bale of hay is so heavy!” I remember that I don’t have to throw it over two stuck gates and climb in and over and roll it 50 feet across the yard to my cow. In the snow.

Without hardship, we have no idea of what we are capable. Hardship shows us who we are, down deep. It’s an exercise in our response–do we cry, snap at everyone around us, give up, or work harder?

Hardship comes in many forms, and the hardships that tag along with life in the country on a farm aren’t the only valid hardships in the world by far, they are just a category of the form. Perhaps a special category in the sense that choosing this kind of life is akin to chasing after hardship rather than waiting for it to cross our path–for the love of the land, the commitment to simplicity, or a certain dementia.

Through hardships, I’ve learned the importance of friends and family, self-reliance, determination, willingness to learn lessons and openness to receiving them, and a sense of humor. I know that I’m not finished learning from hardship because when I couldn’t start the generator on my own last week, I cried, I snapped at Morgan, I gave up, and then I worked harder. When I can eliminate all of those responses except the last one, I’ll be finished. 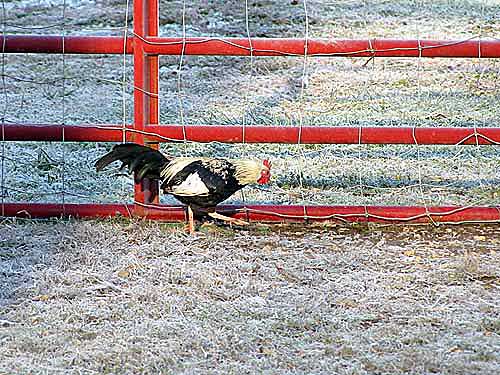 And then I’m moving to a condo!