I can’t tell you how hard it was to lay this egg. I’ve been working on it ever since yesterday. 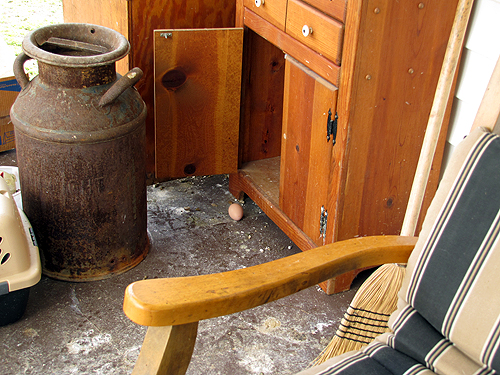 I’m just kidding. (Maybe.) But I’m actually pretty excited about it because it’s the FIRST fresh egg I’ve seen since I moved to Sassafras Farm. I don’t know if the chickens were distressed over the move or what. I know it’s winter, but I’ve never had all my chickens stop laying at once, even in the winter. I have a lot of chickens. Somebody’s always laying. Maybe they’ve been laying and they’ve been hiding them. But I’ve LOOKED. This one was laid on the porch this morning, so maybe they’ve finally gotten back to work.

The egg isn’t the accomplishment this post is about, though. Today, I finished my book. I’ve been toying with the idea of writing a book for some time, and started working on the book last fall. Then I moved and I stopped working on the book for awhile. I got back to it recently, made some major revisions on what I’d written so far, realizing I hadn’t been digging deep enough, and I wrote the book I really wanted to write. I became completely obsessed with it as it fell into place, turning into a runaway train that has barely let me sleep or eat for the past week. Morgan was lucky she was allowed to have a birthday as I worked on my book every second I wasn’t taking her out to lunch and shopping and making her a giant cookie. It probably explains my mental lapse in forgetting her candles.

Trash has been overflowing all over the house. Other than the giant cookie, I haven’t cooked in days. I’ve bought several store-bought frozen pizzas (!) because I can’t cook when I’m writing like that.

I can’t do anything when I’m writing like that.

The book had hold of me and wouldn’t let go until I’d reached the end.

What is the book about? It’s a true story, a memoir of my life at Stringtown Rising, from the slanted little house to Sassafras Farm. It’s the real story of Stringtown Rising. The whole story. The story I’ve never shared on my website. I’ve always kept a curtain at a certain point with my personal life here, but this book is straight from my heart to you, my readers, who have been here for me, encouraging me, supporting me, and inspiring me. It will answer questions you wouldn’t have asked me, but have probably held in your mind. It’s funny and sweet and sad and triumphant, and more of an adventure than I have ever told–or that I ever imagined I’d live in my life. And it’s all true.

I’ve been working with an agent for awhile, and it will be a while longer before the book is placed with a publisher, much less on the shelves, but I’ll keep you updated.

P.S. I’ll try to resume normal programming now. As soon as I pick up the trash.