One 2500-mile round trip later….. I’m back! Let me just state the obvious. IT IS HOT IN OKLAHOMA. 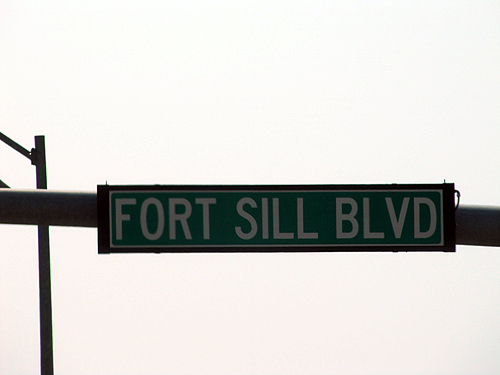 Fort Sill is a huge, sprawling, and not very attractive base, but we were thrilled to see it, as if we had arrived at the Magic Kingdom. Weston was there! Army graduations are different from Navy graduations. When Ross graduated from boot camp at Great Lakes (see it here), there was one big show–and it was quite a show with marching and bands–while the Army spreads it out over two days and it’s a more low-key affair. Graduation actually started with a Family Day on the first day, which was held in an auditorium and included demonstrations of their various uniforms and combat training. 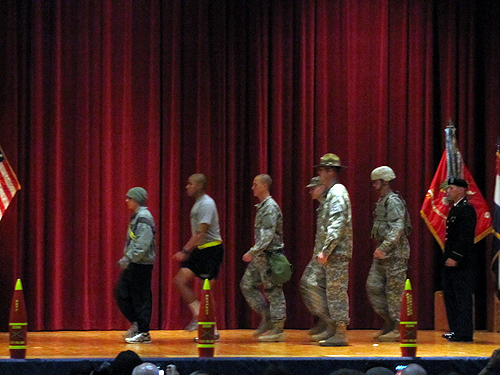 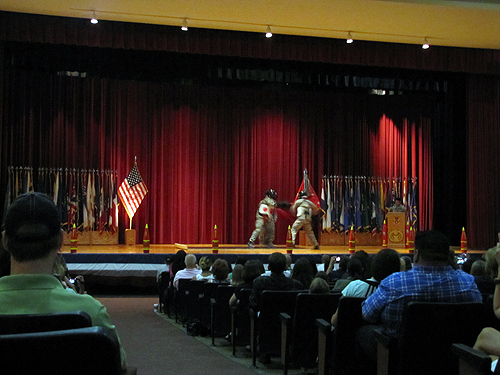 Then we got Weston!

When we could find him! 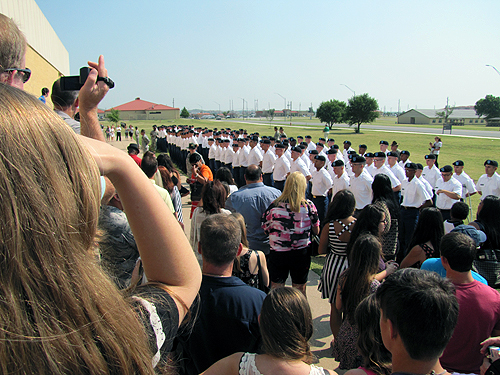 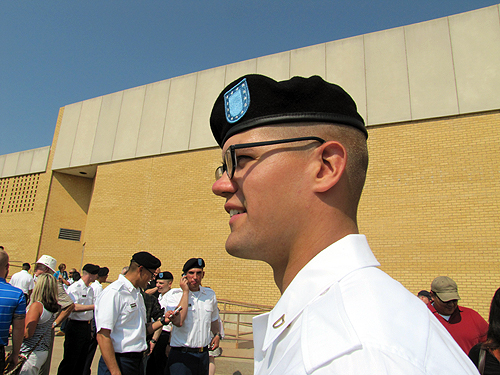 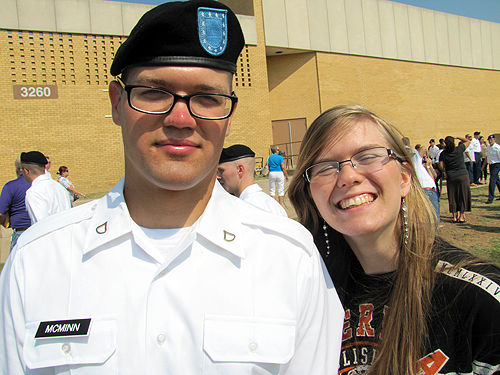 Til we got back to the hotel. 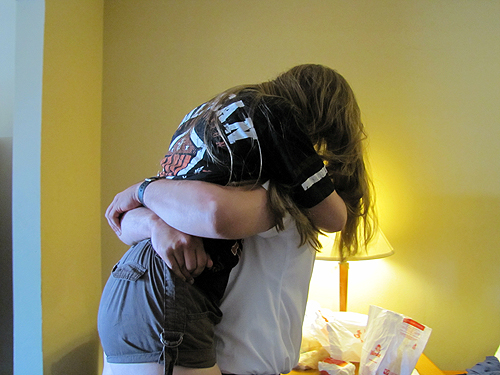 We stopped by Wendy’s on the way because he wanted a Baconator. He had a short list of things he wanted to do on his leave time. He wanted a Baconator, tortilla chips and salsa, a reunion with his laptop, a new cell phone, and cookies and cream ice cream. We did all of those the first day except the last one because by the time we took him back to the base, he was too full for ice cream.

The next day was the actual graduation, which took place again in an auditorium. We found Weston seated with his platoon in this amusing “modified rest position” (or something like that) which makes you want to do something to make them laugh, but that would be mean because they would probably get in trouble if they moved a muscle or made eye contact. 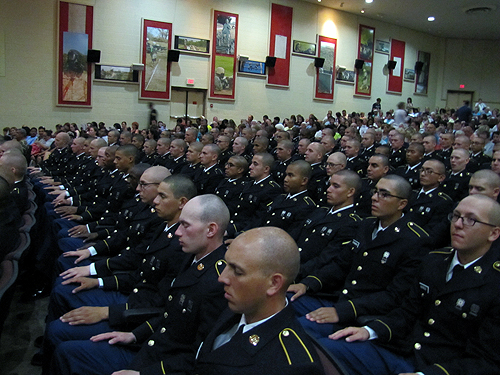 Weston is seated in the center of this picture (not wearing his birth control glasses). 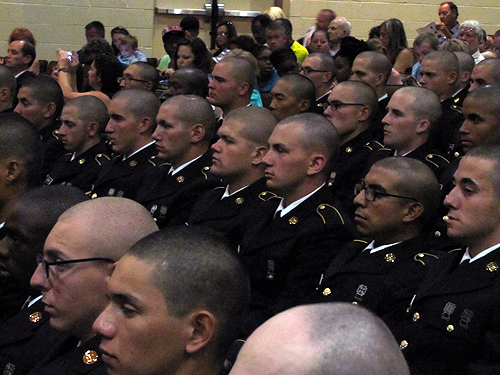 The ceremony included the national anthem, a recital of the soldier’s creed, a reaffirmation of their enlistment oath, singing of the Army song, and a brief video of highlights from their training.

They all came to the stage individually to state their name and where they came from and shake the drill sergeants’ hands. This is Weston. 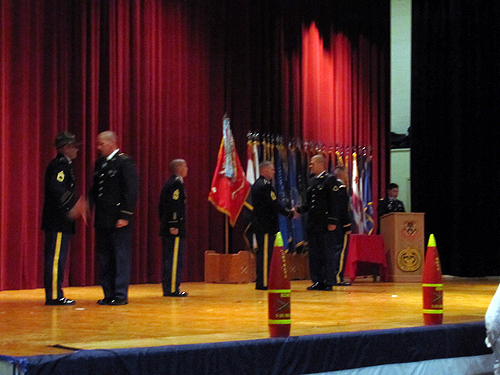 Then they all marched out reciting a rather amusing cadence about wanting the drill sergeants to go home. And we got Weston again! He was looking very official in his full dress uniform. 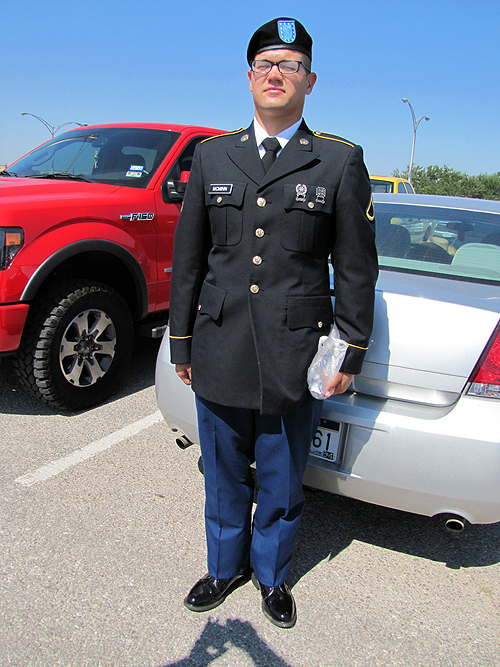 Cousin Paola from Oklahoma City met us in Lawton for lunch, and the girls had fun making him not so official back in the hotel room. 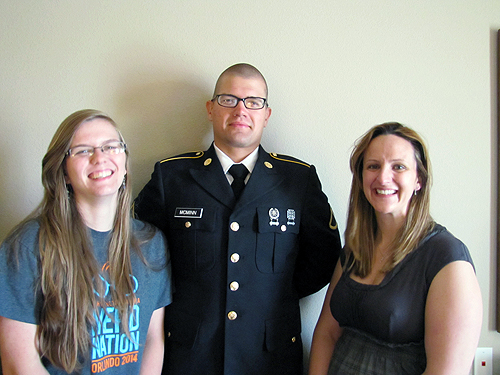 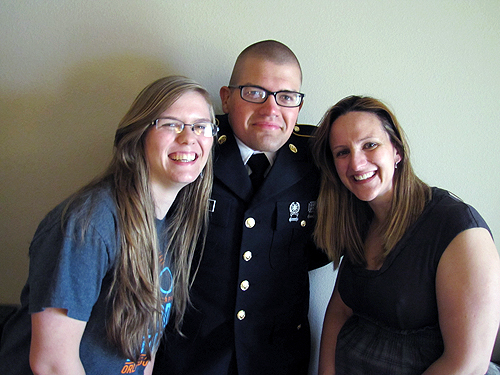 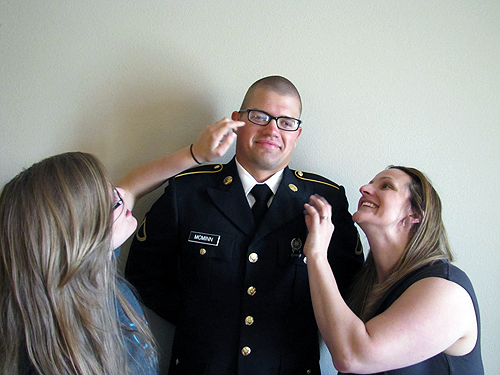 At the end of the second day, we had to take him back to the base again and he was out of Oklahoma before we were, on his way to his next school. He told us he’d get to come home for Christmas!

Oh, yeah. And last thing before we took him back to base? 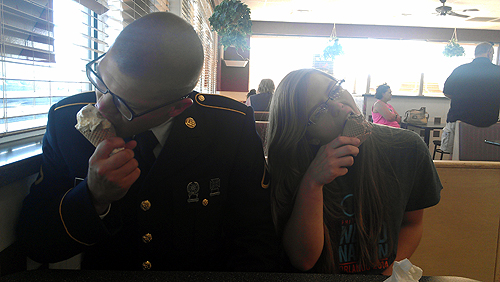 He got his ice cream. 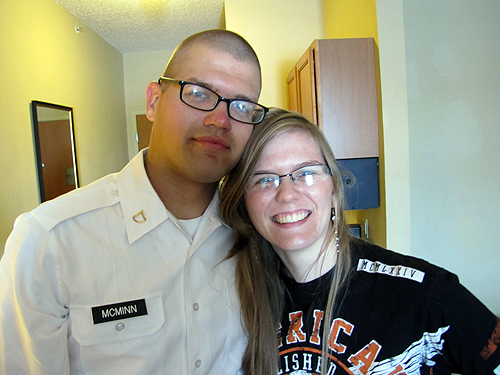 We have a soldier!