Dateline: Friday, May 8, 2009, Charleston, WV. The Kanawha River flows innocently on one side of a stately tree-lined boulevard. On the other side, within the garage of a quiet, unassuming state employee, a bed stands dressed and ready for its central role in a complex undercover plot. 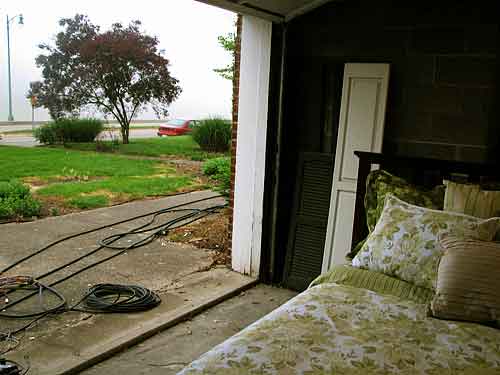 I arrived at the Batcave at 6:15, just moments ahead of the superhero. 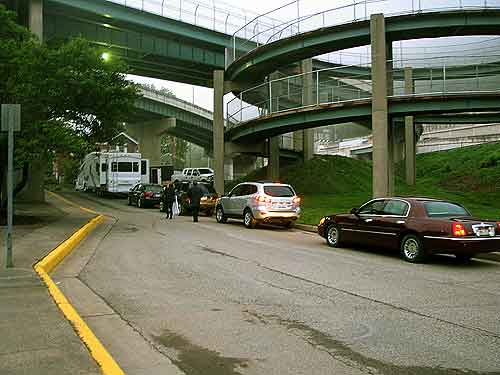 He arrived in a burgundy sedan and was immediately whisked into one of a couple of hidden trailers…. 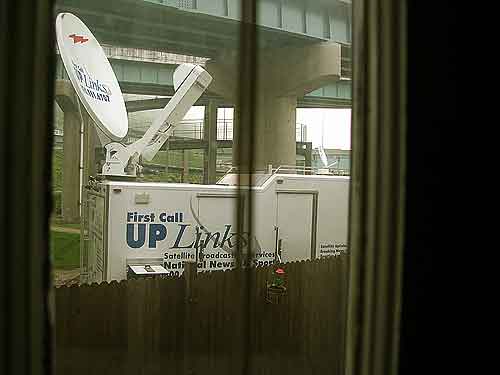 …where he transformed from ordinary mortal into…. 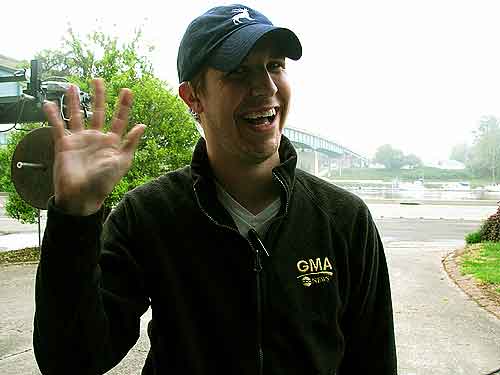 Oh, wait, that’s Anthony, the adorable little Good Morning America boy who seemed to always be ten places at once if he wasn’t waving the crowd into a frenzy or hopping over porch walls.

Or directing The Bed….. 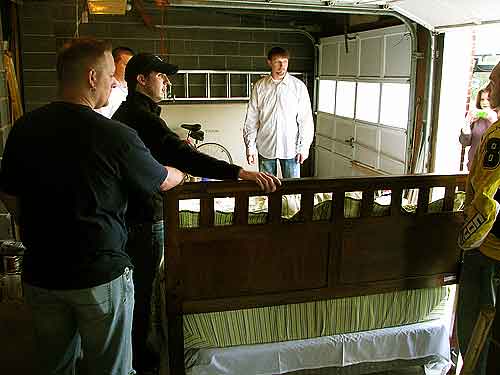 The bed was set up in this garage on Thursday. A team from GMA was in Charleston for several days in advance making arrangements for delivery, setup, and dressing of the bed as well as other matters involved in scoping out and preparing the location for Emeril Lagasse’s “Mother’s Day Breakfast in Bed” segment. The lucky woman was Susie Bratt of Charleston. The lucky neighbor and co-conspirator-with-his-next-door-garage, Don, invited me along for the behind-the-scenes ride and a chance to meet Emeril.

(As Don, who is close to the family, told me why Susie Bratt was chosen, he choked up. Read Susie Bratt’s touching story here.)

It was a cloudy, misty morning, with rain in the forecast. We’ve had nothing but rain for weeks, not to mention flooding. The cameramen kept checking the weather on their iPhones in between fiddling with their equipment.

We asked if they had a backup plan in case it rained. They said no.

But that wasn’t their only problem leading up to the 8:05 launch of the segment.

At 7:15, the city tree-trimmers parked in front of Susie Bratt’s house. 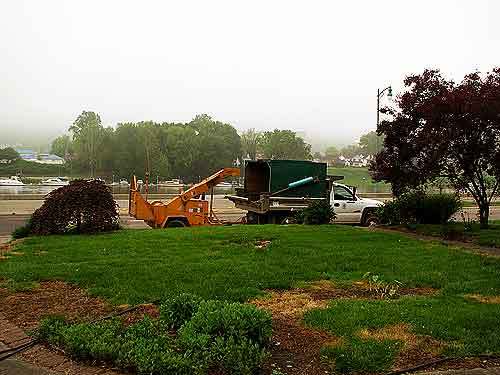 The crew sent Don to dispense with them. (They didn’t want anyone from outside the neighborhood to walk out on the street in case she looked out the window.) They told Don no problem, they were just going to cut some trees down by the river and run the chipper–in front of Susie Bratt’s house.

An ABC secret agent Man-In-A-Suit took the risk and headed across the street to fire upon them with his laser vision, bringing them quickly heading back to their truck. 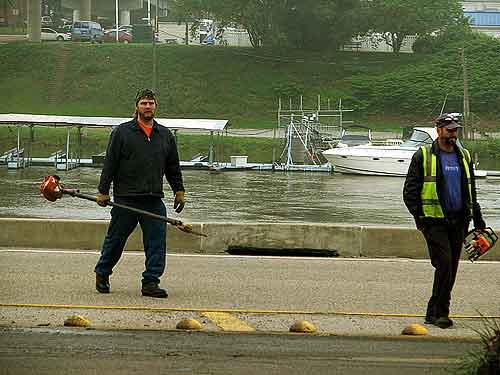 At 7:30, the city dog-catcher showed up. And parked in front of Susie Bratt’s house. 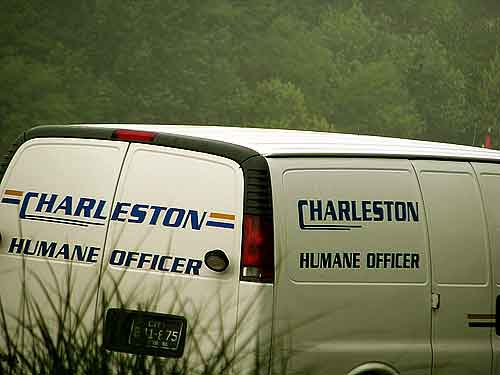 ABC Man-In-A-Suit ran them off, too.

Meanwhile, a horde of people gathered under the bridge on the other side of Don’s house. A horde of people as in like 100 people. Between the 100 people, the gawkers on the road, the huge equipment, the satellite truck, Emeril’s trailer, the tree-trimmers, the dog-catcher, and a number of local media representatives not to mention the mayor of Charleston, if Susie Bratt hadn’t looked out her window yet, it was going to be a miracle.

The 100 people included family, friends, a marching band, and cheerleaders. As the moment drew closer, they fetched “Grandma” in advance for fear she’d be trampled in the last-minute stampede to the front of the Bratts’ house. 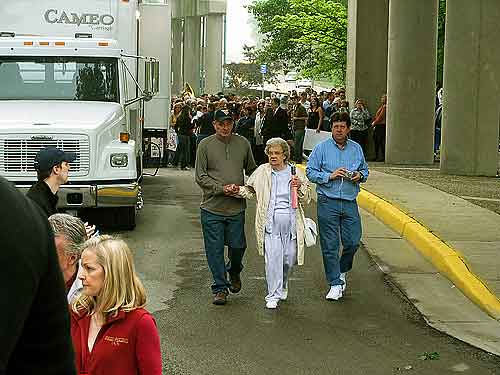 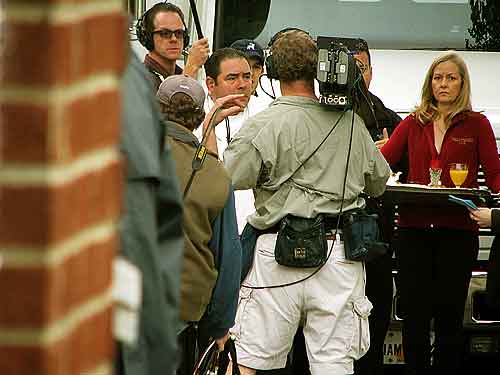 That poor lady, she held that tray for I don’t know how long. It was a long time after that before they gave the food to Susie Bratt.

I parked myself on Don’s porch for a view to next door. This is truly a lovely boulevard, just blocks down from the Capitol Complex and the governor’s mansion, with the Kanawha River running alongside. (Charleston is a beautiful city.) 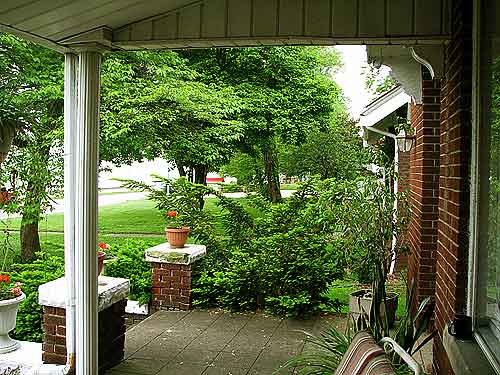 Emeril came “creeping” toward the Bratts’ house just before 8:05. 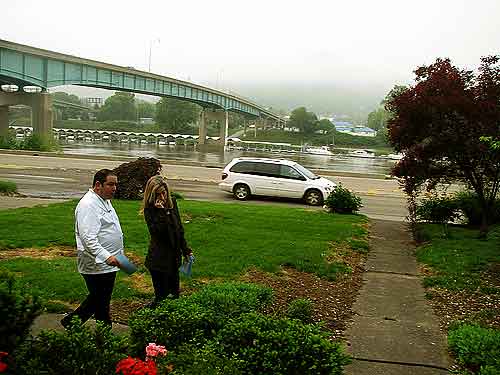 They showed a clip on GMA with Emeril actually creeping alongside bushes. That was filmed at 6:40 on the side of Don’s house. At the actual moment Emeril approached the Bratts’ house, he just ambled on over.

The ABC producer girl was constantly on the phone, communicating with her people in New York. 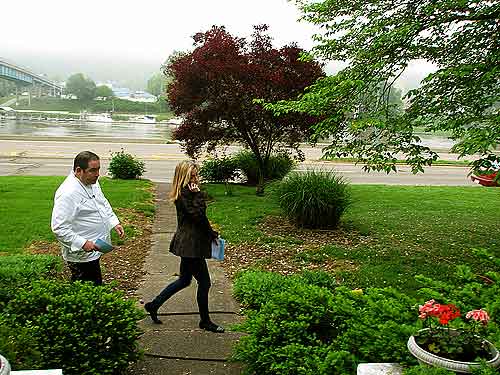 Once in front of the house, Emeril spoke to the cameras again…… 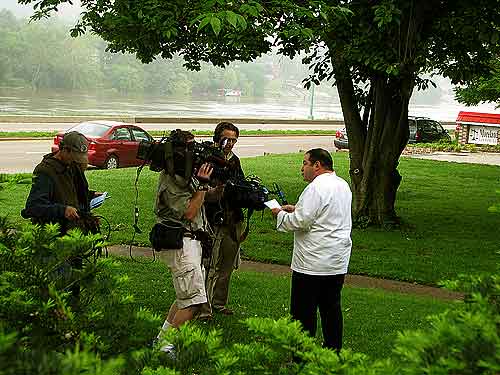 …..while, no kidding, ABC people swooped in and moved every single thing off the Bratts’ porch, down to the last watering can. 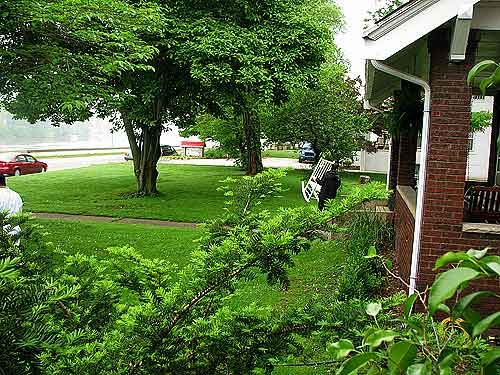 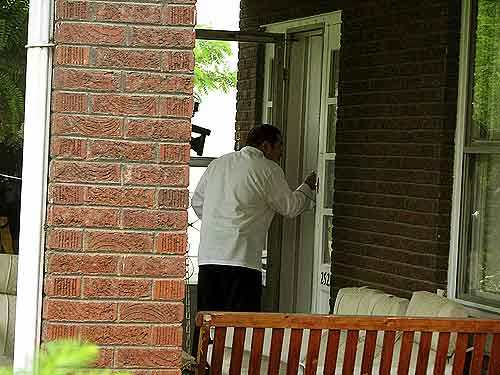 And whoosh, once Emeril was inside, Anthony had his boys choreographed with The Bed, racing it across Don’s front lawn to the Bratts’. 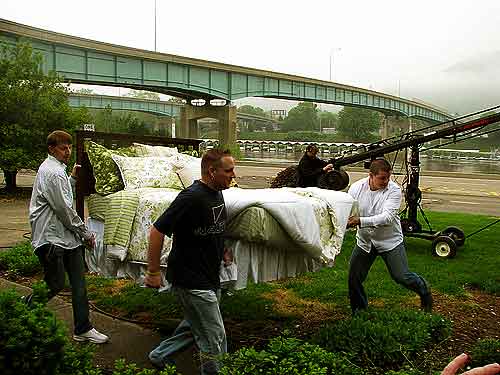 The Bed reached its final destination. Whew. I can’t imagine what people driving down the boulevard were thinking at this point. 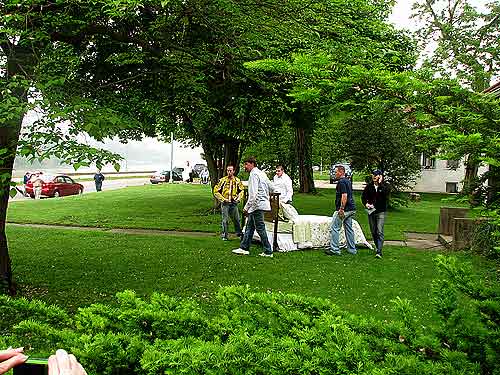 And then came The Horde. 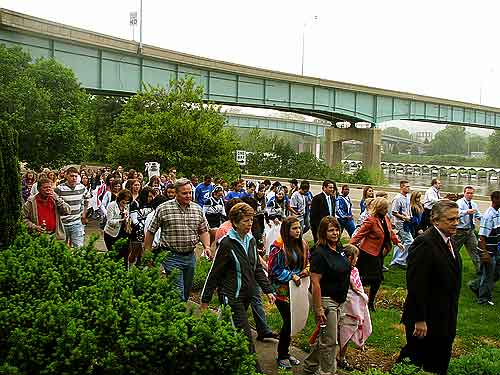 Emeril and Susie came back out of the house. The pictures of Emeril with Susie speak for themselves. 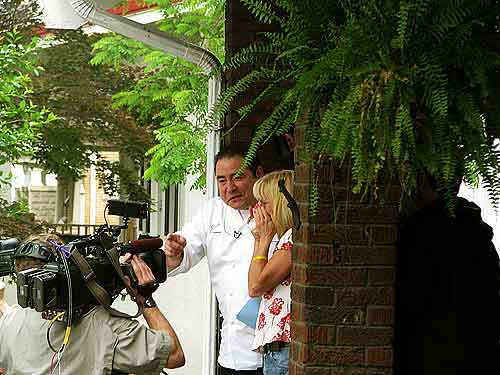 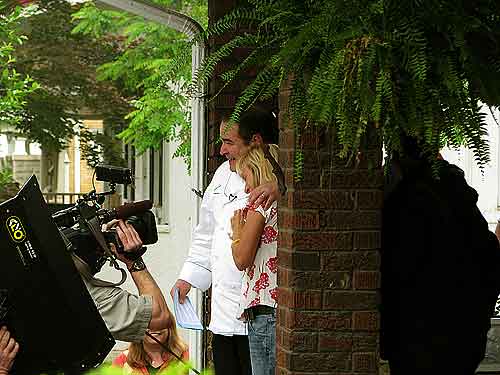 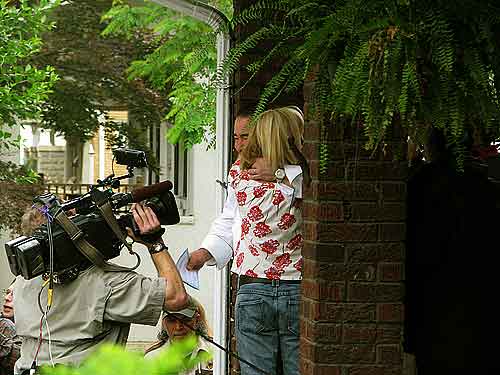 At this point, Emeril brought Susie down and she leaped on the bed (seriously, she leaped) and Emeril said BAM! and served her the food. I actually ducked inside Don’s house and watched it on TV because The Horde blocked my ability to see. 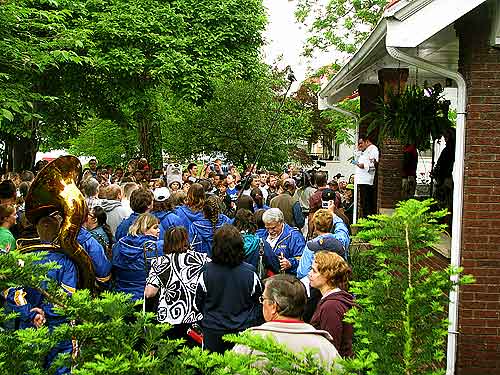 I could see better on TV.

This is kind and gracious neighbor Don (to the right of Emeril), who let the ABC crew run rampant on his property and take over his garage in the lead-up to the taping. 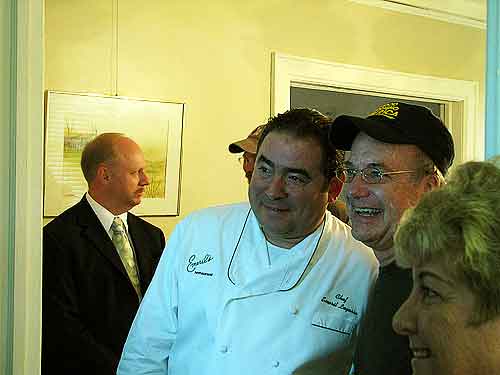 It was a ton of fun being there and watching the whole “surprise” taping of a massive nationwide television show in the circus atmosphere of 100 family and friends, huge trailers and equipment, clueless city workers, and The (ridiculous) Bed. And yes, I did get to meet Emeril after it was all over. He said, “I love Chickens in the Road! I read it every day!”

I’m so making that up.

There was really just one thing wrong with the whole event. 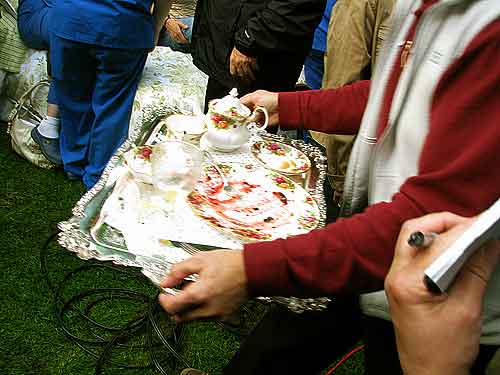 Did they seriously not save me any????