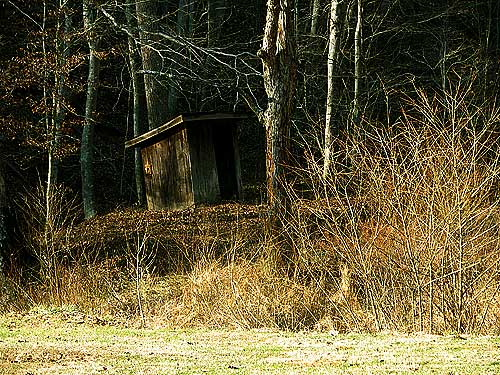 Above: A sneak outhouse peek. Come back tomorrow for the latest installment in my ongoing and intrepid pursuit of the Pulitzer Prize in investigative journalism as I unearth the hidden scandals and secret stories of abandoned outhouses…. I found a new one! See all my outhouse stories here.

When I was a kid, I liked to read the “Brenda Starr” comic strip. Not only was she glamorous and adventurous, she was a writer. I wanted to be a writer. I wanted to go to London after college, rent a flat, drive a mini, and have glamorous adventures including men who were tall, dark, and dangerous. (I’d been reading a lot of Harlequin Romances.) So, absolutely none of that happened, but I did get a degree in English and I got my first job as a professional writer–fresh out of college–as the lifestyles editor for a small-town Texas newspaper. My salary was $13,000/year. The girl who had the job before me quit to work the counter at a local drycleaners. She was tired of running around town taking pictures of people’s giant vegetables(!) and writing up garden club reports and obituaries. The drycleaners paid almost as much and it wasn’t busy. She got to read a book a day sitting at the counter.

Lifestyles editor was a glorified title, of course. I did write feature articles and a lifestyles column, but I was also responsible for a plethora of little things from the garden club and the library calendar to wedding, death, and birth announcements. I even pasted up my own section and took the boards to the print room. (I’m sure all this layout is done on computers now.) It was a V.I.P. small town paper–we had our own printing press. The job wasn’t called lifestyles editor when I got there. The position was writer. There was a guy who did the sports section and his byline read sports editor. One day I said to the head honcho editor, hey, the person who does the man stuff gets called sports editor, and the person who does the woman stuff gets called writer. What’s that about? He couldn’t come up with a good answer, or he just wanted to pat me on the head, so he told me I was hereby elevated to lifestyles editor. The title didn’t come up with a raise, only some sense of satisfaction. I was fresh out of college, remember–I still thought life was supposed to be fair. (The sports editor probably got paid more, too, but I didn’t have that information at my disposal.)

So I whipped up garden club reports and birth announcements and took pictures of giant zucchini, and wrote feature articles–my favorite part!–until my first child was born then I quit to work from home. I started writing books, and for a few years also wrote freelance features until I had three babies and couldn’t see straight much less write a cohesive article on a regular basis. So, all of this is to say–I have missed newspaper writing! And I’m glad to be back. Writing for a newspaper is fun. There’s always something different to do and new people to meet.

And, of course, it’s very glamorous and adventurous.

My first column comes out today in the Charleston Daily Mail. It will also appear online, and as soon I have the link, I’ll post it here, so check back!

Also, I’ll be writing a couple of freelance feature articles a month for the newspaper. In my blog and in my column, I tell my country living stories. My freelance features will be an opportunity for me to tell yours. I’ll be writing country living stories about people and places in the rural areas outside Charleston, West Virginia. So if you’ve got a great idea for a story in Minnesota, I can’t do that. If you’ve got a hot tip around here, though, click the Contact button in the menu bar above and let me know about it.

Especially if it’s glamorous and adventurous! And intrepid. I love to be intrepid! 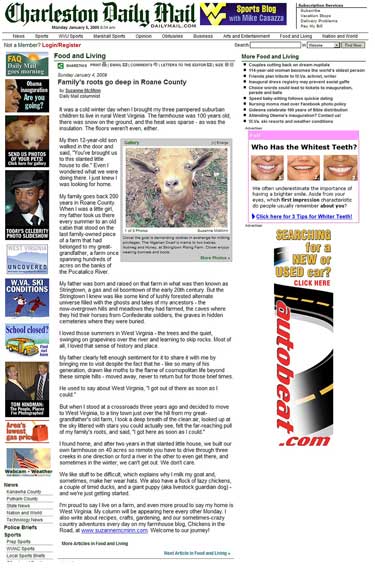