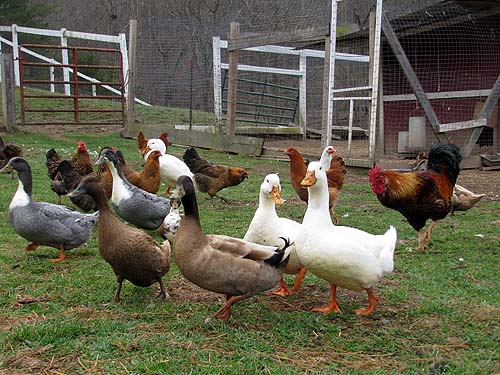 Whenever I order chicks from the hatchery, they send a free “exotic” chick. You can say no to the free chick, which I try to tell myself I should do but I never listen to me because who can turn down a free chick? Yet I know the chick is always going to be a rooster, because you know those are the ones where they end up with extras and they’re just using the free chick gimmick as handy baby roo dumping. I ordered a batch of chicks (and ducklings) last October and this is one free roo dump I’m really enjoying. 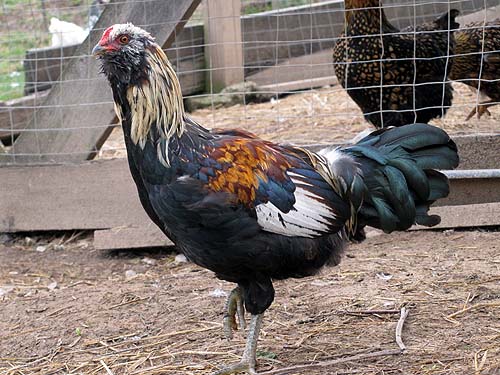 Took me a while to figure this bad boy out, but he’s a Salmon Faverolle rooster. 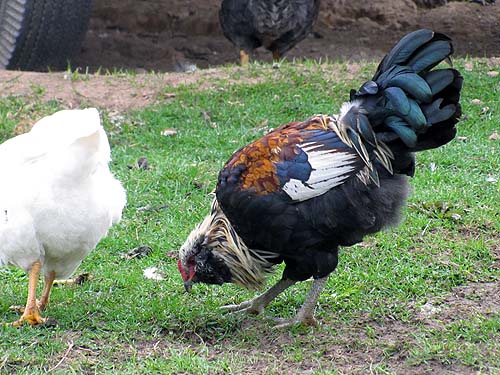 What a gorgeous rooster! I love him. I love him so much I’m going to get some Salmon Faverolle girls to go with him. Not that there aren’t plenty of other girls to go around. 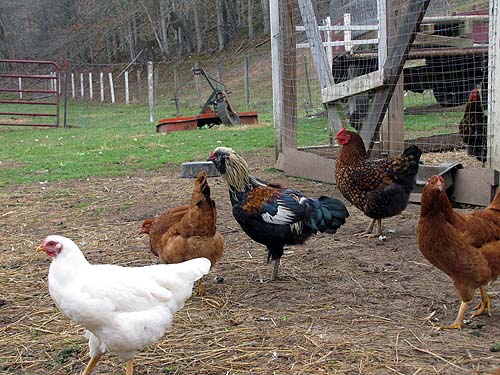 One of my favorite new-to-me breeds is Speckled Sussex. This is such a pretty hen. 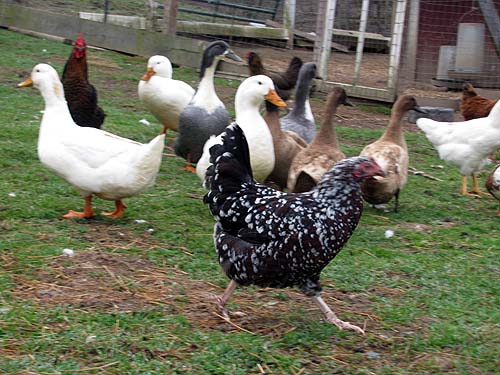 She lives up to her speckled name. 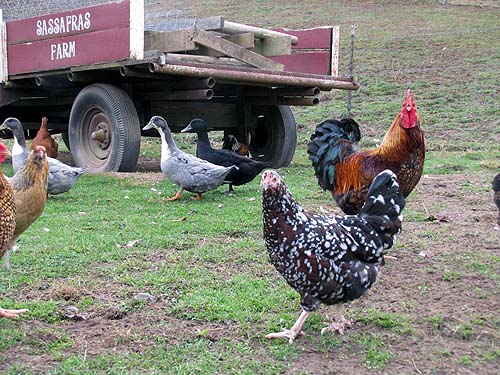 Another beauty is this Silver Spangled Hamburg. 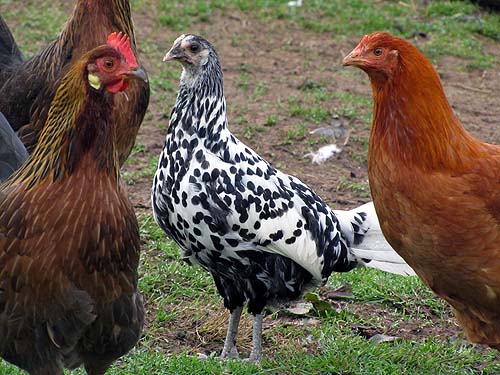 These are on the small size, but they’re not bantams. They’re just a standard size lightweight breed. 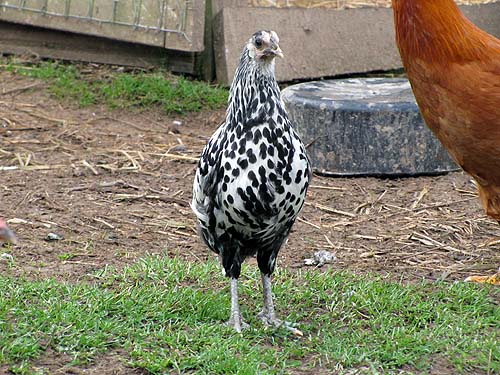 Here she is behind one of my Golden Laced Wyandottes. 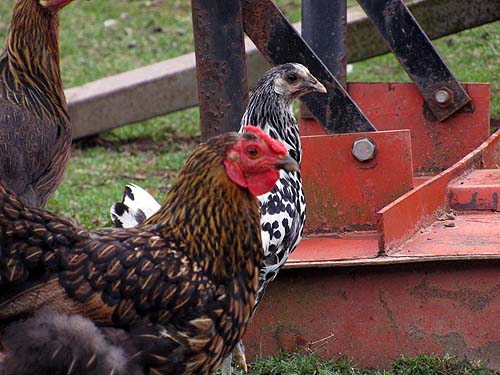 The only rooster I have right now (besides the young Salmon Faverolle) is my Golden Laced Wyandotte rooster. 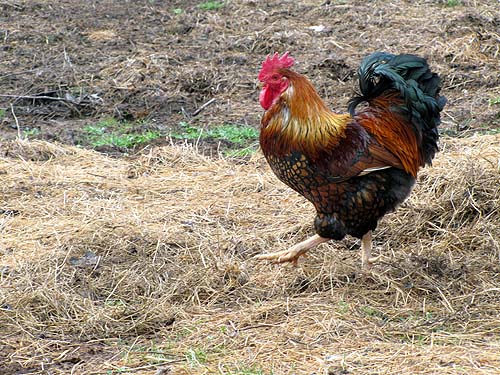 He’s a pretty boy. I’m thinking about grabbing him and a couple of the Golden Laced Wyandotte girls and shutting them up in a barn stall to lay some babies for me. 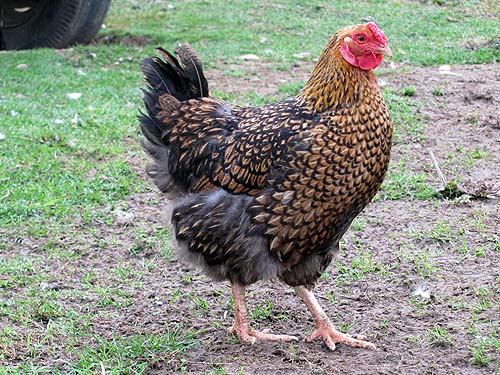 First I have to accomplish catching them…. Meanwhile, here are some of the new ducks I got last fall, all grown up. 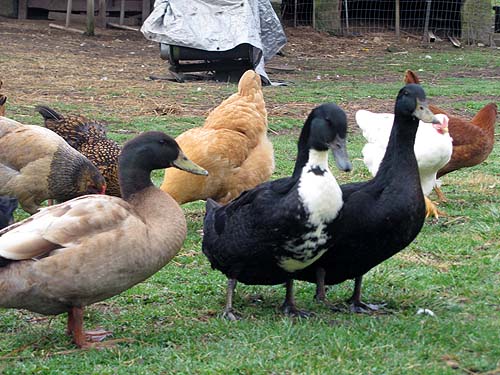 I had some Pekins, Khaki Campbells, and Blue Swedish already. 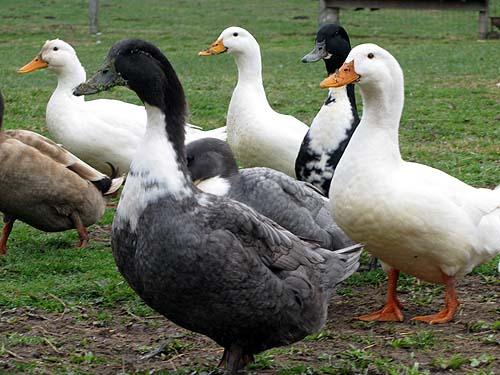 I wanted more Blue Swedish, but I also wanted some Black Swedish (they’re the ones with the white fronts, just like the Blue Swedish only black) and Cayugas (all black).

I think I have enough ducks. I better stop. 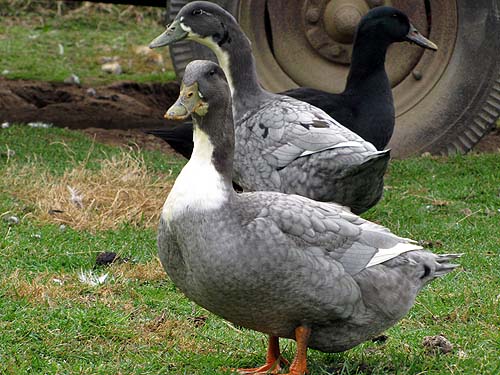 The ducks went layin’-crazy in February when it was oddly warm. Ducks lay quite a bit first thing in the spring, then they lay off (literally) after that until fall when they go through another brief laying spurt, so they’re not quite as dependable for eggs as chickens, who will lay virtually year-round except for molting and winter–though if you have enough chickens, some of them are always laying at some point even when the others quit. They take turns better than ducks. The ducks are all at it, then they all quit. 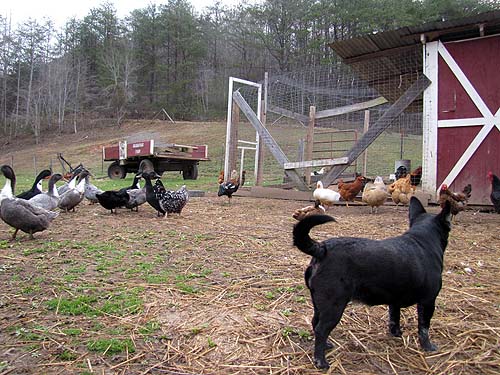 I’ve found people can have some really strong opinions about duck eggs. They either love ’em or they hate ’em. (Not Pepper–she loves them all.) Duck eggs are huge. I use special jumbo cartons. 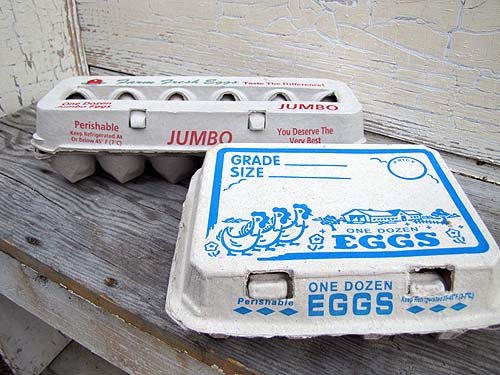 Chicken eggs are in the cute little vintage-style carton, duck eggs in the jumbo. 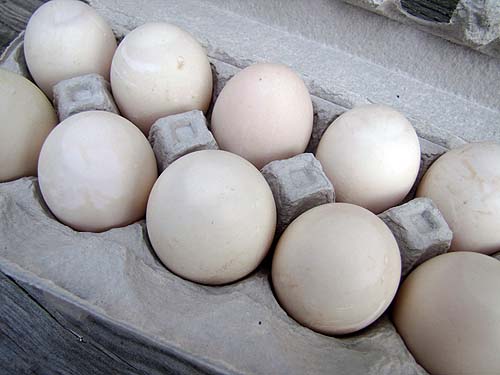 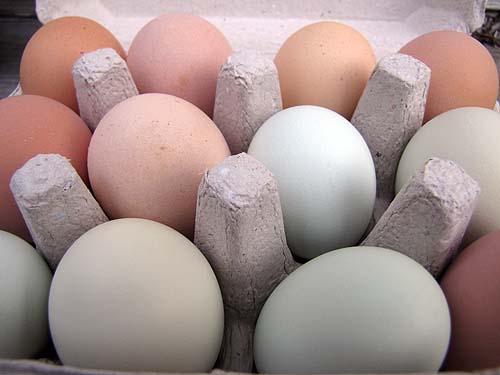 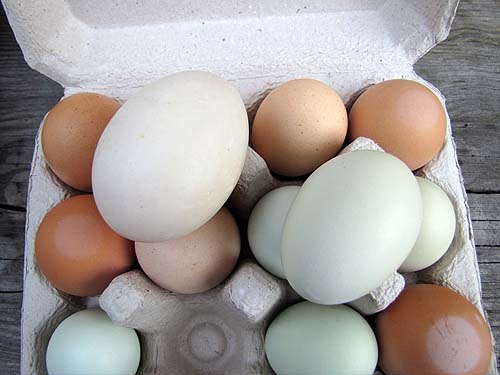 They look different inside, too. Cracked open–chicken egg on the left, duck egg on the right: 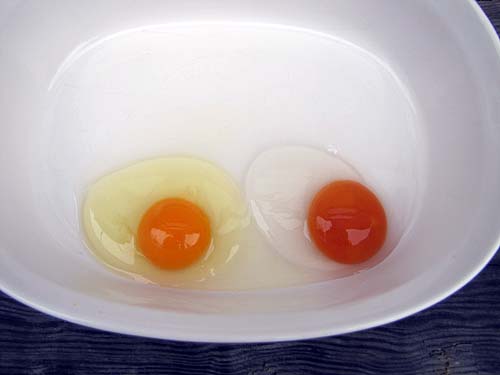 Notice that the duck egg white is, well, whiter.

Duck eggs are richer and sturdier than chicken eggs, and a brighter, deeper orange in the yolk. Store eggs, for example, are more of a yellowy color in the yolk. They’re old eggs, plus it’s how the chickens are fed in confinement. Fresh chicken eggs have a brighter yellow-orange yolk. But duck egg yolks are a really bright, deep orange, even more so than fresh chicken eggs. The yolks are sturdier meaning if you want to break up the yolk, it’s not like you need a steak knife, but there’s a different feeling to it, they just resist breaking more than a chicken egg does. And they’re very rich, so they’re great for baking. I also just like to eat them, fried in a pan. And they’re bigger, of course. But, you use them just like chicken eggs, so not like a huge difference, these are just small but noticeable differences between them and a chicken egg. There’s not a huge difference in taste (to me!), but there’s a small difference, from the richness. I love duck eggs.

Many people do notice a difference in taste to them, though, and some people find duck eggs offensive. Maybe they have a slightly stronger taste. Maybe I’m just used to them and don’t notice. Duck eggs do have more fat, protein, and Omega-3 fatty acids than chicken eggs, and sometime people who are allergic to chicken eggs can eat duck eggs. And sometimes it’s the other way around, too!

And then there are people who are just grossed out by the idea of eating a duck egg because it sounds kind of foreign and weird, like you suggested they try some fried bat.

Me, I’m always sad when “duck egg season” is over in the spring. When it turned cold again in March, the ducks cut back on the laying, but I’m hoping they’ll have another burst before they’re done for the spring. 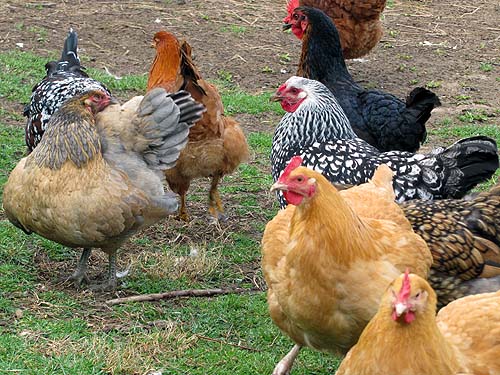 More of the young hens: Single Comb Brown Leghorn on the left, Buff Orpington on the right.

Then it’s back to the chickens for year-round duty. 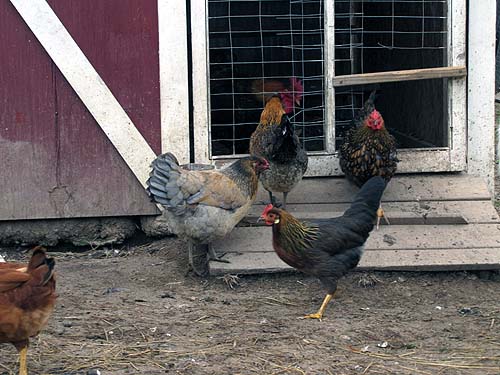