Bradley the bull has gone bye-bye. 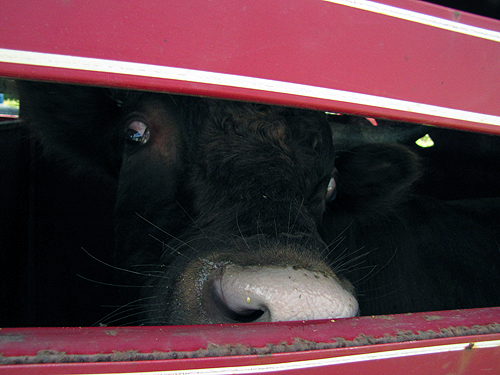 The separating and loading went quicker than I expected, but it still wasn’t easy. The owner of the bull backed his truck and trailer into the access road behind the back barnyard. The cows were all in the back barnyard. The gate was opened and the bull guy used a bucket of feed to convince the bull to come out into the access road while the girls were blocked from following him. Once he was in the access road, he was herded in the appropriate direction and all went swimmingly for a few minutes until he decided to turn around. I was down by the trailer to block the open space next to one side of the trailer. I threw some feed over the fence to the girls, causing them to run down the field. This convinced the bull to run down the access road alongside them (separated by the fence) toward the trailer. At this point I was worried he was going to keep going along the side of the trailer and mow me down, but luckily he was diverted by his owner’s feed bucket to go right behind the trailer. He was eventually convinced to step on, and the job was all done in about 10 minutes. 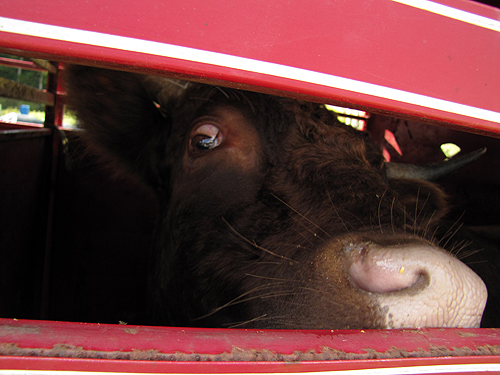 I don’t think Bradley was too pleased to discover himself locked into the trailer, but it’s part of his job. Even if you love your job–and surely Bradley has to love his–there are always parts of it Not to like, and I suppose riding around in trailers is one of those for Bradley. He left behind three mothers-to-be, and a job well done. Bye, daddy. 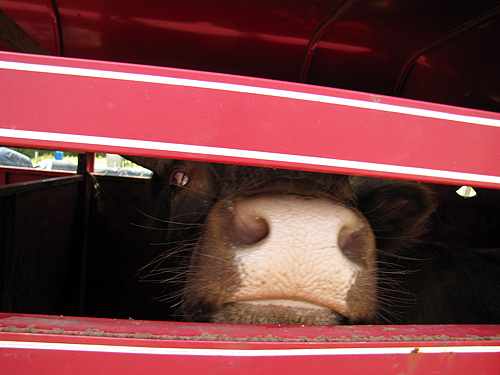 Now we wait. Cows are pregnant for the same amount of time as people. The bull was here a full three months, and I think they were all bred in the first month, in the order of Moon Pie then Dumplin then Glory Bee. Calves should start arriving about a week apart, with the first one sometime around mid-April.

And then there will suddenly be six cows on the farm. That is, like, a little herd!

Cows are central figures on a farm. They provide milk, butter, cheese, and beef. They are the family farm machine, all wrapped up in one. Throw in some chickens, and you’ve got almost all you need along with a garden and some fire wood. A family cow used to be called a house cow. Back in medieval times, the cow was so important, it would actually be kept inside the house in the winter. You don’t want your cow getting cold! It was not that many generations ago that brides brought milk cows with them to their new homes as their dowries, and that families kept cows in their small yards in the cities. Most of us can probably look back to either our parents or our grandparents who were raised with a family cow, and yet in such a short time span, our collective knowledge has disintegrated to the point that you can ask kids where milk comes from and their most likely response will be–the store. Because of the workshops I do here, a lot of people come through my farm. Even adults ask questions like, does a cow have to have a baby to make milk? And does a hen have to be with a rooster before they lay eggs? (Just to make that confusing, the answers are contrarily opposite! A cow has to have a baby–and have been with a bull, of course–in order to have milk, but a hen lays eggs whether she’s ever met a rooster in her life or not.) And those aren’t stupid questions–there are no stupid questions, the search for knowledge is the epitome of wisdom–but it is demonstrative of how distanced we are from our food sources today.

The family cow is growing in popularity again, though. Not because we can’t survive without it, as was the case in the old days, but because we choose it, as a lifestyle. And it’s not a lifestyle everyone can take on, but it’s a very rewarding one if you can. Like chickens, cows are grounding. They put your life on their time, cow time. Whether it’s the big cycle of the year from breeding to calving to milking, or the daily care and tending of feeding or moving them between pastures, or the tiny moments–the sound of mooing in the morning or the feel of full warm teats beneath your fingers, life with a cow is about the cow. Moments, days, weeks, months, and years are measured in cow time. Milking time, feeding time, hay time, bull time, calving time.

I love cow time, and I am gonna love next spring. Three calves. I can hardly wait!