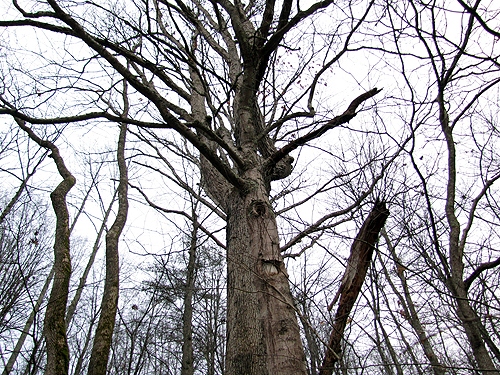 The two-week buck season in West Virginia is over now and my current obsession is squirrel hunting. Around here, the people I’ve talked to who go squirrel hunting use either a shotgun or a .22. Ammo for a .22 long rifle is getting hard to find. I’ve tried using both my .22 and a 20 gauge and have had no luck so far, but I’ve only tried a couple times. Squirrel season runs until the end of January, though, so I have lots of time left! There is another doe season at the end of December, so I’ll be attempting to shoot a deer again then, but so far, based on my hunting endeavors overall, the creatures of the woodlands have no need to fear.

I’ve tried for two years now to shoot a deer with no success. I’m inexperienced, of course, and also tend to get caught up cooking over Thanksgiving week with my kids here and don’t get out as much as I want to. It’s a challenge, and I’ll keep trying. I have now gotten to skin, gut, and butcher several deer–between family and neighbors letting me practice and learn on what they’ve shot. (If someone tells me they’ve shot a deer, the first words out of my mouth are CAN I GUT IT?) I’ve learned to hang deer. I’ve learned to skin and gut them. I even gutted, skinned, and quartered a deer in the woods, and I did one, entirely–from skinning and gutting to butchering, with nothing but my pocket knife. Then I went to Cabela’s and bought a proper set of hunting knives. Because doing the whole thing with a pocket knife was kind of ridiculous!

One of these days, I’m going to finally shoot my own deer, so all this skinning and gutting and quartering practice is so that when that day comes, if I’m alone, I’ll know how to handle the deer. It’s what to do with the deer after that seemed the most difficult to me. I can always try until I eventually manage to shoot one, but I need to know what to do with it afterward in case I’m alone. I feel pretty confident about that now, and I really love that sense of confidence. Occasionally, I do butcher a goat–but I’ve always taken them to a processor. (Same with deer–we’ve always taken them up to the high school for processing in past years.) I love having the knowledge to process my own meat. I’ve always liked the idea of raising my own meat, but to know I can process it myself, too, is an amazing thing. Despite my lack of actual success in bagging game so far, the past year or two of educating myself about firearms and hunting and processing has been a huge confidence boost, and it presents an ongoing challenge that I really enjoy. To me, it represents that next step in learning how to be self-sufficient.

I wish I’d learned more about hunting when I was a kid. My dad took my brothers hunting, but never his daughters. Those were the days when life was a little more sexist. But it’s never too late to learn! And so, in the midst of all my deer hunting efforts, I got to thinking…. How do most people start hunting? Often, as kids, and that often means squirrel hunting or other small game (such as rabbit). They’re plentiful and the season goes on for months. This offers more opportunity to learn to hunt and to practice processing an animal. People don’t talk about squirrel hunting as much as about deer hunting, it seems. Deer hunting is like the big excitement! But since I’ve gotten interested in squirrel hunting and started bringing it up around men–hired men, neighbors–I’ve learned that quite a few men do squirrel hunt, not just as kids but as grown men. (I’ve yet to meet a woman around here who squirrel hunts, but I’m sure they’re out there! But I tend to talk to more men than women anyway.)

So, these days, I’m like a kid, learning to hunt, and working on my squirrel skills. I’ve watched all kinds of squirrel hunting videos. I talk to every man I meet about squirrel hunting–what kind of gun do they use, and if they use a shotgun, what kind of ammo. Some people will only use a .22, but a lot of people also use a 12 or 20 gauge and find that easier even if you have to pick out the lead shot. (And as I mentioned earlier, .22 ammo is actually a problem to find anymore.) And did you know they make squirrel calls? I’m going to get one and try it out. And, of course, I’ve been inhaling squirrel recipes. I’ve eaten squirrel before, and like it. I just watched a video with a squirrel fricassee recipe this morning and it looked delicious!

I’m going to get a squirrel. Soon. I’m determined. Do you squirrel hunt? If you do, tell me about it! I’m obsessed.