Getting three cows bred this summer means there will be three calves (hopefully!) in the spring. I’m planning to keep girls–I want more breeders. If there’s just one bull calf, I want to keep that, too, for future beef. It will be turned into a steer. But if there’s more than one boy, it’s going to mean taking it to the sale. With that in mind, I was curious to start researching and learning more about it, so on Saturday, we took a trip to the livestock auction in Ripley, which is about an hour away. We arrived in my Impala, and we didn’t exactly fit in with everything else in the parking lot. 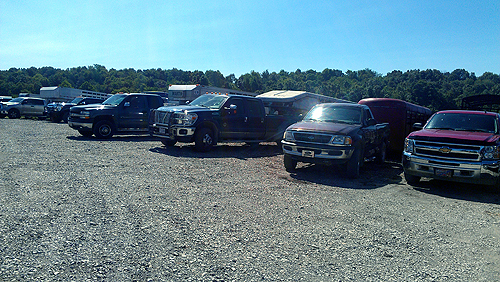 Everybody probably thought we were city slickers. 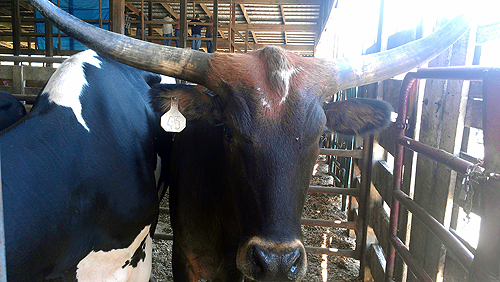 I thought this bull was the prettiest cow at the auction. He might have been some kind of mix, but he had a Jersey-like face. I’ve never been to a livestock auction before, so I was excited. We strolled along the catwalks looking down at the animals. 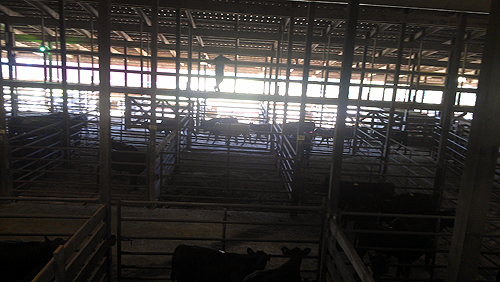 I forgot to bring my camera (WHAT?!) so I didn’t take as many pictures as I would have liked since I only had my cell phone for photos. 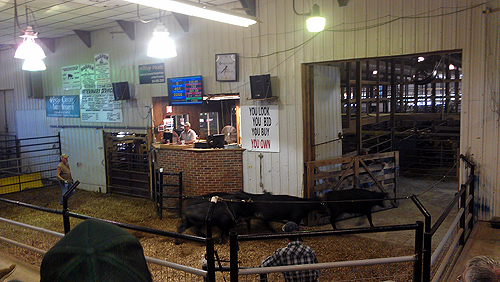 But. Here’s what I learned from the day. First, cow dogs are really cool. I’m not sure what breed the dogs were (Corgis? maybe) but they clearly loved their job chasing the cows out of the arena and back to the pens. Second, auctions are confusing and it’s hard to tell who is bidding, but the auctioneer obviously knows. Some people bid just by a nod or lifting a finger. (I did see one bidder give another bidder The Finger, which was entertaining.) And most of all, that prices were in the reverse order I expected. The younger calves, 300-500 pounds, were going for $2-3/pound, while the older calves and on up to grown cows were going for $1-2/pound. This is a generalization because some cows went for more or less, but. That was the basic lesson. You can grow a calf longer, so it has more weight, but the sale price per pound goes down. If you’re over-wintering them and buying hay, it’s not worth it. If I sell a calf next year, I’ll sell it before hay time.

They were selling out a man’s entire farm–he’d been injured and apparently couldn’t farm anymore–so there were a lot of cows from one farm, mostly black Angus. And, of course, other cows from other farms, and still mostly black Angus. But, there were Herefords and other assorted cows mixed in there, and the auctioneer never stated what breed any of the cows were, which I would have appreciated. There was one little bottle baby bull calf. He sold for $200 and if I’d even had a bid card, I would have been tempted to bid on him and take him home in the back of the Impala! 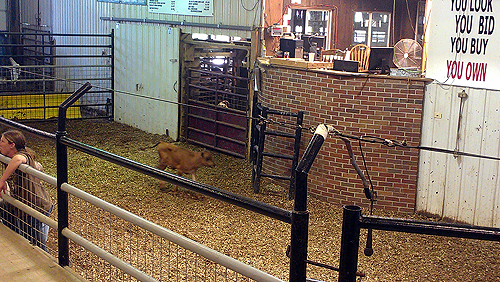 But I didn’t. (The above photo was taken during the intermission. They left the little bull calf running around the arena since he was next up after the break.)

We stayed for the entire auction. They went through all the young cows, then on to bouncing baby goats and sheep and one pretty pony and a couple of pigs, then back to cows. Bred cows, cow/calf pairs, bulls, steers, and then, sadly, the old girls.

They reminded me of BP. They wandered in, slowly, in no hurry for where they were headed, bony and limping, rode hard and put up wet. Some of them were beef girls, and several were Holsteins. All of them had udders nearly dragging the ground. They’d put in their time, had all the babies they could pop out, and now their future was in a hamburger package.

I’m glad I had BP and that she didn’t end up at a livestock auction at the end of her days.

I’m never taking an old girl to an auction.

At the same time, I realize I have a very small farm. And that in larger operations, that’s pretty much what has to be done.

But the next time I go to an auction, I’m not staying til the end when they bring out the old, tired girls.

Some days I’m not really cut out to be a farmer.