I’m alive! I missed you!

What we had here (as I think most of you will know by now) was a derecho–a super wind, also referred to as a straight line tornado. Winds blasted as high as 91 mph. (See more about what a derecho is here.) I’ve never seen anything like it. The storm came on suddenly, picking up and throwing heavy things off the porches, like my gas grill. 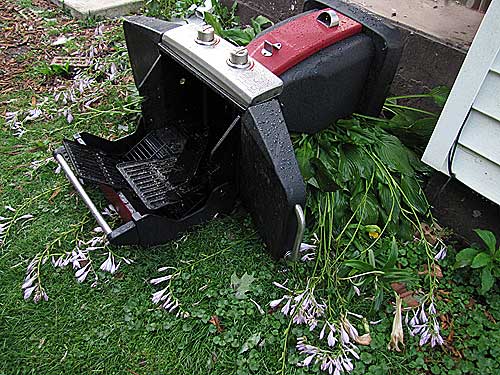 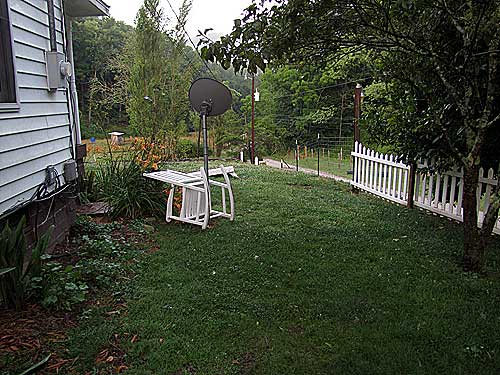 Stuff that doesn’t usually blow off a porch!

I had gone outside to watch the storm. I like to watch storms. But, uh, never mind. I ducked back inside, afraid I was going to be HIT by something. (Luckily, I had no major damage at my farm.)

The road in front of my farm: 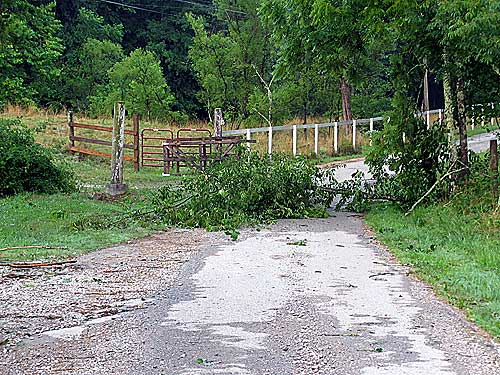 There were trees across roads everywhere, and power lines, too. Power lines that stayed in the roads for days. Few gas stations were open–few had power to pump gas, and those that did quickly ran out. There were lines at the gas stations that were pumping gas. Many of those couldn’t take anything but cash because their credit/debit machines weren’t working. Stoplights, even in the city, weren’t working. It was a crazy world out there, like the aftermath of a mini apocalypse. Eighty-five percent of the population of West Virginia was without power at the beginning, and as of the last I heard (yesterday) there were still nearly 200,000 homes in West Virginia without power. (On and off storms since then have put people out of power again who got power back. I’ve never gotten power back, period.)

I sent Weston to Spencer. There was power at his girlfriend’s house. I am so grateful for public water. I still have well water at the barn and all outdoor faucets. (Something to add to the list: Hook up at least ONE outdoor faucet to public water for extended power outages.) I tote bucket after bucket every single day to the animals. It’s a long, long way with bucket after bucket of water. I fill up 5-gallon buckets for the animals, but I’ll only carry a full 2-gallon bucket, so it’s back and forth and back and forth. (I learned a long time ago that if I wanted to be a farmer for a long time, I had to stop hurting my back. I work hard to be careful to not carry more than I can handle.) The cows have water in their creek, and Patriot and the donkeys have the spring in their pasture, so I carry to the sheep, the goat yard, and the barn yard. Then I tote buckets to water flowers, trying to save them. It’s an extensive daily process, exhausting and hot, but I am grateful with every bucketful that I have water because it’s so dry here. 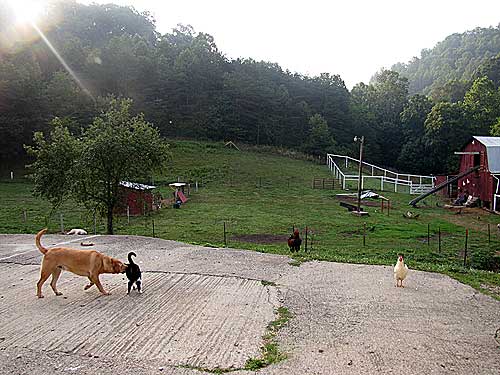 I shuttled off meat from my freezer to a friend who had power and a neighbor who had a generator, and other than that, let’s just say the chickens had a really good day the day I cleaned out the refrigerator. I now have practically no food, but the freezer, it looks so clean. I started out with a bag of ice that I had when the power went out. When that melted, it was early in the power outage days and there was no ice available anywhere. You couldn’t beg, borrow, or steal a bag of ice around here.

I didn’t have a generator. We had a generator at Stringtown Rising, but it wasn’t mine. I tried a number of times to pull-start that generator, but was never able to do it, so I knew when I got my own, a pull-start model would not be a good idea. A generator of my own has been on my to-do list, but an extended power outage in the summer hadn’t occurred to me. Our extended power outages here are in the winter. I’ve been preparing for winter for months–mostly for the animals. I was putting off my human winter preparation (such as a generator) until after I’d taken care of the animals’ needs.

But it’s pretty hot here. We’re having a heatwave. 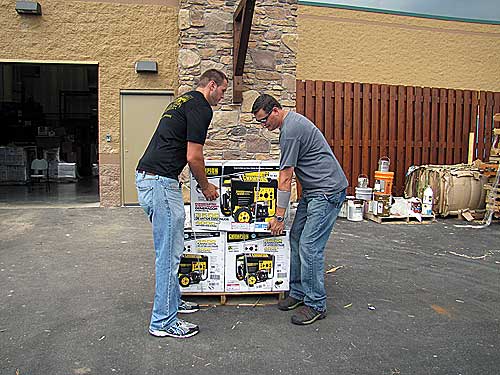 It’s been hard to find anything here–generators, power cords, you can almost forget it. And ice–ha. A new Cabela’s is opening in Charleston soon. They got in a couple trucks of generators and the city let them “open” on the sidewalk and sell generators right out of the truck.

This beautiful generator came home with me on Day Six, when I’d finally had enough. 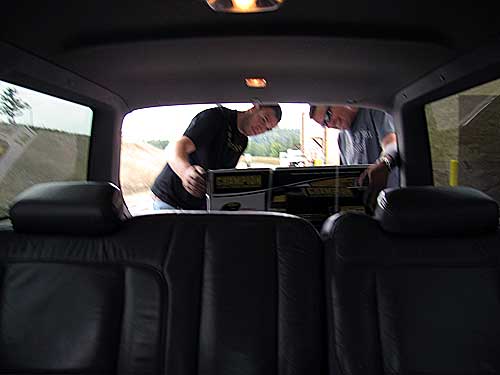 I’m camped out in the studio. 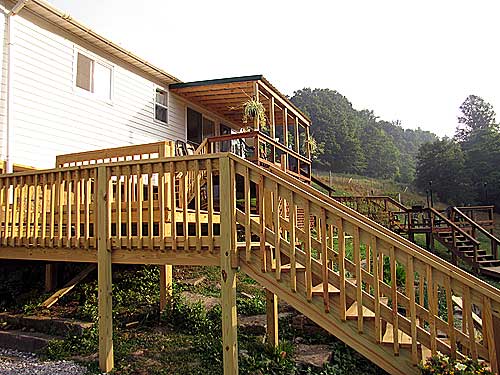 There is a window a/c unit here–my only source of air conditioning. I can’t run the central air in the house on the generator. In the studio, I have hot water (gas water heater, nothing on it requires electricity, and there is a shower in the studio bathroom), gas stoves, a TV, a refrigerator, and light. Yay! Life improved immensely after I brought home the generator. 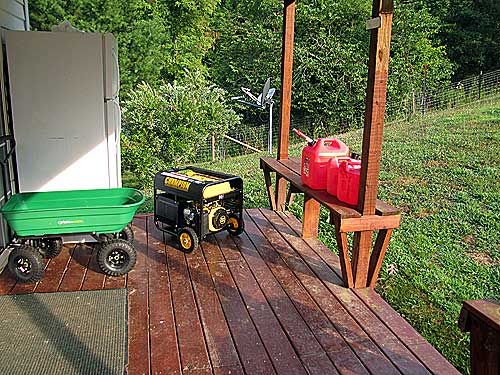 Best part of it? It has a push-button start!!!! 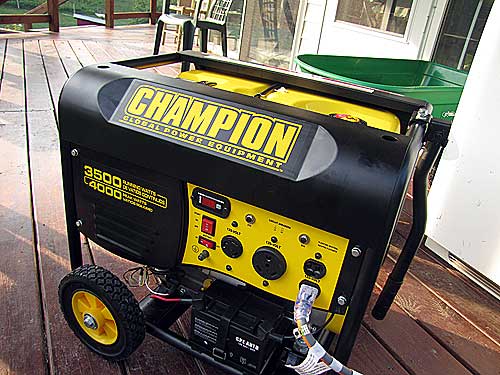 I picked up Morgan from the airport on Friday. Ross came home last night for the weekend. Weston came home today. Thinking ahead to winter preparation for PEOPLE now, Ross made a wiring alteration so that I can run the fan on my furnace in the house. I will be able to plug it in to my generator now and run heat in the house during a winter power outage. 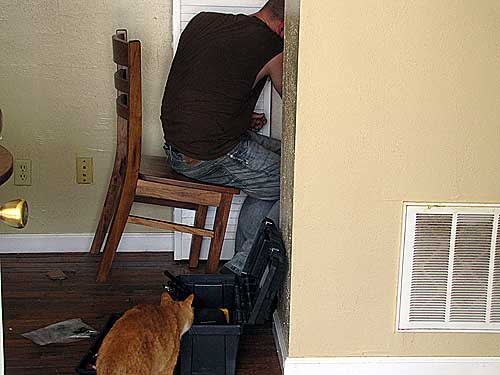 We’re sleeping on the floor in the studio. 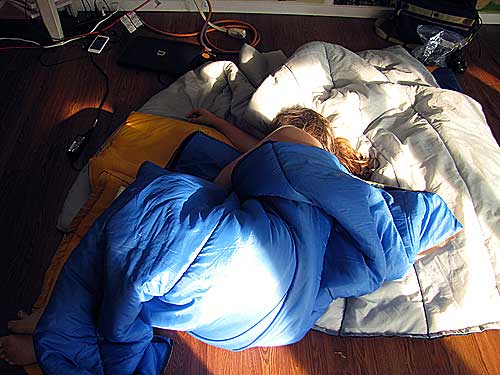 I pulled the mattress out of the loveseat sleeper sofa in the house and brought it over so this is my “studio” bed. 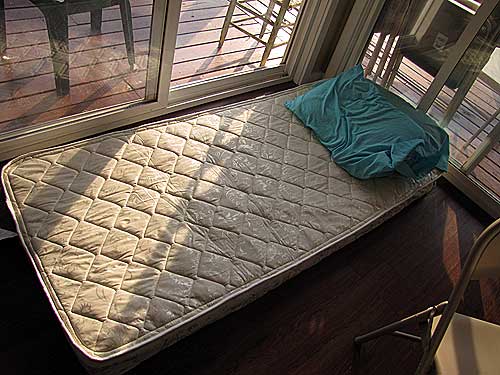 (Notice I didn’t even bother to bring a sheet.) 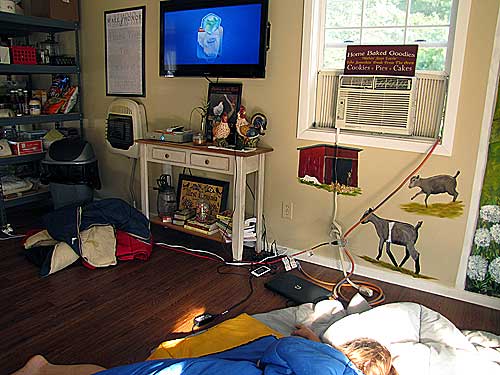 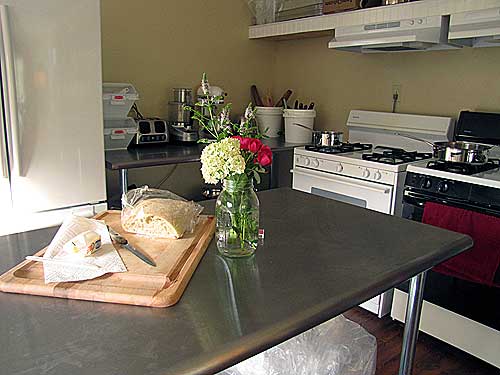 It was today before I put together the cords I needed to get the satellite internet box in the back upstairs bedroom in the house connected to the generator at the studio. You can’t buy heavy duty extension cords around here right now. I had to borrow. 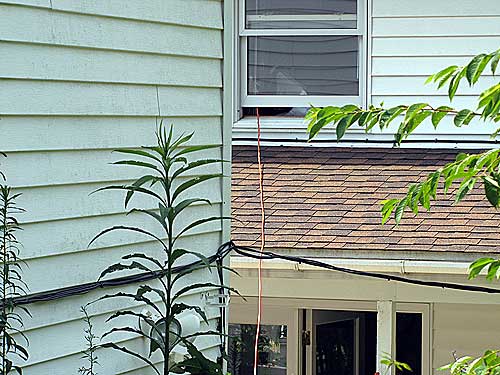 I change around what is hooked up to the generator, and I’m running a really long line to the satellite internet box and router, so I won’t leave that on all the time, but I wanted to get up a post to update you. Thank you for all the comments you left. I appreciate it!!! I will be back when I can. I don’t know when I’ll have normal electric power again. They say maybe Sunday night, but they are also starting to make noises about later, Tuesday or Wednesday.

Or, you know, never.

But we’re fine. In fact, under the circumstances, we’re doing more than fine. 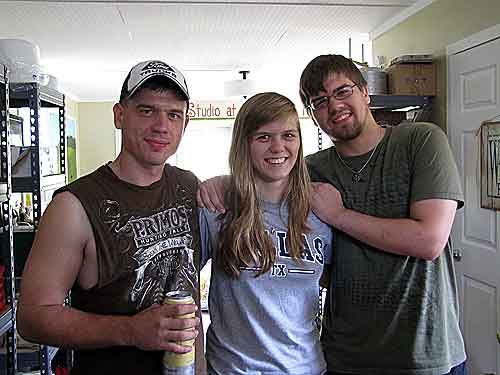 I have my three kids home, and we have enough generator power to be comfortable. I feel downright fortunate.