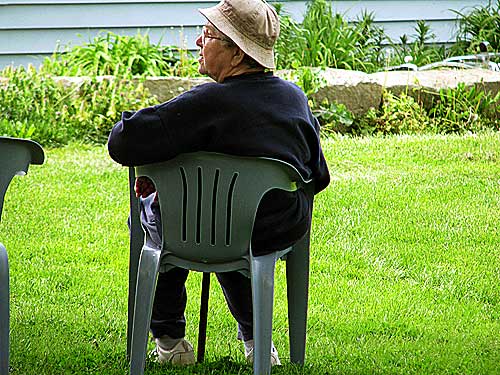 The obituary, written by my cousin, Mark Sergent.

Georgia Pauline Sergent, 84, of Johnson Creek, Walton, West Virginia passed away at home on September 28, 2014. She was born at Cass, Pocahontas County, West Virginia on February 7, 1930, a daughter of the late Robert Brooks and Esta Long Reed of Glenville.

Georgia graduated from Glenville High School, obtained a Bachelor’s Degree in Home Economics from Glenville State College and a Master’s Degree in Physical Education from the West Virginia University College of Graduate Studies. She was employed as a WVU Extension Home Demonstration Agent for several years and served in several counties when she met her future husband, the late Robert Sergent of Walton, then a fellow WVU 4-H agent. Robert and Georgia were married twice, once at Glenville and again at Jackson’s Mills Girls’ State 4-H Camp in the Formal Rose Garden. Robert later worked with the USDA Farmers Home Administration as a County Supervisor, covering over one half of West Virginia’s counties, The couple resided in Romney, Philippi, Moundsville, Elkview, Kingwood, Wayne and Winfield gaining many lifelong friends. Georgia enjoyed working with children and taught in the 1960’s at the Winfield Methodist Church-sponsored kindergarten.

Georgia and Robert retired to the Sergent family farm in 1978, joining the Methodist Class of the Walton Union Church. She was active in teaching Sunday school, youth ministries, and the Outreach Committee, making home visits to shut-ins. Georgia and Robert were blessed in traveling twice to the Holy Land. Georgia enjoyed gardening, cooking, canning and sewing. She shared her garden produce with the community, especially senior citizens. Robert and Georgia loved to operate their “Bed and Breakfast without the Breakfast” at the 100 year old family farmhouse for friends, relatives, and neighbors in need. She enjoyed local history and helped republish “Bishop’s History of Roane County” and helped publish the “Roane County West Virginia Family History Book”. She was a member and past president of the Roane County Friends of the Library and, along with the community, helped fund the building of the Walton Branch Library. Late in life, Georgia shared her farm and homemaking skills with cousin and author, Suzanne McMinn, and was cast as a romance novel character in “A Weekend Engagement” by McMinn. Georgia was a regular feature in McMinn’s “chickensintheroad.com” blog. Georgia was active in the 4-H program, the founding adult leader of the Winfield Scotts 4-H club, a WV 4-H All Star, and she lived by the All Star motto, “Service”.

Georgia is survived by her son, Mark Sergent and wife, Sheryl, of Walton and one grandson, Madison Sergent, of Morgantown. She is survived by brothers and wives: Bob (Cricket) Reed, A. J. “Jack” (Wanda) Reed, Nelson Reed, brother-in-law, Richard “Dick” Reed (husband of late sister, Marion Reed) all of Glenville, and many nephews, nieces and cousins.

A memorial service will be held at the Walton Union Church, Walton, West Virginia on October 12, 2014 at 1:00 PM followed by a fellowship dinner sponsored by the church. A private burial service will be held later at the Sergent Family Cemetery. In lieu of flowers, the family requests donations be made to the Friends of the Roane County Library c/o Spencer Library, 110 Parking Plaza, Spencer, West Virginia 25276 or the Roane County 4-H Foundation,` P.O. Box 105, Spencer, West Virginia 25276. The Taylor-Vandale Funeral Home, of Spencer, assisted with the arrangements.

When I went on A Ride in Stringtown on Sunday, I arrived at the unloading point for the four-wheeler (my cousin’s farm) early. I wanted to take some extra time to visit. I’d brought a batch of pepperoni rolls for Mark, but I was too early, their house was dark, so I left them in their fridge, and went next door to wander sentimentally through the Slanted Little House. After a time, I sat in one of the rocking chairs on the front porch, then decided to go see Georgia. My cousin came out of his house and waved to me, a pepperoni roll in hand, and I called out to him that I was going to see Georgia. I went into her house, found her in bed, and sat down in the chair beside her bed and knew instantly. Yet did not want to believe it. I knew my cousin was on his way to his morning check on his mama, so I waited.

My cousin is a very calm person.

Which I am not.

So when he confirmed that she had passed away in her sleep, I burst into tears.

Because he was supposed to WAKE HER UP.

I wasn’t Georgia’s niece, by the way. People often ask me why I call my cousin’s mother my cousin’s mother instead of my aunt. Georgia was not my aunt. My “cousin” Mark (Georgia’s son) is actually my second cousin, and Georgia is the wife of my dad’s first cousin, so she is technically the wife of my first cousin-once-removed. That is a mouthful, so I’ve always called her my cousin’s mother. As I wrote in my book and on my website, Georgia was “the lady of the manor, a workhorse, a slave driver, Miss Marple, and Martha Stewart all rolled into one.” To me, she was my stand-in mother, my grandmother, my best friend, my inspiration, my mentor, my pet.

“She came over to the Slanted Little House ten times a day, and if I was in the bathroom, she waited outside the door. With my mail. Or a plate of sandwiches. Or orders to come help her hoe.

She suffered from macular degeneration and liked me to drive her places.

She’d come over and say, ‘What time did you say you were going to town?’

Because I’m slow, I’d always say, ‘I wasn’t planning to go to town.’

Oh, my, that was my Georgia.

When I wanted to make that big change in my life and move to West Virginia, I went to Georgia. I asked her if I could live in the Slanted Little House. She said, without a second’s hesitation, “Of course, you’re family.”

As we sat in her house that morning, my cousin said to me, “You gave her a lot of purpose in her later years.”

I hope someday I will be worthy of the service she gave to me.