Yesterday, I spent a couple of hours doing nothing. I can’t remember the last time I wasted time like that. However, that was the whole problem–I felt like I was wasting time. And doing nothing isn’t necessarily a waste of time. In fact, doing nothing is good for you sometimes. It’s time to relax, rest, contemplate, fill the creative well. I’m pretty sure I used to know how to do nothing more effectively. Feeling guilty while you’re doing nothing is completely ineffective. Ruins the whole thing.

Doing nothing is a good time to read a book, brush your dog, watch TV, go through old boxes or scrapbooks, pet a cat, practice knitting, or pick flowers. Anything’s that a hobby or just for fun is allowed when you’re doing nothing. Chores or work aren’t allowed.

Writers, especially novelists, are seasoned experts at the art of doing nothing and getting away with it. They can always say they’re plotting in their heads, working out an intricate point of characterization or conflict, or trying to figure out whodunnit. I used to stretch out on the couch quite frequently and say I was plotting. Sometimes I was. Sometimes I wasn’t. Writers also watch movies, go on trips, read books and magazines, and all sorts of other things and call it work. Writers have the best job ever.

In the past few years, I’ve gotten into the routine of being constantly busy. Busy to the point of never getting it all done in a day, so I start out every day behind. I actually love what I do, so that makes it even more difficult to stop doing it all the time. Occasionally, I think about doing nothing, but it’s last on the priority list and I rarely get around to it. And if I do, then I feel guilty about it. Doing nothing isn’t as easy as it looks! And the boundaries can be confusing. If I write about doing nothing, is that something? Does that make the time I spent doing nothing a form of research for writing about it?

WAS I ACTUALLY WORKING THE WHOLE TIME? (Does that mean I can stop feeling guilty about it?)

I can remember when I was a little girl sitting on the driveway watching the ants running along the cracks in the cement, some carrying crumbs, some not. I had names for the ants. (Seriously. As if I could tell one ant apart from another.) Kids are the ultimate champions in the art of doing nothing.

I can’t remember the last time I even noticed an ant.

I went in search of an ant. Fortunately, I didn’t find one in my kitchen, but I did find one outside and I wondered what this tiny ant could tell me about doing nothing. Ants are busy little creatures, yet I used to spend a lot of time doing nothing with them. I watched it and waited for what seemed like a really long time and finally I thought I heard the ant speak. 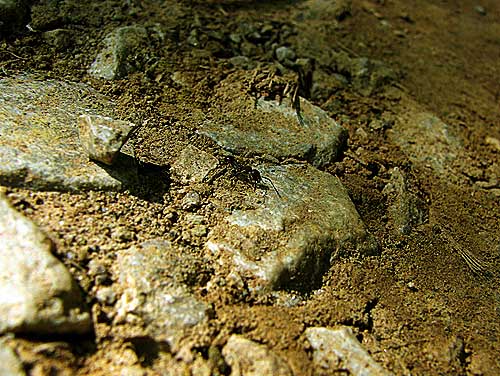 “My name is Buford.”