I went to Jackson’s Mill this week to speak to the “Purposeful Reading” group at a WVU Extension Service conference. They were a great group, very curious, and bought nearly every book I brought with me. If you’ve never been to Jackson’s Mill, it’s a neat place. It’s an historic 4-H camp, once the homestead of Stonewall Jackson, and now the home of the state 4-H camp every year. It’s near Weston, West Virginia. They have a farm there, hold weddings, and all sorts of things. I’d never been there before, and didn’t get to stay long this time, but it was an interesting trip. There were two young cows in the interstate on the way home and I’m still wondering about them. Traffic was swerving around them, dangerously. Where did they come from? Did their owner ever come get them? And how do you retrieve cows from the interstate? Did they survive? (Did all the drivers survive that had to maneuver past them?) I would be freaking out if my cows were on the interstate.

Back here on the farm, I’ve been busy working with new mama Blossom in the milking parlor. She’s still figuring out how to promptly (and without side trips) enter the alleyway and go into her milk stand, and still fussing over where’s baby while she’s doing her new job. Like any new mom, she never has her mind far off baby. 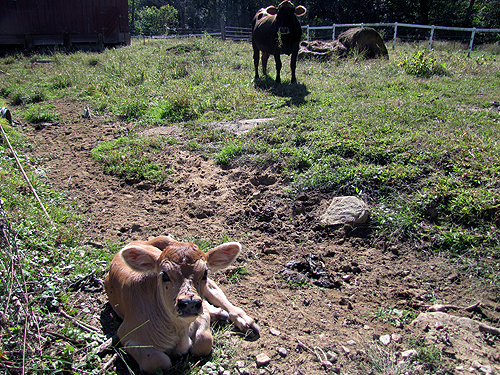 The flies are so bad right now. I spray Blossom and the baby every day, but they come right back.

The rest of the cows are lounging in the pastures. Moon Pie and Glory Bee are enjoying some time off. 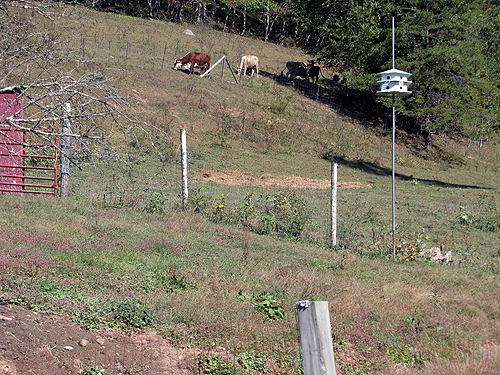 The calves are growing and the cows are all bred–except Blossom, so she will be enjoying some time with Beau the bull soon. 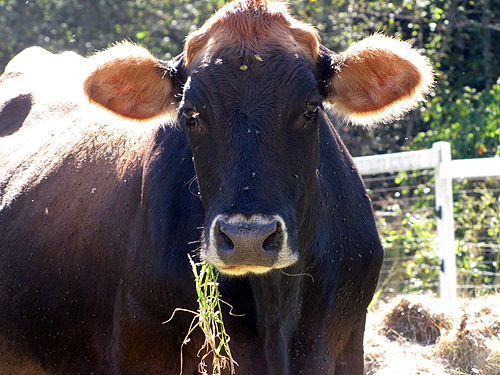 She had her mouth full there, heh.

With baby near her water tub. 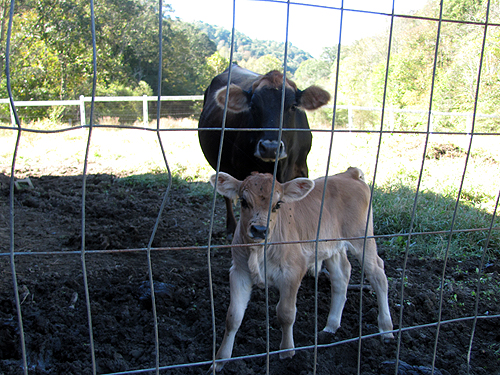 My days feel as if they’re revolving around running water for the cows. They invited me to have dinner with the group at Jackson’s Mill and I told them, “I have to go home and run water.” It does not feel like fall around here with the continuing heat and dry weather. 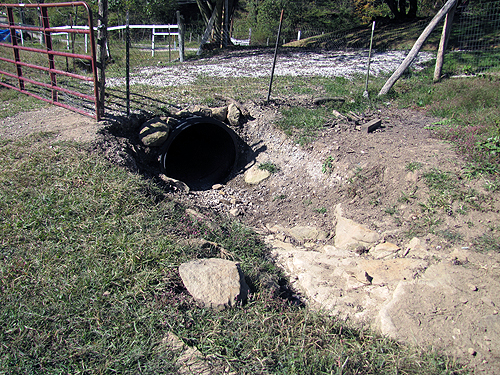 It’s dry, dry, dry here. For those of you remembering the flood four months ago, the area is slowly recovering, but far from recovered. Some businesses in Elkview and Clendenin have re-opened, but many are still closed, and some may be closed forever. There’s a “new normal” around here, and only time will tell if things will ever be–if not the same–at least close to what used to be called normal.

Meanwhile, back in the studio, I’m getting ready for a Taste of Sassafras Farm this weekend, a hard cheese workshop next weekend, and more goats and cows and soap workshops coming up all the way to early December when this year’s workshop season ends. (See Retreat & Workshops — there’s still time to sign up for one of this fall’s workshops!) This winter, I’m planning to focus on more writing and ramping up my little side businesses selling goat’s milk soaps and goat’s milk fudge and other things. 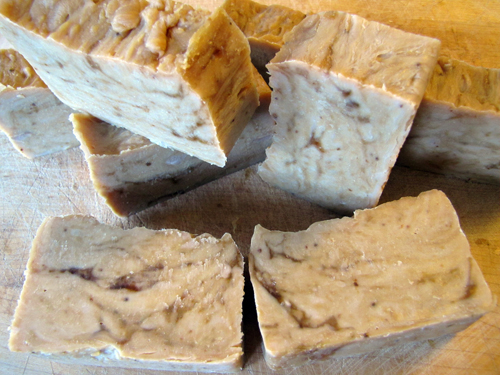 See more in the Soap Store. 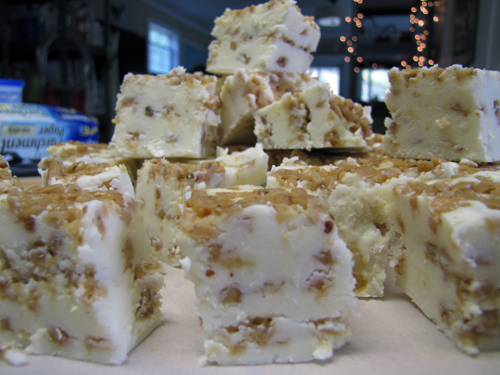 The latest batch of laying hens is feathered out and mostly hiding in a corner of the chicken house. 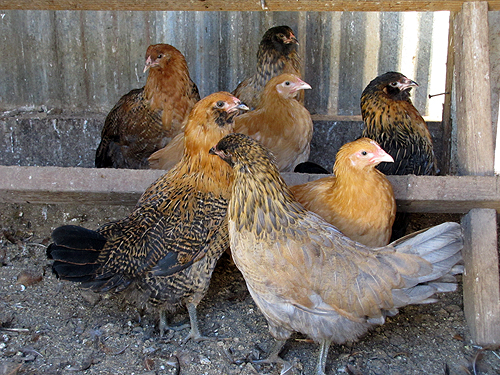 They’re scared of the big hens!

And I’m getting ready for the last batch of baby hens for the year. Until last year, I hadn’t gotten any new laying hens for a number of years. Most of my hens were six to eight years old. I had these chickens at Stringtown Rising, that’s how old they were! They’ve been dropping from old age this year. Recently I found one dead in a nesting box. She died where she was happiest–where she did her work! I got a batch of Golden Laced Wyandottes last year, who are laying now, and this batch (pictured) is Buff Orpingtons and Araucanas. (There were more Buffs, but the pigs had a taste for Buffs….) The new batch of chicks coming in is a mix of Silver Spangled Hamburgs, Speckled Sussex, Brown Leghorns, White Rocks, and New Hampshire Reds. It’s an interesting mix of breeds I’ve never had before. I’m also getting a new batch of ducklings–Blue Swedish, Black Swedish, and Cayuga.

It’s the late in the year to get chicks, which makes it slightly crazy. I’ll have to house-raise them until they’re big enough and feathered enough to go to the barn for further growing before being introduced to the scary big chickens in the chicken house.

Of course, if the weather keeps up, I could put them in the barn when they arrive. But don’t you know that once I have new chicks, that’s exactly when the weather will finally change?!