Hard to believe that it’s been just a few weeks shy of two years since these fence posts went in along the road in front of our farm. 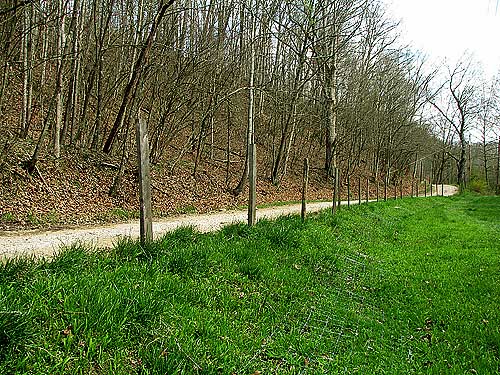 That was back when our new farmhouse was still just a twinkle in my eye. It would be a year later before the house was built, and during construction and since then a lot of other business has taken the focus off completing the meadow bottom fencing project. (By the way, if you want to look back on the post where this fence began and my dreams about the farm this could one day be, you’ll see the phrase “chickens in the road” in there. It was later that same year that I redesigned my website and took on the name Chickens in the Road. I still don’t have chickens in the road–due to last year’s incubator shortfall–but we’re in the process of acquiring chickens en masse this year so I can free-range them and they will no doubt soon be in the road, on the porch, and coming out our ears.)

This weekend, completion of the fencing shifted into high gear. 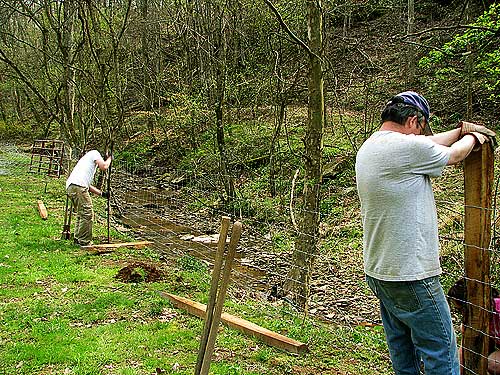 52’s friend John and his whole family turned out to work. (Pictured above: John and his son, Johnny.) 52 directed the crew as gates and fencing went up on the first section of meadow bottom. 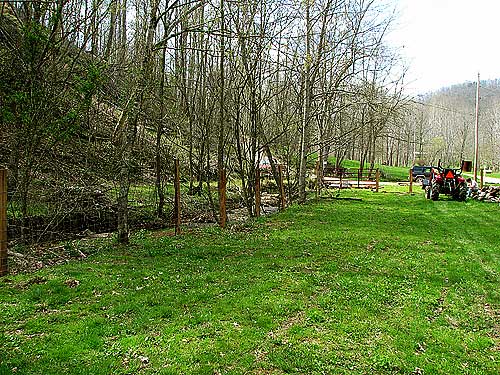 Eventually, the meadow bottom will be divided into three separate pastures with gates connecting each area for the sheep to be rotated. (I’m talking about the big sheep. Annabelle will be staying in the goat yard by the house. She will, however, be losing her blankie buddy as Coco will be put on duty with the sheep at night.) We’re fencing in the flat ground between the road and the creek, mostly fencing out the creek (for environmental reasons) except where we have to cross it. We have our well down there and can get water for the animals without the creek. In fact, we have a second well with water now. Remember the first well we drilled, the 240-foot dry hole? There’s water in that well now! (Not sure what happened, and maybe we will find that it’s dry in certain parts of the year, but it’s there if we want to use it when there’s water in it.)

I had my people hard on the job, too. 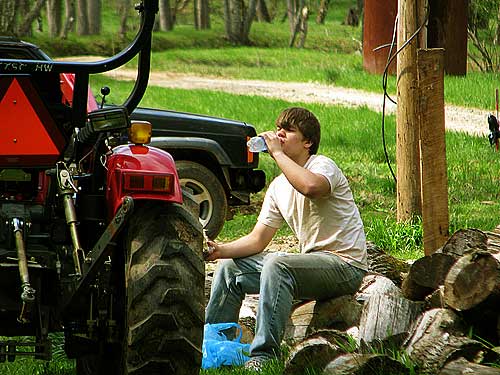 I knew I shouldn’t have brought him any lunch.

There he goes! He’s a worker bee! 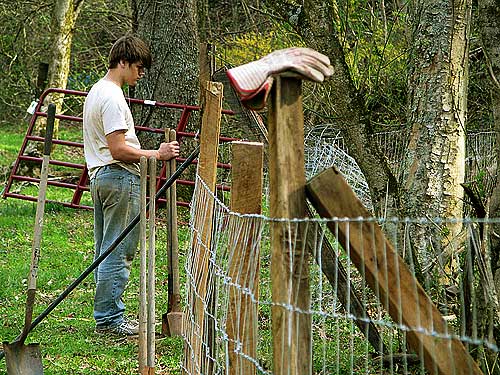 Wait…. NOW there he goes. 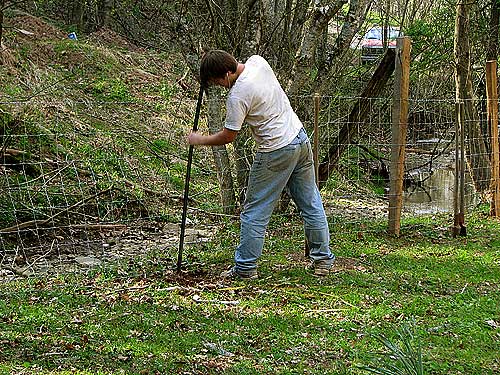 With his iPod in his ears.

This concrete slab in the meadow will be fenced separately to be used for a pig pen. According to what we’ve been told, it was used in the past for that purpose. I see piglets! And bacon. 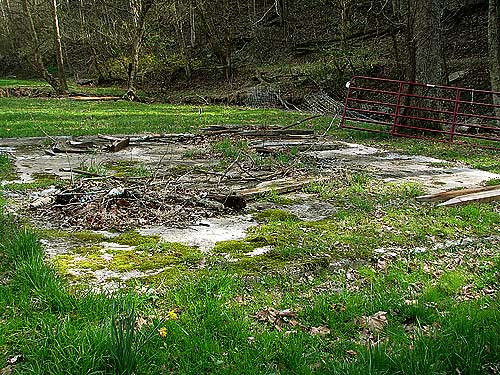 I’m having trouble with the thought of piglets and bacon. Piglets = cute. Bacon = frying pan. This will be the first time I’ve acquired an animal specifically for food. I’d better not let it talk to me. Or name it Wilbur.

John’s wife and even their daughter were working. 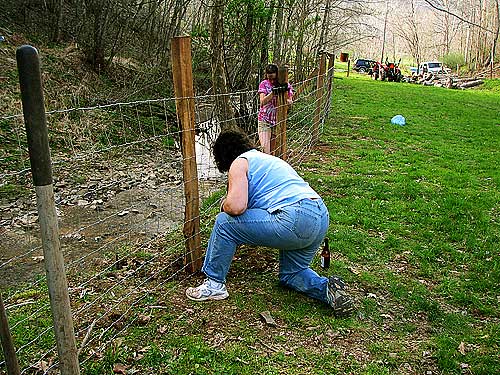 Molly’s a cute little thing. She’s Morgan’s age. Look at what a worker bee she is! 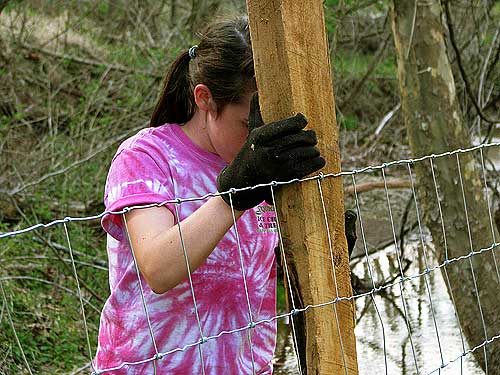 She could show the Princess a thing or two about work! 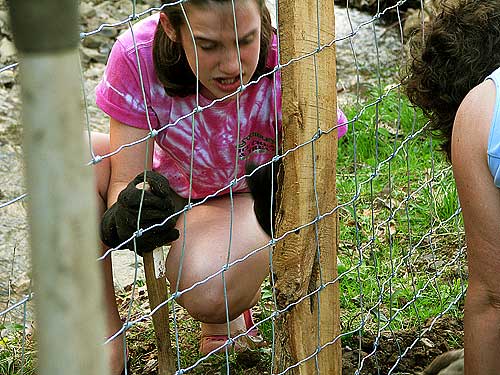 Princess arranged to be occupied for the entire day between a softball game and a birthday/slumber party. The Other One (Ross) was flipping burgers at McDonald’s.

I was pretty busy, too. 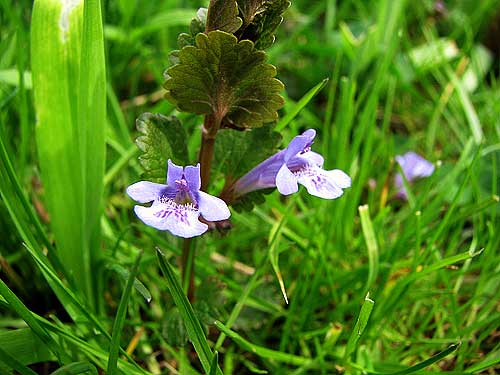 Somebody had to make all the food (look at that fresh-sliced homemade bread! and molasses cookies hot out of the oven! okay, I made those for Clover, but I let the worker bees have some, too), take all the lunch orders, fix all the sandwiches, and haul back and forth up and down the hill. 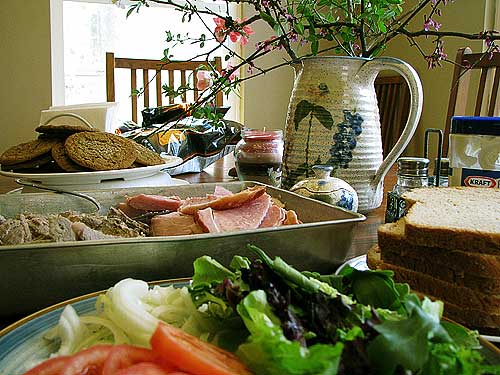 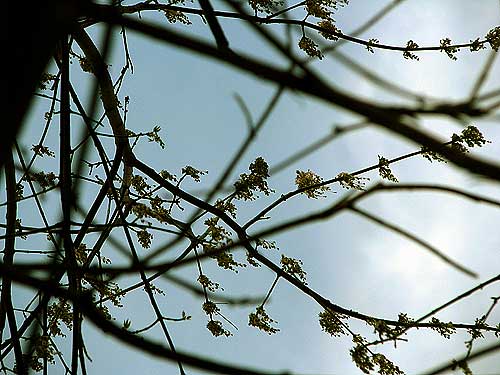 Still, they were kinda making me look bad, so I told them they had to quit that. I made them get in the car with me and go across the river and down the road…… 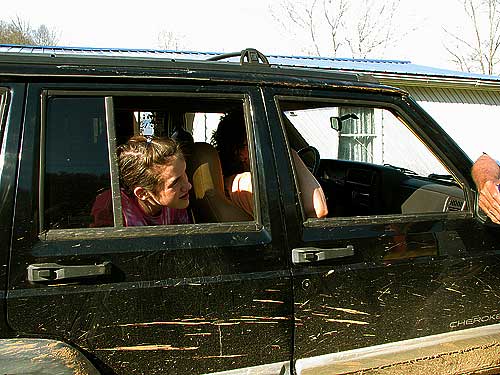 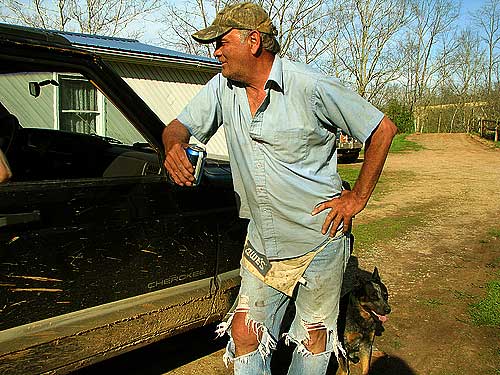 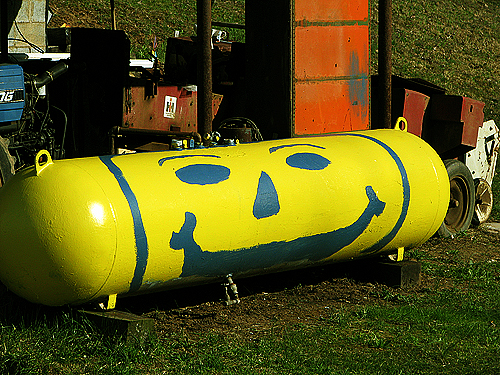 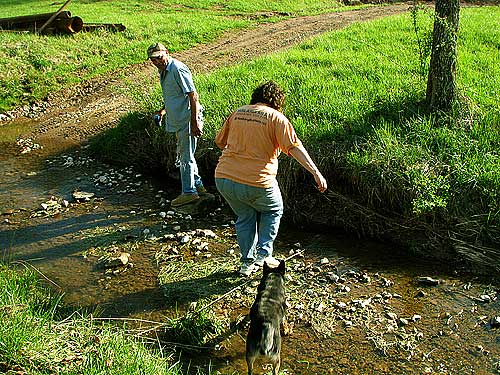 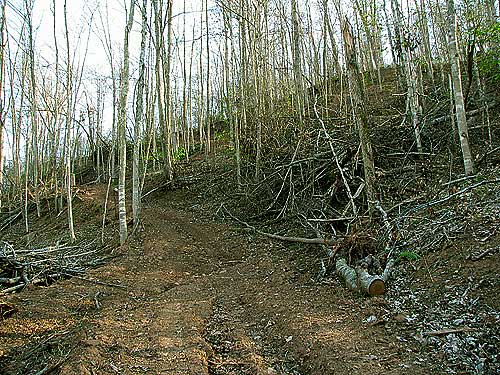 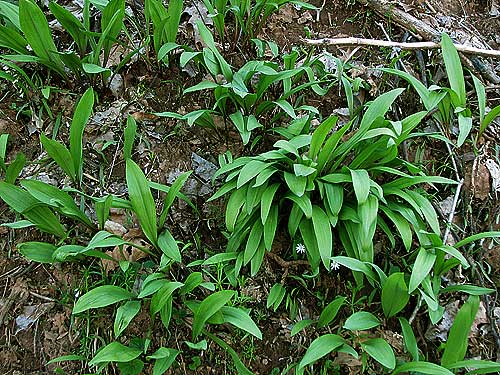 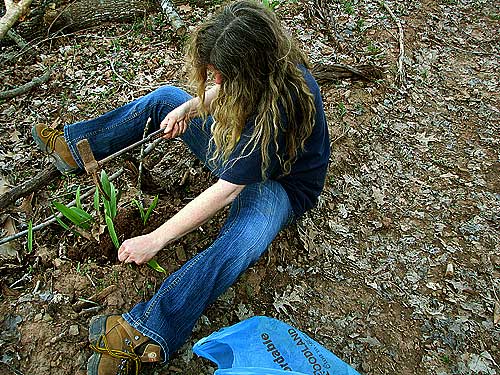 We left with two bagfuls of ramps–one for us, one for them. 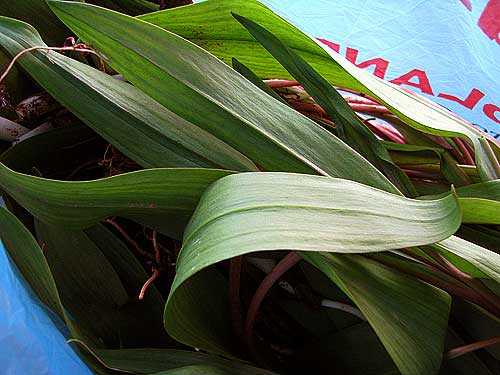 I’ll be cutting off the root ends and planting them on my hillside again. The ones I grew this year also came from Larry’s farm. That turned out good, so I might as well do it again. The more ramps, the merrier.

I think I’ll plant them somewhere convenient since trudging up Larry’s hill was a lot of work.

I truly deserve to kick back now in the heavily rampified aroma of my Jeep and observe the fencing bees from afar. The meadow bottom project has a long way to go. 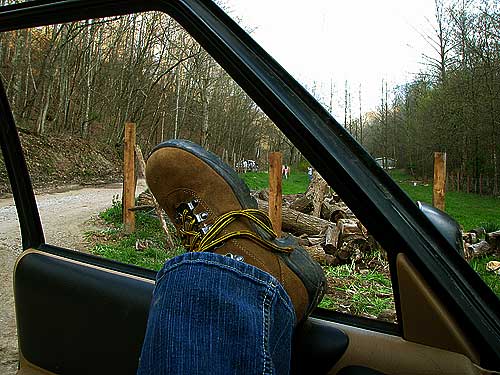 I’m resting on my ramps. I might even drive up the hill and get me a glass of wine.

What? WHAT IS THIS? 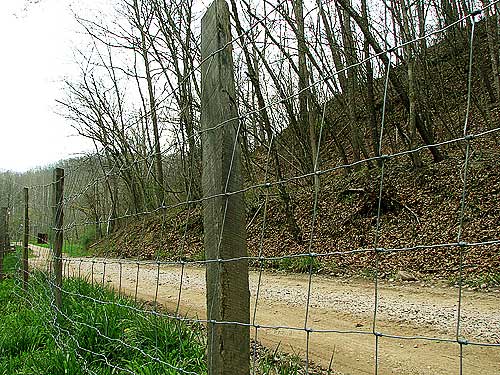 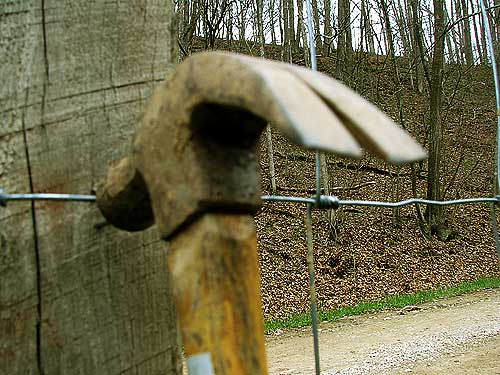