I was having a conversation with a friend about people who are picky eaters the other day, and this isn’t a post about picky eating, but it is about influences from childhood, which includes food–and it made me think of Martinsburg. Many of the core values and behaviors we carry through our lives are developed in childhood. Sometimes we try to give our children some kind of “experience” that they will carry with them, but more of the important influences may actually, I believe, come unintended or for other purposes than what they result. My parents didn’t spend a couple of years taking me to Martinsburg, West Virginia, every weekend to shape my lifelong attitude toward food–but it did impact my perspective on food as well as other things. Of all the places I’ve never lived, I was influenced by Martinsburg more than any other.

Back when I was around eight years old, my parents moved back to Silver Spring, Maryland. We’d lived in Silver Spring before, and after an odd ten-month stint in Alabama, we moved back. The whole back and forth moving around was a little discombobulating at the time. I was too young to understand the adult dynamics behind the moves, and they really don’t matter now to this point, but suffice it to say at the time we moved back to Silver Spring, my dad didn’t have a job. He started selling life insurance, which was also strange, since he was a longtime preacher. And then one day it was announced to us kids that he was going to start preaching at a little church in Martinsburg. But we weren’t moving to Martinsburg. I think my dad would have liked to move to Martinsburg, but my mother was having none of it. So he kept selling life insurance during the week and we traveled to Martinsburg every weekend.

I was also too young to really understand the issues going on with this little church at the time. It was a Church of Christ, of course. My father was a Church of Christ preacher. The church was small, and struggling for some reason. And they didn’t have a preacher. I suppose they must have paid my father something, but I doubt it was much. It was a small white building on a corner, with a parking lot that had a steep bank to one side. It was walled, and walking as if on a balance beam at the top of the wall was a good after-church activity while the grownups were talking. Next to the church was the (vacant) preacher’s home, where we stayed on weekends. There was very little furniture in the house, just some make-do beds to get us by. This was the 1970s and the inside was painted in bright, vivid psychedelic colors. My mother hated it, but I thought it was cool. Orange and purple walls! Who knew you could paint your house orange and purple! My room at home was painted a sedate off-white. I wanted to move there, and not just for the orange and purple walls. I loved the whole small town vibe of the area. (I haven’t been to Martinsburg in years, and I’m sure it’s much more built up now.) You didn’t have to go far, just a few minutes, and you were smack dab in the middle of West Virginia farm country.

Sometimes on Saturdays my parents went shopping. My mother loved antiques, and there was one big antique store there that she particularly liked. I liked it, too. I collected little glass animals that “lived” in my dollhouse, and I would save my money to buy a new glass animal every time we went. (These weren’t antiques, of course, just junky doo dads they sold near the register.) My dad also bought me a gold band there with a little chip of a diamond that has been a special ring to me ever since, and the lamp still on my night table today is a lamp I picked out in that store.

Picky eating wasn’t allowed in our home–if it was on your plate, you ate it. Even if it was cottage cheese with cling peaches on top and you thought it was nasty. (I’ve talked about cottage cheese and cling peaches before, here and here.) But this directive–eat whatever is in front of you–was even further slammed when we were in public, i.e. at someone else’s home. The preacher’s family was expected to be models of good, and polite, behavior. We were admonished many times that whatever was served to us, we were to eat it–and happily! To me, at least, this was mostly not a burden. I didn’t give too much thought to the situation. I was ever an obedient child. I think most of those admonishments were meant for my sister, who was known to spend HOURS after dinner at home sitting with untouched peas on her plate, tears running down her face and a stubborn set to her mouth, in a battle with my father over her vegetables. Me, I just scraped those peas onto the spoon, popped them in my mouth, and scampered off to play before it got dark! I couldn’t understand all the drama, and I had other stuff to do.

Food in Martinsburg, however, was something outside my mother’s usual daily dinner table repertoire. Since my father was the visiting preacher (even though his “visiting” went on for a couple of years) and they seemed to consider him to be doing them a favor by coming every weekend to preach for them and help the church get back on its feet, the congregation took it upon themselves to take care of his family the way country people take care of people. Every Sunday after church, a different family took us home for Sunday lunch. The majority of the homes we visited for these Sunday lunches were out in the country. They had huge gardens, and their tables groaned with plates and platters and bowls of vegetables and fruits and casseroles and meats, desserts and cakes and pies. It was like a holiday feast every week. Some foods were weird, like rhubarb or okra. Things my mother didn’t cook at home. And because we were at a different family’s home every week, things would be prepared and served in different ways. Week after week after week. It was an exposure to different family’s tastes and favorites and “weird” preferences that I couldn’t have gotten otherwise at such a young age where most of the time you’re usually just eating your mom’s cooking. It was also a great exposure to home cooking from scratch, beyond the cooking my mother did at home. My mother loved to cook, and she baked a lot, but she also enjoyed her suburban life and the grocery store and convenience foods upon occasion. There were no convenience foods at these Sunday farm lunches. The only other time we ate this way was when we visited the Slanted Little House once a year and dined at my great-aunt Ruby’s table. But that was once a year. This was every week.

As I said, I was never a picky eater to begin with, but this constant exposure to different foods over the time we spent in Martinsburg was an experience I’ve never forgotten. It left me with an enthusiasm, curiosity, and adventurous attitude toward food that I’ve carried with me over my life. It’s not something my parents set out to give me, or that they probably thought much about other than hoping their children weren’t going to embarrass them at the table. My parents were in the midst of their own transitional period and just muddling through the messy middle of their own lives, trying to keep it together and figure out what they were going to do next. Eventually, my dad quit selling life insurance and got a full-time preaching job closer to home. We continued to live in Silver Spring until we moved to California by the time I reached high school. Martinsburg became a distant memory other than the little church bulletin that came in the mail once a week for years to follow. We never went back to Martinsburg.

Though, every time I try a new recipe or eagerly reach for some new food that I’ve never tasted before, I know Martinsburg is still with me. And whenever I’m muddling through the messy middle of my own life, I know–or at least hope–that my children, too, are learning something that might surprise me. 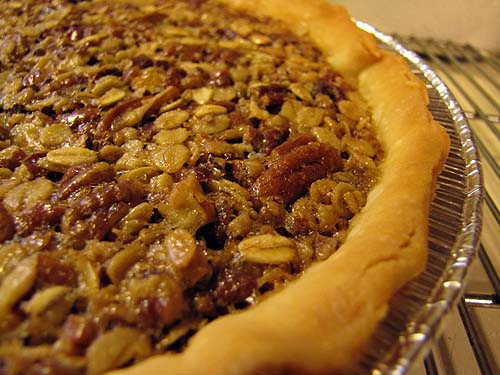 And sometimes, you know, that’s the very best thing about messy middles. There’s always an unexpected sweet slice of pie in there somewhere.

P.S. The pie pictured is a variation on this pie, made with half oatmeal, half pecans (and, of course, still with rum, but no coconut or walnuts).